Editor’s Note:  This is not a press release, but a copy of a public document providing more details involving the arrest of Nassau County resident Jeffrey Register following the January 6, Capitol Hill insurrection.

1. Your affiant, [Name Blacked Out] is a Deportation Officer for U.S. Immigration and Customs Enforcement and has been so employed since January 2008. Since October 2019, I have been assigned as a Task Force Officer to the Federal Bureau of Investigation (“FBI”), Northeast Florida Joint Terrorism Task Force (JTTF”) where I conduct a variety of investigations in the area of counter-terrorism.  In the performance of my duties, I have investigated and assisted in the investigation of matters involving violations of federal law related to domestic terrorism, international terrorism, weapons of mass destruction, and bombing matters. I have also been involved in searches pertaining to domestic and international terrorism matters through the execution of search warrants. Currently, I am tasked with investigating criminal activity in and around the Capitol grounds on January 6, 2021. As a Deportation Officer and Task Force Officer, I am authorized by law or by a Government agency to engage in the prevention, detention, investigation, or prosecution of a violation of Federal criminal laws.

4. As the proceedings continued in both the House and the Senate, and with Vice President Pence present and presiding over the Senate, a large crowd gathered outside the U.S. Capitol. As noted above, temporary and permanent barricades were in place around the exterior of the U.S. Capitol building, and U.S. Capitol Police were present and attempting to keep the crowd away from the Capitol building and the proceedings underway inside.

7. During national news coverage of the aforementioned events, video footage which appeared to be captured on mobile devices of persons present on the scene depicted evidence of violations of local and federal law, including scores of individuals inside the U.S. Capitol building without authority to be there.

8. According to records obtained through a search warrant served on Google LLC, a mobile device associated with ***********@gmail.com was present at the U.S. Capitol on January 6, 2021. The name associated with that account, according to Google, is “jeffrey register,” and the account’s recovery phone number is *** ***-****. Google estimates device location using sources including GPS data and information about nearby Wi-Fi access points and Bluetooth beacons. This location data varies in its accuracy, depending on the source(s) of the data. As a result, Google assigns a “map display radius” for each location data point. Thus, where Google estimates that its location data is accurate to within 10 meters, Google assigns a “maps display radius” of 10 meters to the location data point.  Finally, Google reports that its “maps display radius” reflects the actual location of the covered device approximately 68% of the time. In this case, Google location data shows that a device associated with ***********@gmail.com was within the U.S. Capitol on January 6, 2021 from approximately 2:17 p.m. until 4:38 p.m. Google records show that the “maps display radius” for this location data was less than 100 feet, which encompasses an area that is entirely within the U.S. Capitol building.

11. On February 1, 2021 your affiant learned of a publicly accessible video (accessible on youtube.com) possibly depicting REGISTER inside of the Capitol on January 6, 2021. A photograph of REGISTER was then obtained via the Florida Department of Motor Vehicles for comparison against the subject in the video. Upon viewing the video, your affiant was able to identify a subject that appears to match the physical attributes of REGISTER based on a photograph comparison to his

12. During a review of the open-source video, your affiant identified REGISTER as a white male with black glasses and a salt-and-pepper beard. REGISTER was wearing dark pants, tan shoes, and two sweatshirts. The inner hooded sweatshirt was black. Over that, REGISTER was wearing a green or gray hoodie sweatshirt, the back of which featured an American flag and lettering stating “God, Guns, & Trump.” Under the inner black hooded sweatshirt’s hood, REGISTER wore a black skullcap with lettering stating “2020 Keep America Great.” All of the times are depicted in the three images below. REGISTER is circled in red. 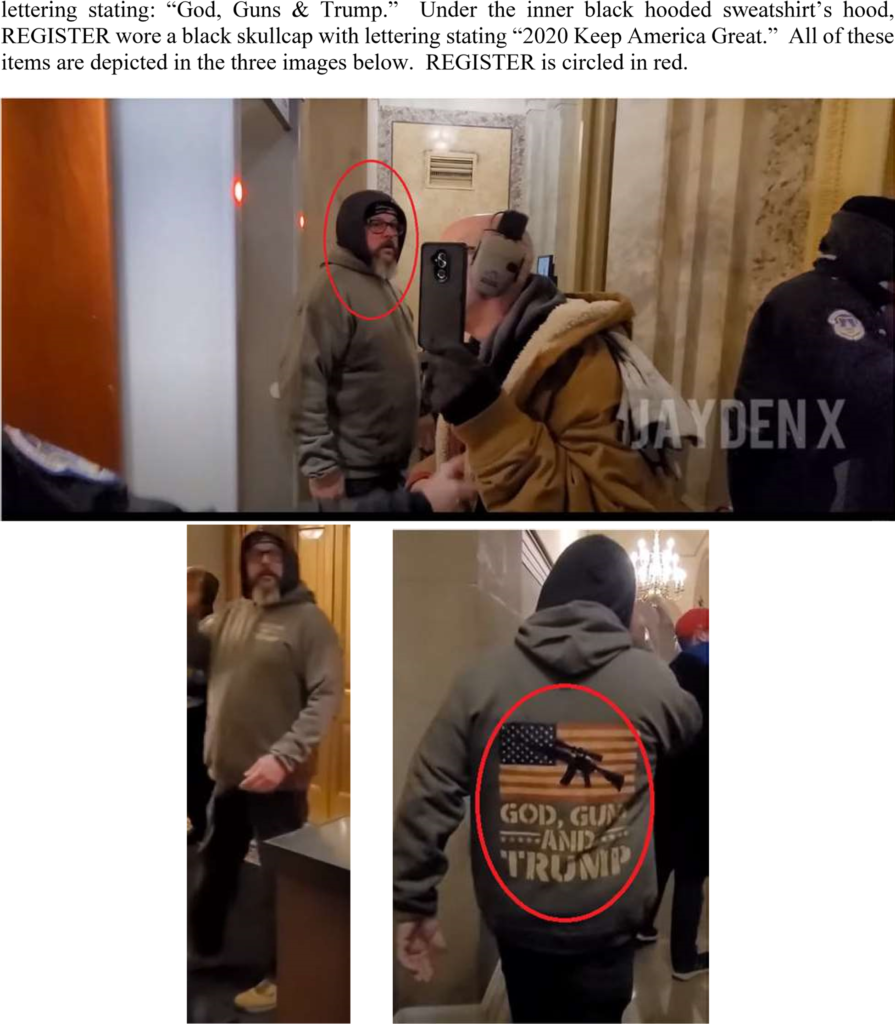 14. REGISTER is seen a few more times in the video, walking through the Capitol building. At approximately the 12:44-minute mark of the video, REGISTER can be seen running past several U.S. Capitol Police officers who are attempting to hold back the crowd:

15. REGISTER is last seen at approximately the 13:27-minute mark of the video, still within the Capitol building. Shortly prior to that time, REGISTER turns to face the camera, and his face is again clearly visible. Throughout the duration of the video, I identified REGISTER based in particular on his facial features, his distinctive facial hair, glasses, and the lettering and image on the back of his sweatshirt. The locations where REGISTER was present in this video on January 6, 2021, were “restricted building or grounds; under 18 U.S.C.:1752(a) and within one of the “Capitol Buildings” under 40 U.S.C.:5104(e)(2)

16. On February 24, 2021, your affiant conducted a consensual interview of REGISTER at his place of employment, [Employment Location Left Blank], Jacksonville, FL 32220. During the interview, REGISTER stated that he departed Jacksonville, FL by car for Washington, D.C. on January 5, 2021, arriving early on the morning of January 6, 2021. During his trip to Washington, REGISTER stayed at the Holiday Inn Alexandria- Carlyle, located in Alexandria, Virginia. REGISTER stated that he departed Washington, D.C. on January 7, 2021. After initially denying entering the Capitol building on January 6, 2021, REGISTER ultimately admitted to having entered the Capitol building. REGISTER was shown the photograph below and confirmed that he was the individual in that photograph with glasses and a sweatshirt that I had previously identified as REGISTER. REGISTER then admitted that he deleted photographs from his phone and claimed to have “factory reset” his cell phone in order to, in his words, delete what might be proof that he entered the building. REGISTER stated he was aware that Congress was in session and was in the process of certifying the vote. REGISTER also stated that his goal in entering the Capitol building was to affect Congress’s decision on that certification of that vote, and that he wished he had been able to enter the House chamber during the certification process to show his support for President Trump.

17. During this interview, your affiant was able to confirm with REGISTER that his phone number is ***-***-**** and that his address is [address blacked out] Fernandina Beach, FL 32034. REGISTER later provided your affiant a photograph of his hotel parking pass from his trip, as well as two photographs REGISTER stated he had taken on the exterior of the Capitol building on January 6, 2021. These photographs are below. 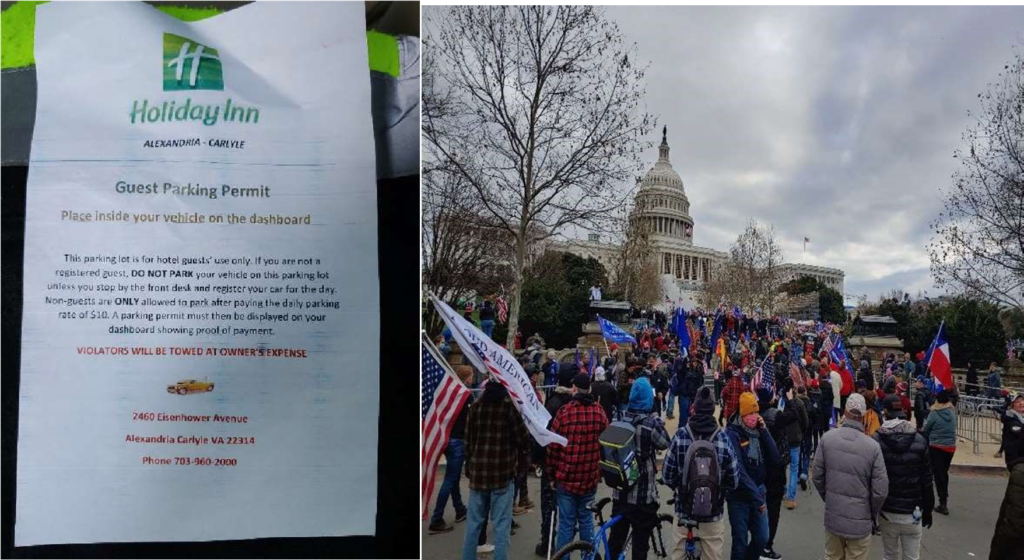 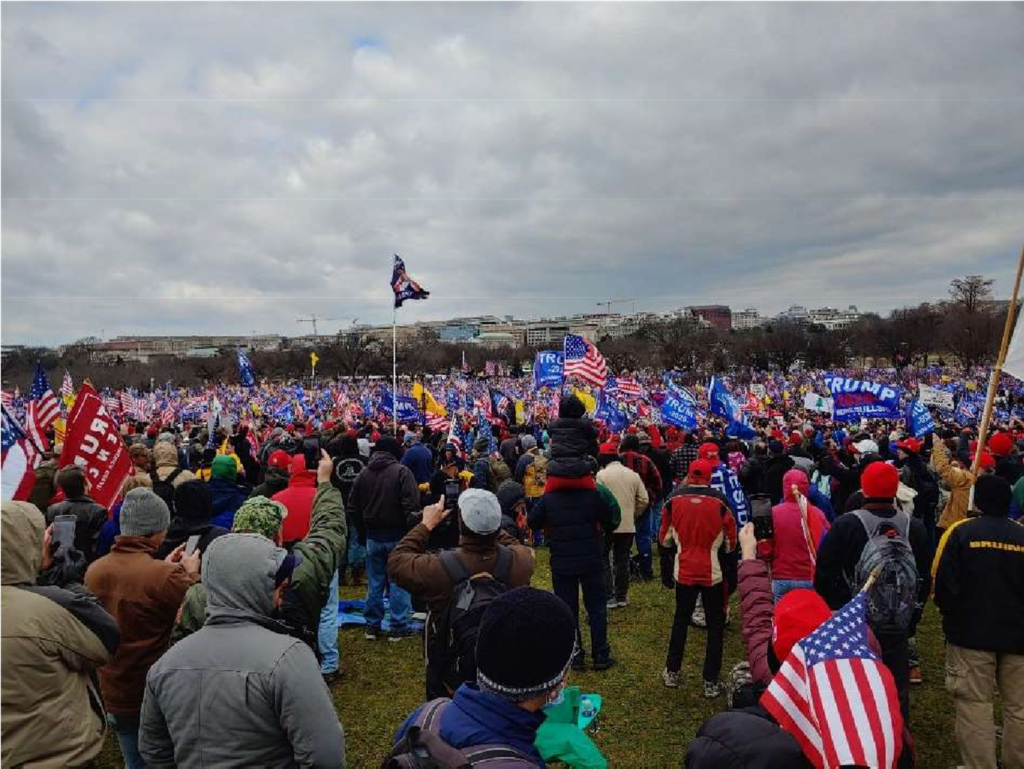 18. On March 3, 2021, your affiant contacted the Holiday Inn Alexandria-Carlyle to e manager on duty confirmed that REGISTER did stay at the hotel from January 6, 2021 through January 7, 2021. The manager sent to the affiant those dates, and that the individual had used the phone number ***-***-**** and had provided