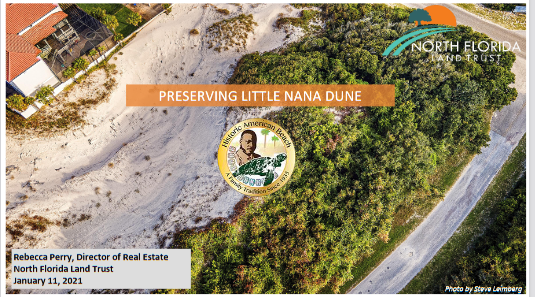 January 11, 2021 was a very busy day for the Board of County Commissioners with two workshops held early in the day followed by its regularly scheduled Monday night meeting which commenced at 6PM.

A workshop on the Conservation Lands Acquisition and Management Plan (CLAM) featured a presentation by Rebecca Perry of the North Florida Land Trust (NFLT). Created in 1999, the NFLT “is an organization focused on protecting lands of ecological, agricultural, and historic significance.”

Recently, the NFLT worked with the City of Fernandina in an effort known as the Amelia Forever Campaign. That effort got underway in 2019 to raise money to acquire Amelia Island’s remaining natural spaces. In December 2020, it was announced that they had purchased three acres to be added to the Egans Creek Greenway, splitting the cost evenly with the City of Fernandina.

Through the Department of Planning and Economic Opportunity, Nassau County would like to establish a similar program. Many may recall that a referendum had been planned for the November 2020 ballot to help fund the creation of the CLAM by allowing the County to issue up to $30 million in general obligation bonds. And while BOCC voted unanimously to strike that referendum from the ballot as a result of COVID-19, the commitment to the CLAM plan remains strong.

About the program, County Manager Taco Pope had this to say, “This is a generational program that will pay dividends for decades to come.”

A long overdue and critical program, but akin to slamming the barn door closed AFTER the fire in this county. Nassau County has already lost many opportunities to purchase valuable parcels and has even given away a few critical parcels in strategic locations (Outward Bound parcel in Chester) There is far too much focus on organized sport facilities county-wide vs. undeveloped space for outdoor recreation in Nassau County. We have finite beaches in the county, yet growth and development continues unabated. How many recreationists, horses, vehicles and pets can we accommodate on county beaches?

I agree with Mr Leary’s assessment.

Most of the Golden Isles are Natl. Parks.

There is better busines than just expanding your tax base and raising taxes.

It is never too late to acquire land for conservation. This should have been a program initiated 20 or 30 or even 40 years ago, but at least it’s happening now. Also, I don’t remember seeing any notice of the county meetings in the News-Leader or Fernandina Observer. This is of such high public importance it should’ve been advertised everywhere.

Marlene, how can we expect the law to be followed when the l...
wpDiscuz
3
0
Would love your thoughts, please comment.x
()
x
| Reply
Comment Author Info