A Friend of Fernandina and The Observer Has Passed

Editor’s note: We were saddened to learn of the death of Malcolm “Mac” Noden. While serving as a writer for the Fernandina Observer, Mac wrote articles on various aspects of tourism. He served as a professor at Cornell’s acclaimed School of Hotel Administration for 32 years. Mac loved his work, and his students loved him. His articles for the Fernandina Observer ranged from “Tourism – What about seasonality and periodicity? to “Tourism – We reap what we sow”

Mac was an active community member and gave many hours of service to various non-profits. He will be missed. Our condolences to his family. 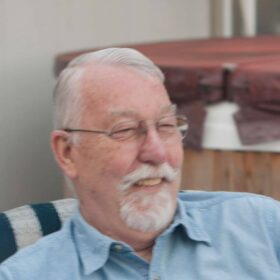 Malcolm was born in 1938 in Manchester, England to Harry and Violet Noden. When he was about 19 years old, he moved to New York City to work with what was then British Overseas Airway Corporation (now British Airlines). He also attended classes at Columbia University, where he met his future wife, Barbara. They married in 1958 and moved to Florida, where they had three children. Malcolm continued work in the travel industry, specializing in travel arrangements and tours. The family moved to Mt. Vernon, N.Y., and then to Valhalla, N.Y.

Malcom managed a large travel agency in Manhattan for a number of years. Malcolm and Barbara then decided that they did not want to continue to raise their children in New York City, and explored other options, including homesteading in the Canadian wilderness. Eventually, they decided to move to the Finger Lakes region of New York, where they bought a small farm. Malcolm managed another travel agency in Ithaca before being recruited to Cornell University, where he both ran the financial aid office of the Hotel School and became an instructor there, specializing in travel, marketing, and airlines.

In 2003, Malcolm and Barbara retired to Fernandina Beach where both became active in their church and various charities. Malcolm served as chairman of the board of what is now Starting Point, a charity assisting those with substance abuse problems. Malcolm was an elder in the church as well as chairman of the finance committee, and for some time also served as a Stephen Ministry leader. He mentored students as part of the Take Stock in Children program. Malcolm also received a national award from the Daughters of the American Revolution as a naturalized U.S. citizen.

Malcolm’s parents, brother Stuart, and wife Barbara predeceased him. He is survived by his daughter Alexandra Noden and her husband, Martin Mosko; his son Stephen Andrew; and his son Gregory Todd, his wife Evelyn Hooper; and two granddaughters, Mariah and Leah Noden.

Donations may be made in Malcolm’s name to the First Presbyterian Church, or America’s Youth.

I always enjoyed reading Malcom’s articles and understanding his perspective. Condolences to his family and friends.