Has Fernandina Beach City Hall come to the end of its useful life?  Should the City taxpayers invest $3M in repairing, rehabilitating and restoring the significantly modified structure that was built in 1904? Should a new City Hall be built on the site of the current one or on the lot next door?  Should the City just patch and fix the worst problems and leave the dilemma to a future City Commission?

The Fernandina Beach City Commission (FBCC) grappled with these questions and others during a workshop held on September 21, 2021 in City Hall Commission Chambers.  Participating in the discussion was Jody Driggs, Silling Architects Principal, and Charlie George, City Engineer.

There was no consensus among Commissioners on a future direction beyond taking steps to insure that City Hall today does not endanger the health and safety of those who work or visit there.

The discussion on the future of City Hall will continue, as more reports are provided for Commissioners to consider over the coming months.

Fernandina Beach prides itself on its rich history, much of which is evident in its 55-block Downtown Historic District, recognized officially on the U.S. Department of Interior’s National Register of Historic Places.  In addition to many historic residences, churches, and places of business, there are a few prominent public buildings included in the Historic District:  the U.S. Post Office and Customs House (1912); the Nassau County Courthouse (1892); the former Nassau County Jail, which today houses the Amelia Island Museum of History (1938); and Fernandina Beach City Hall (1904).  The first three — Post Office, Courthouse, Museum — in the recent past have undergone significant rehabilitation or restoration.  The odd building out is City Hall.

Looking at Fernandina Beach City Hall today, one would be forgiven for not believing that it is an historic building.  In poorly conceived and executed attempts to modernize and increase  space for City functions, most of the exterior historic elements have disappeared from sight, leaving many to wonder if the building has not already lost its historic significance.

The 1956 renovation, at a cost of $19,572, added a new wing on the west elevation.  It also removed archways, towers and chimneys.  The building was resurfaced with stucco, windows were replaced, and the building was re-roofed.  The municipal courtroom was remodeled to serve as Courtroom/Commission Chambers.  A vault was installed to store City records, which had previously been kept in the attic.

In 1971, the building underwent another renovation (cost unknown).  An east wing was added to accommodate the Rescue Unit and provide an office for the Fire Chief.  City Commission chambers, which had been relocated a number of times throughout the building, was moved to the Police Station across the street in 1972.

In 1995 there was another renovation, this one at a cost of $350,000, with most of the work performed by Public Works Department employees.  The Fire Department relocated to Fire Station No. 1 on 14th Street.  The fire truck bays in City Hall were remodeled into today’s City Commission Chambers.  HVAC, plumbing, electrical and communication lines were replaced.  Added were ADA restrooms, an elevator, a landscaped parking lot, three interior customer service counters, a drive-up window with night depository, and a drive up public notice board.

Following the relocation of the Police Department to its current location on Lime Street, its downtown building was demolished, resulting in more parking spaces and a small park at the southwest corner of 2nd and Ash Streets.  It might be of interest to history buffs to note that the building that had housed the Police Department prior to the move was formerly the Fernandina Beach Coca-Cola bottling plant.

On October 20, 2020, the FBCC unanimously approved Resolution 2020-151, a professional services agreement with Silling Architects, Inc, to conduct a needs and site assessment for City Hall. Phase 1 of Silling’s pre design report was presented in March 2021. The report indicated that while there is currently approximately 6,000 square feet of usable (net) square feet in City Hall, 24,000 square feet of usable space would be needed to accommodate those departments currently housed in City Hall and to return offices previously housed at City Hall: Legal, Finance, Information Technology and Utility Billing. Renovation of City Hall would not be sufficient to allow this to occur.

The report summarized in part:

In identifying the spatial needs of various departments targeted by the City Administration for location within a more consolidated downtown campus, the Space Program was developed through observation and documentation of existing operations and spaces, reinforced through personal interviews with key departmental leaders. Space standards for the various position hierarchies have been established to ensure equity and efficiency across the different work groups. Space allocations are responsive to current and future needs both in terms of personnel and processes, and questions have been posed to each department as to the changing nature of the delivery of services and the administration of municipal rules. Based both on long-range population growth predictions and in response to probable paperless / on-line processes and potential telecommuting workforce, general increases for added staff, file storage, and support spaces are moderately projected. With that said, several city departments are currently operating in available space that is either less than required or poorly arranged to meet their operational needs. 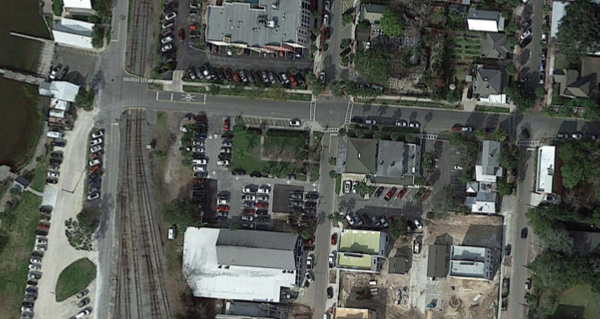 An assessment of the condition of the existing City Hall building located at the corners of S. 2nd and Ash Streets, as well as the city-owned parcel consisting of a greenspace and surface parking area across S. 2nd Street to the west was performed with a focus on determining their appropriateness to serve the future spatial needs of the Space Program. As outlined in the Historic Significance portion of this document, it is suggested that one and two-story additions to the historic structure be removed, taking the facility back to its historic footprint and massing. The various additions over time were not designed or constructed to honor or be compatible with the historic building composition, and because they were poorly constructed and did not employ materials and systems of the robustness and permanence appropriate for a civic structure, they have deteriorated. Additionally, a comprehensive renovation of the existing facility should include a scope of work of a severity that will require the completed renovation to comply with the Florida Building Code Standards for new construction. The condition and type of construction of the additions contribute to the impracticality of their comprehensive upgrade. If not for the cultural value of the historic City Hall structure encased within the current form, it could be argued that the entire facility would be replaced. Removal of the previous additions will better allow for the appropriate and justified preservation of the original construction, and can address much needed termite damage remediation.

It has been the sentiment of the citizenry as well as the FBCC and elected officials that City Hall remain downtown as a focal point for public activity and a magnet for local business.  Combining square footage of the propoosed annex and the renovated City Hall would produce the space needed according to the Silling Study.

During the September 21, 2021 workshop, Commissioners asked that the architects be awarded a small contract to return with conceptual drawings of options. 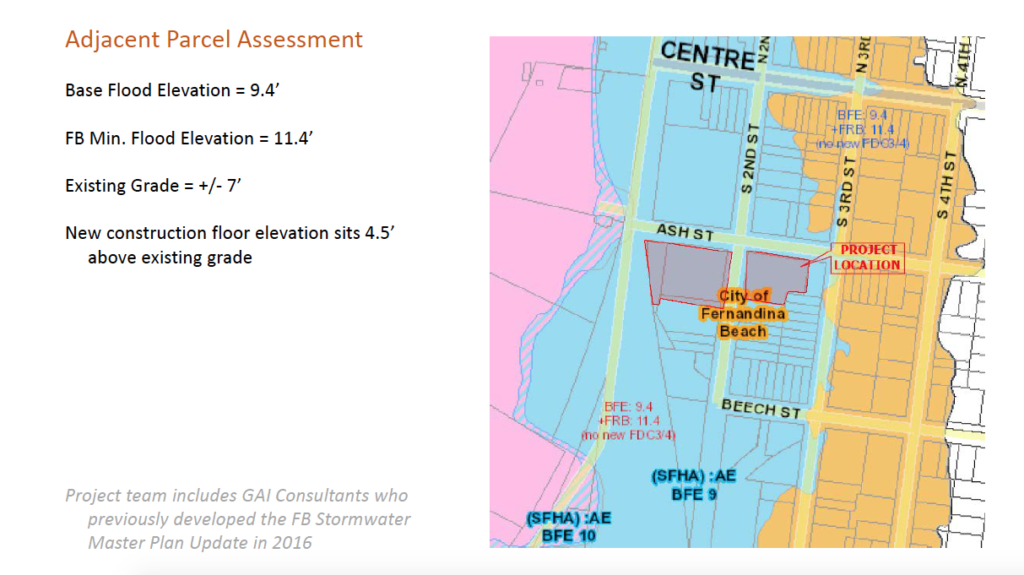 Silling proposed building an 18,000 square foot annex on the City-owned parcel at the southwest corner of 2nd and Ash Streets.  This building would primarily house the Building, Planning and Code Enforcement activities of the City.  With the completion and occupancy of this annex, the City would then turn its attention to the existing City Hall Building, following a decision to restore or rehabilitate the structure. 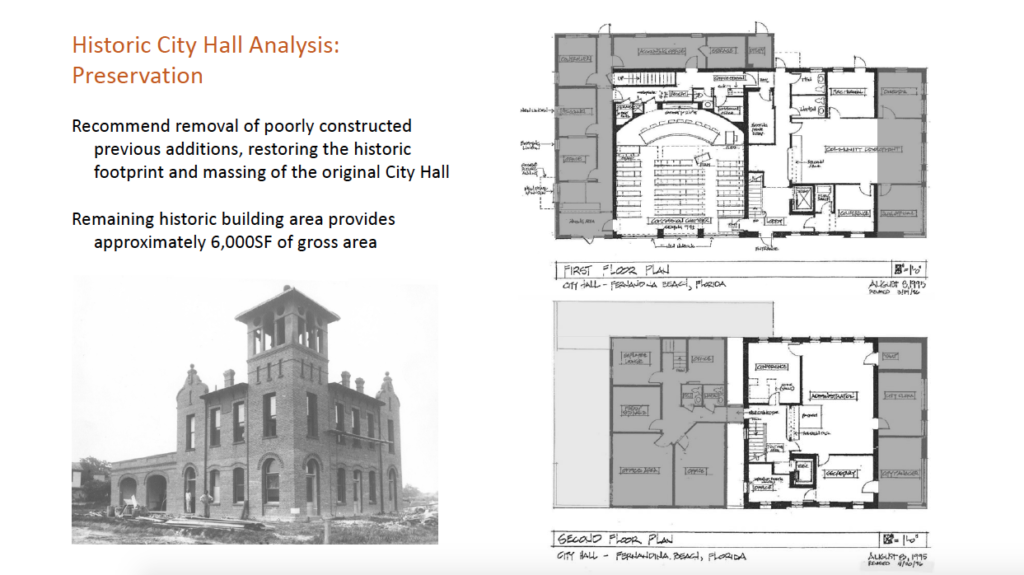 During the September 21, 2021 workshop, Commissioners asked that the architects be awarded a small contract to return with conceptual drawings of options.

City Engineer Charlie George followed up the Silling Report with an analysis dated August 2, 2021 identifying actions and cost estimates required to bring the current City Hall into compliance with code requirements to safeguard City employees and visitors.  The total cost of these improvements is an estimated $2.8M.  These costs include securing the outer envelope of the building (repairing or replacing the roof, stucco, canopies and windows); installing a sprinkler system and firewalls; repairing/replacing electrical, communications and HVAC systems;  renovating/revising stairwells and door systems; demolishing the failing additions.

The building is also allegedly riddled with termite damage.

Note that George’s estimate does not factor in a historically accurate renovation of City Hall, or the cost to build an annex.

So how much money are we talking?

Silling Architects estimates that the cost to build a City Hall Annex on the proposed site would be about $6M.  When factoring in site development, interior finishing, etc., the total budget for Phase 1 is estimated as just below $9M.  The estimated budget for Phase 2 (rehabilitating/restoring the existing City Hall is just shy of $4M.

It should be noted that while site preparation is a cost, the City already owns the land proposed for the Annex.  A recent appraisal valued the parcel at the southwest corner of Ash and 2nd Street at $1,040,000.

What about the idea of moving City Hall into the mostly vacant Historic Post Office Building?

After years of lobbying, entreating and attempted negotiations, the City backed off this idea.  Despite pressure from former Senator Bill Nelson and U.S. Representative John Rutherford, the Postal Administration was not amenable to donating the building to the City or offering it to the City for a reasonable cost.  At times, they took it off the market completely.  In comparing its space needs to available space in the Post Office Building and adding in the costs to modernize the building to meet modern code and ADA requirements, the City decided not to continue pursuing this option.

Where is the FBCC on the issue?

During their workshop, Commissioners appeared to agree that life safety issues with the current City Hall need to be addressed soon.  However, there was no agreement on the need for a new building or annex.  They will await further reports from Silling and the City before committing to a more expansive course of action.

It must be emphasized that neither the FBCC nor the City Manager has endorsed any plan at the current time.  If you have ideas or comments to help in making the decision on meeting space needs, contact a Commissioner or the City Manager.

It should be noted that the City is looking at all its facilities to identify building needs.  It is likely that the Atlantic Avenue Recreation Center, which is tilting 8 inches, will also be in need of work.