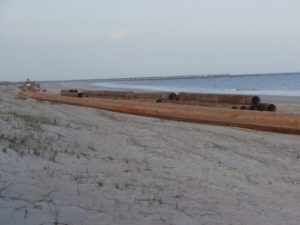 JACKSONVILLE, Fla. – Nassau County residents and visitors will begin seeing construction equipment and dredging pipes on Fernandina Beach around the first week of January in preparation for the next scheduled maintenance dredging of U.S. Naval Station Kings Bay and sand placement at Fernandina Beach which will get underway in mid-February.

The beach will remain open to residents and visitors outside the work areas. The contractor expects to close about 1,000 feet of the beach at a time during the renourishment project. Outside of the active fill area, public access over the dredging pipes will occur every 200 to 400 feet. Swimmers and surfers are strongly encouraged to avoid the construction area to avoid injury.

The Corps asks the public to use caution around construction areas and to be patient with temporary construction noise as the project progresses. Residents living close to the beach and near the active construction will likely hear heavy equipment and backup alarms.

The U.S. Army Corps of Engineers, Jacksonville District awarded a $32,859,630.00 contract to the Dutra Group for the maintenance dredging of U.S. Naval Station Kings Bay and sand placement at Fernandina Beach. Sand will be placed on critically eroded portions of Fernandina Beach in areas not routinely renourished. Using sand dredged from the Kings Bay Entrance Channel on Fernandina Beach will result in an overall cost savings of approximately $13.5 million.

Sponsored by the Naval Submarine Base Kings Bay and the City of Fernandina Beach, the project is critical to commercial cargo transiting the port and also to the Navy base, which shares the entrance channel.  Fernandina Beach, Nassau County, and the Florida Department of Environmental Protection contributed $1.6 million to the project allowing sand placement in critical areas on the beach.

The project includes maintenance dredging of the entrance channel and parts of the inner channel, returning the project to its authorized depths.  It also includes escarpment removal at Fort Clinch State Park and beneficial placement of beach compatible sand in the northern portion of Fernandina Beach in Nassau County. Regionally managing sediment results in significant cost savings and environmental benefits.

Construction is expected to begin in December and will last for approximately three months. Dredging will end before March 31, which is the end of the environmental turtle window allowing hopper dredging.

Project updates will be available at www.saj.usace.army.mil and our social media pages – facebook.com/JacksonvilleDistrict and twitter.com/JaxStrong.