Mayor Mike Lednovich devoted about 20 minutes of discussion time at the January 19, 2021 Regular Meeting of the Fernandina Beach City Commission (FBCC) Regular Meeting to his critique of the construction and roll out of Toptracer at the Municipal Golf Course.  The FBCC last year voted to install Toptracer at the City’s golf course to attract more people to the game of golf and to increase course revenues to offset the need for operating subsidies from the City’s General Fund.

Citing the failure to provide water connections to the Toptracer facility as a major construction planning error, Lednovich said that Toptracer patrons will need to travel to and from the club house to use restrooms and that food and beverage service will need to be provided via golf cart from the club house, a distance he claimed was more than two football fields in length.

[The absence of restrooms and onsite food service had been proposed from the beginning and supported by the FBCC.  Inasmuch as the City was proposing a new project to increase revenue and reduce debt, the FBCC decided almost a year ago to construct a facility that would be served by the clubhouse.  Current estimates to add restrooms and a basic food preparation area are around $200,000.  IGP proceeded under City direction.]

Lednovich claimed that other Toptracer sites draw 65 percent of their revenue from food and beverage service.  Despite service available from the clubhouse, he believes that the absence of a food service window will result in failure to capture significant revenue.

Lednovich also delivered sharp criticism to Indigo Golf Partners (IGP) — formerly, Billy Casper Golf — for what he saw as a failure to market and promote Toptracer in advance of its opening to the public to generate what he termed as “sizzle.”  He specifically noted the lack of signage and promotional material and what he termed as a failure of IGP to meet with local hoteliers to create an atmosphere of excitement and anticipation for the new electronic golf game.

He cited incomplete or non existent information promoting and explaining Toptracer on both the City website and Facebook.  He questioned the logo, which does not mention Fernandina Beach.

Lednovich presented a series of solutions to the issues he had identified:

After 20 minutes, Lednovich asked for comments from other Commissioners.

[IGP agreed to a 2 month contract extension following the expiration of their current contract in December.]

Vice Mayor Len Kreger agreed that Lednovich had identified problems that needed solutions, whether operational or not.  “But it all comes down to guess what?  MONEY,” he said.

Commissioner David Sturges asked, “Who dropped the ball?  Why are there no restrooms or service kitchen?”  As a newly elected commissioner he acknowledged that he had not been involved earlier, but that he anticipated much further discussion at the January 27 FBCC planning workshop.

Newly elected Commissioner Bradley Bean agreed that the FBCC needed to decide on future management of the golf course and looked forward to more discussion at the planning workshop.

IGP representatives Dan Zimmer and David Evangelista delivered a detailed presentation to the FBCC on marketing efforts to highlight what the company has done to date and what it plans in advance of Toptracer’s soft opening and the grand opening.

Zimmer explained that the food and beverage service would be handled within the Toptracer bays so that players would not need to leave the game to place and receive their orders.  He agreed that IGP had missed an opportunity to place signs, but that they are rectifying that.

In responding to Lednovich’s criticisms, IGP representative David Evangelista noted that until the Toptracer game has been installed and calibrated, they believed that expending marketing funds would be premature.  The Covid pandemic has affected construction schedules around the country, leading many projects to postpone opening dates.  The postponements often cause otherwise interested players to lose interest and go elsewhere.  They agreed on the benefits of a Grand Opening for Toptracer, once the system is installed and calibrated following a soft opening.

Via a series of slides, Evangelista provided detail on marketing plans. 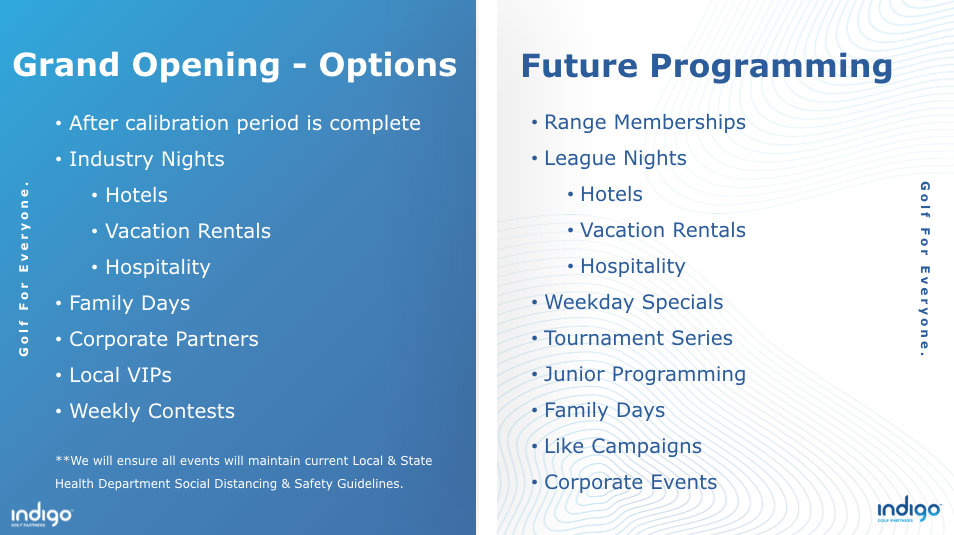 “With all the back work we have done, we are ready to flood the market [with advertising],” Evangelista said.  “We can be nimble based on what’s happening in our market.”  While definitely supporting a grand opening, he said that Covid is still a factor in planning large gatherings.  With all the events on tap, Evangelista said that IGP wants to make sure that it is still following the CDC guidelines for large gatherings and social distancing.

“We are ready to go,” Evangelista said, “but we just want to have a good comfort level on when that opening date will be so we can get good information out to our potential clients.”

Lednovich continued to voice concerns over the logo and local outreach efforts.