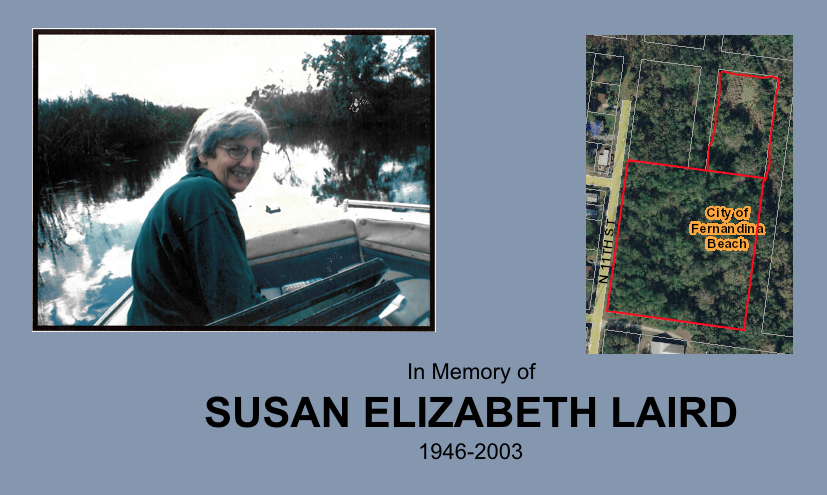 The land conservation efforts of the City of Fernandina Beach received a boost this week with a private donation of $50,000 from the Susan Laird Trust to assist in the purchase of two parcels of land on North 11th Street.  At the October 15, 2019 Regular Meeting of the Fernandina Beach City Commission (FBCC), Teresa Prince of Tomassetti & Prince representing the Susan Laird Trust formally presented the check to Marc Hudson and Megan Mangiaracino of the North Florida Land Trust to assist with the City’s purchase of conservation property.  Mayor John Miller represented the City during the presentation.

Prior to presenting the check, Prince presented a brief biography of the late Susan Laird and her work on land conservation in the City of Fernandina Beach.  Laird, known to her acquaintances as “The Mother of the Greenway,” passed away in 2003 at the age of 56.  She worked for the city from May 2001 to January 2002, when she was diagnosed with cancer.

Vicky Wolfinger Winslow, the trust administrator, served as the City’s Grants Administrator during Laird’s tenure.  The two women worked together to secure grants for the Greenway and to craft a $6M bond referendum which voters approved to purchase the land that became the Greenway.  The campaign was called “Save Our Open Spaces.” During the process, Laird took many city residents on tours through the lands identified for purchase and spoke to neighboring residents and property owners about the benefits of establishing a public greenway.

Laird also worked on the mitigation site for the FDOT Project to repair the gates on Egans Creek along Atlantic Avenue and the restoration of the salt marsh.  “She worked tirelessly to keep Fernandina Beach and Nassau County healthy and accessible to all,” Prince said. “She was also instrumental in the construction of North Beach and Seaside Parks.”

Vicki Winslow, as trust administrator, decided to make the trust’s final major donation to acquire additional land for conservation.  But because the money had to be donated to a non-profit, it could not go directly to the city.  The North Florida Land Trust agreed to accept the donation toward the purchase of conservation properties that they had been working with the city to acquire.

Prince presented the check to Marc Hudson and Megan Mangiaracino of the North Florida Land Trust to aid in the purchase of the property on North 11th Street.  The closing on that property is anticipated within the next month.

In accepting the check Marc Hudson said, “It’s an incredibly powerful thing that someone who worked so hard on parks during her lifetime is still able to contribute to that effort.  This is the first major contribution to this effort, but others are coming in.”  Hudson added that the official fundraising campaign will kick off in November.

Mayor Miller thanked Teresa Prince for the major role she played in bringing this gift to the city.

Later in the meeting City Attorney Tammi Bach indicated that the city’s acquisition of the two parcels on North 11th Street and one on Citrona will be finalized.

Prior to her work with the city, Susan Laird had been employed as a reporter with the Fernandina Beach News Leader.  In addition to her work with the Sierra Club on environmental issues, she also coordinated activities of “Islanders for One Amelia,” the political action committee formed to promote annexation of non-city island properties into the city of Fernandina Beach in the late 1990’s.  Although the referendum passed unanimously in the city, it failed among voters in the unincorporated portion of Amelia Island.