Following public outcry against his proposal to convert the Amelia River Golf Course into a car centric complex, Signature Land Company developer Steve Leggett and his team went back to the drawing board.  Leggett and his team have met one-on-one with dozens of people throughout the community to take input and address concerns.  The result is a slimmed down proposal for the Amelia River Car Club, only 40 percent the size of the original proposal. 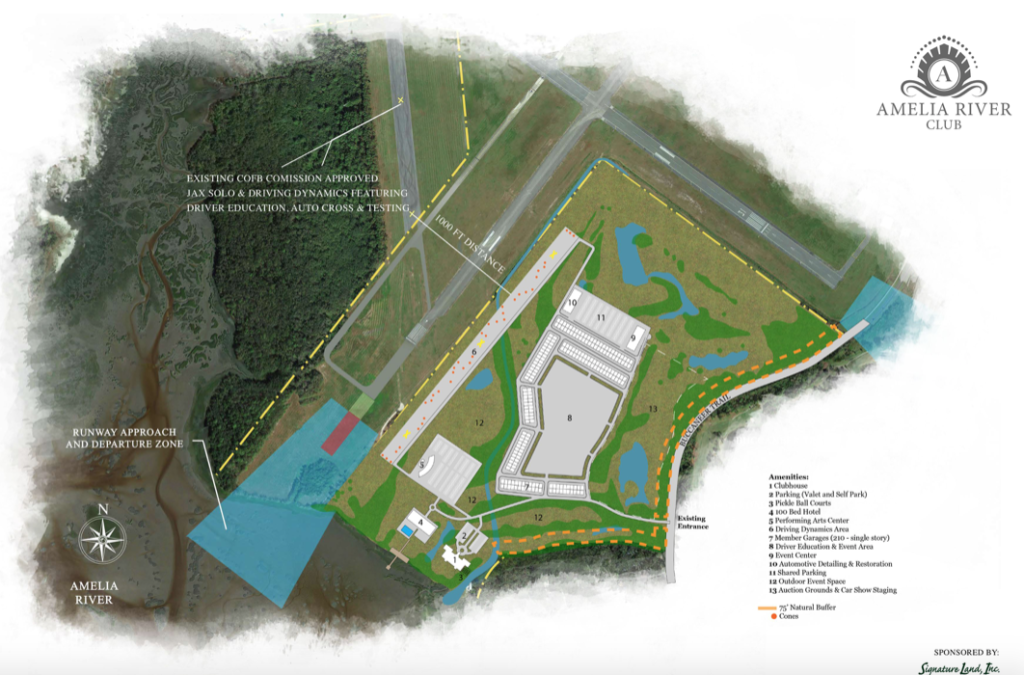 The site will feature large green spaces – about 70 percent of the 175-acre facility.

Gone are the driving track and the family entertainment center, including the go-kart track. The hotel has been redrawn as a 100-room boutique hotel, with a smaller swimming pool.  The additional entrances to the property have been eliminated.  There are no proposed changes for the landscaping along Buccaneer Trail.

The centerpiece of the development will be 210 single-story club member garages, which will provide car enthusiasts a place to store and admire their special vehicles.  A showcase area will allow manufacturers to display their cars and host driver education events.  A member clubhouse will also be part of the project.

As in the initial proposal, there will be no residentiial units on the property.

Because the project will replace the existing golf course, there will be no need for tree clearing.  Large areas of the property will remain conservation lands, and there will probably be more trees planted to some areas.  “We are leaving some areas open,” Leggett said, “as event space, room for auctions, and parking space for car trailers bringing vehicles to the Concours d’Elegance.”

Steve Leggett said, “We listened to all the comments.  What we heard was that what we were proposing initially was too much for the community to bear.  In our desire to provide amenities for the community, we loaded the project with too many features.  But we don’t want the community to change, so we scaled back our plans to concentrate on building an ultra luxury, high end club where car enthusiasts can house and enjoy their cars.”

Leggett emphasized that the only “driving range” on the property will be one to accommodate Driving Dynamics.  That activity currently takes place on a runway at the City Airport.  Via public records request to the City, Leggett determined that there have been no related noise complaints filed during the past 5 years.

The cost for the slimmed down project has dropped to $85M from the original $125M.  There will be 150 jobs created under the new plan.  The City and the County will receive increased ad valorem tax revenues; the airport will receive more rental income.  There will also be more money spent in the Amelia Island community by club members and event attendees.

Retained from the original plan is a car detailing/repair shop.  The developers hope to attract local youths who might be considering a career in repairing and maintaining high end cars to work with them in this facility.

An area designated for pickleball courts has been added.

In order to keep the public accurately informed on what the developers propose for the site, a website.has been created.  People are encouraged to use a form available on the website to ask questions and clear up misconceptions.

One of the key supporters of this project is Bill Warner, Founder and Chairman of the Amelia Island Concours d’Elegance Foundation.  In a letter to the Fernandina Beach Mayor and Commissioners dated August 12, 2019, Warner explained that space and logistical needs for the annual car festival have grown over the years.  He wrote, “Sponsors and manufacturers are the lifeblood of event experiences like [the concours] and they require significant space to showcase their innovative vehicles in a safe and friendly environment. … In order for the concours to survive, we will need to accommodate the needs of the sponsors such as Mercedes-Benz, Porsche, General Motors, Jaguar, Land Rover. Infiniti, Lexus and a host of others, we will require this type of development.  Otherwise we will have to evaluate other proposals from communities [that] would welcome the concours with assets that would allow us to meet the requirements of the future.”

Warner continued, “This facility will undoubtedly be a jewel in our community’s crown and create a place where car enthusiasts from around the world can come and enjoy their shared passion — all while respecting our local residents and natural charm.  The activities taking place at [this development] would be similar to those that are already a regular occurrence at the Fernandina Beach Municipal Airport—like the Jax Solo event [that took place in August].”

The proposed development’s website will be updated as more information becomes available.  A notable statement on the site:

“There will be absolutely no vehicle racing at the Amelia River Club. Period. Any claims to the contrary are false and misleading.”