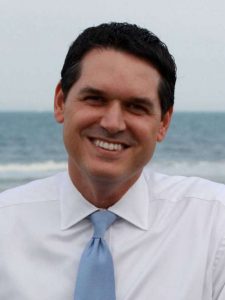 Florida State Representative Cord Byrd (R-District 11) has filed House Bill 3995 for consideration during the current Florida Legislative Session, which began this week. If approved by the Legislature and the Governor, this bill would provide $970,000 to fund the Fernandina Beach Stormwater Shoreline Stabilization. This is a multi-year project.   The current request for funding covers only the first 267 feet of seawall. The entire seawall would eventually stretch 1,000 feet along the Amelia Riverfront. [See: https://fernandinaobserver.com/uncategorized/vice-mayor-len-kreger-shore-stabilization-must-precede-waterfront-park-plans/]

The appropriation request states that the funds would be used for design engineering for the complete project construction. The City would match this amount.   The City of Fernandina Beach City Commission via Resolution 2017-160 dated October 17, 2017 has supported the Project.   The need for the project has been documented in a Vulnerability Study by NOAA, Northeast Florida Regional Planning Council and the Fl. Dept. of Economic Development.

The new seawall, a steel sheet pile design, has been engineered to correct the piping of fill material under the seawall and will have a cap elevation 3-4 foot above the existing seawall. The storm water discharge infrastructure servicing the upland area of the project will be upgraded to include storm water check valves to prevent seawater from overtaking the stormwater management systems.

The coastal flooding caused by the decaying seawall and overwhelmed storm water systems create challenges to public health including, but not limited to, stormwater overtaking of stormwater management infrastructure causing upland pollutants to enter the environment, lingering storm water creating a medium for dangerous mold growth and resulting human illness and mosquito borne illness. A fully functional seawall and correlating, effective stormwater management system increases water quality in the Atlantic Ocean, Amelia River, and the Ft. Clinch Aquatic Preserve, all of which are designated as Outstanding Florida Waters.

In addition to assisting the management of stormwater to protect both marine health and public health, the request cites the importance of this project to enhancing the cultural experience for residents and visitors. The City of Fernandina Beach is home to a significant National Historic District that is an anchor to the local historic and ecotourism economy. The City Marina seawall is intended to protect the upland areas from flooding and to protect the pristine waters of the Amelia River from upland pollutants during flood tides and storms.

Transportation infrastructure is particularly vulnerable to rising storm water as areas of Front Street and the railroad tracks bear the brunt of seawater intrusion during high tides and storm surges, as they may remain flooded for days after an event. The repetitive flooding of Front Street and the inundation by storm water of the only rail service to the Port of Fernandina and West Rock industrial complex is of great economic concern.

While the Federal government has made additional funds available for shoreline protection following Hurricane Irma, there is no certainty that this project or any other local stormwater mitigation projects will be funded. The Bill is currently under consideration in the Agriculture & Natural Resources Appropriations Subcommittee. To track this bill through the legislative process, you may visit Representative Byrd’s website: https://www.myfloridahouse.gov/Sections/Representatives/details.aspx?MemberId=4632&LegislativeTermId=87

The funds would not become available until July 1, 2018, if approved.