Rarely do citizens get to see in a dramatic fashion the explanation of why the city purchases various pieces of equipment. This week proved the exception.

The Fernandina Beach City Commission (FBCC) routinely approves purchases of safety equipment for the Fernandina Beach Fire Rescue Department without much discussion. But at the December 19, 2017 Regular Meeting of the FBCC, newly elected Commissioner Chip Ross called out for discussion the purchase of a cardiac monitoring device (LIFEPAK) and automatic chest compression system (LUCAS) from Physio-Control, Inc. The total cost of the Lifepak (cardiac monitoring device) and Lucas (automatic chest compression system) is $62,754.91.

Ross, who also happens to be an Emergency Room physician at Baptist Nassau Hospital, asked Fire Chief Ty Silcox to explain how these devices help patients.

Following Silcox’s presentation, Mayor John Miller said, “Something tells me that this will not be the headline in tomorrow’s paper, but it should be. It really is important, and that is why a lot of people live in this community with its fast response time. It goes back to what we’ve said before: public safety is number one.”

Commissioner Ross said, “I’d just like to give a commercial for the local EMT squads and the local hospital. What matters when someone is having a heart attack is how quickly you can get that person into a Cath Lab [catheterization laboratory], and the closest Cath Lab we have is in Jacksonville. Our [local] hospital and EMT squad are in the top 5 percent in the country for getting people from the time they call 911 to the Cath Lab. They do an amazing job.”

The audience applauded Chief Silcox and his staff. The FBCC unanimously approved the purchase. Little did they know just how quickly the city would get a real life demonstration of the equipment’s value.

“On Tuesday night’s agenda was an item for the Fire Department relating the purchase of an additional “LUCAS” automatic chest compression device. While there was some discussion of the importance of that device, it really doesn’t truly hit home until there is an event that can solidify the need for such a device.

“Yesterday just after 5:00pm a Cardiac Red call went out in the parking lot of Jade’s Bistro on Sadler Road. A 91-year old man had collapsed just as he had gotten into his car. Deputy Quick from NCSO and I were the first on the scene. Upon removing him from his car, we could not detect a pulse and Deputy Quick deployed an AED. The AED could not detect a pulse and Deputy Quick started chest compressions. About thirty seconds into the compressions, Fernandina Fire/Rescue arrived and took over the care of the subject.

“One fire fighter continued chest compressions until others could deploy an automatic chest compression device. FBFD personnel worked on the subject and transported him to the hospital. While I have no idea of his current status, as of last night he was improving and being transferred to Shands.

“I like to think Deputy Quick’s thirty seconds of compressions contributed to improving the subject’s chances of survival, with the FBFD coming in and making his survival a reality.

“However, the long-term success is a well-trained Fire/Rescue Department with the support of a Commission that provides funding for personnel and up to date equipment.

“In the attached photo, you can see members of the FBFD working to save the subject’s life. You can also see an automatic chest compression device (green in color) attached to the subject. 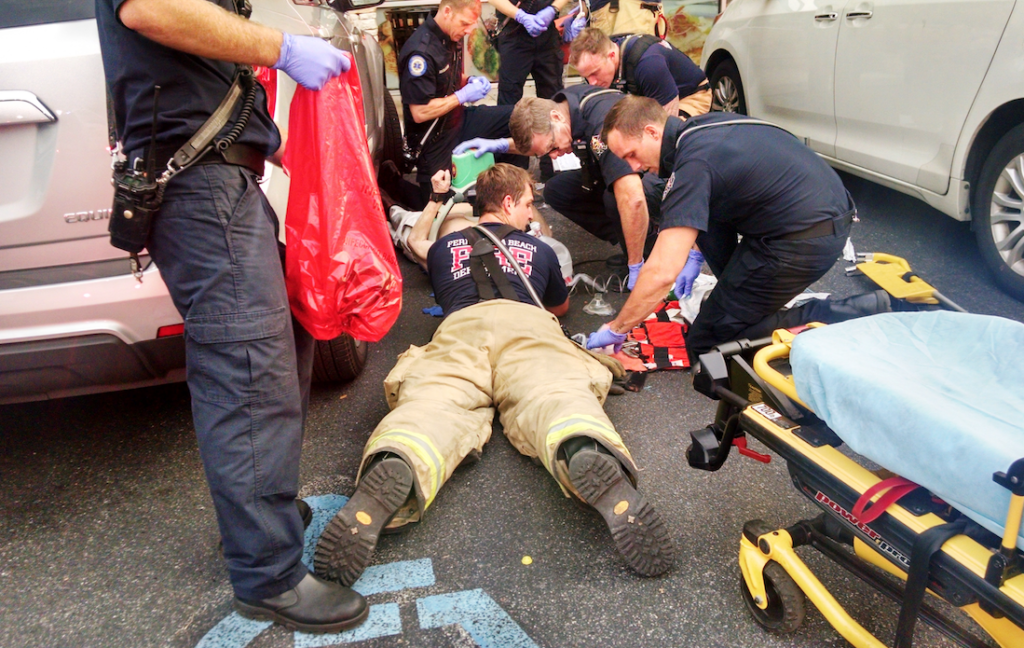 “The Mayor said it in the meeting, people live in Fernandina Beach because of the high level of services, this is a perfect example of that statement, KUDOS to FBFD.”