During their October 20, 2020 Regular Meeting, the Fernandina Beach City Commission (FBCC) conducted quasi judicial hearings with respect to the following voluntary annexation requests. All three properties executed voluntary annexation agreements in order to connect to City water and sewer. The FBCC will be asked to formalize the annexations at a future meeting. 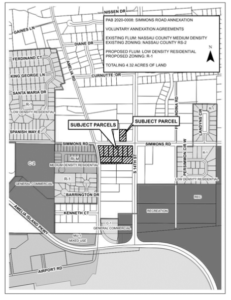 The City of Fernandina Beach requested annexation of eleven parcels of land located between Amelia Road and South 14th Street and along Simmons Road. These parcels became contiguous to the municipal limits in 2016 when the Aspire Phase II, Lakeside Reserve subdivision property was annexed into the City. Resolution 2014-154 approved extension of water services outside of the corporate limits of the City. This extension provided water to the nine-lot Plantation Hammock subdivision on the south side of Simmons Road. Resolution 2018-182 approved extension of water services to the property located at 847 Simmons Road, lot 6 of the Glyndon Estates subdivision. 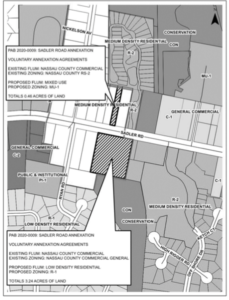 The property owners of 2233 Sadler Road requested voluntary annexation in June of 2020 to connect to City Sewer after their septic and drain field failed. The single-family residence was built in 1987 with access to City water. Assignment of the Mixed Use (MU) Future Land Use Map (FLUM) category and Mixed Use (MU-1) Zoning District is requested for 2233 Sadler Road. This designation will eliminate the current discrepancies in the County’s FLUM and zoning designation. The Mixed Use land use and zoning will allow for a combination of residential, office, and limited neighborhood commercial uses which are represented in the current range of uses along this corridor and what the City anticipates in redevelopment scenarios. Single-family dwellings, such as the current structure on the property are a permissible use in the Mixed-Use FLUM designation and MU-1 Zoning District. 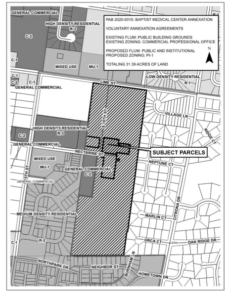 The City of Fernandina Beach requested annexation of four parcels of land associated with the Baptist Medical Center of Nassau on South 18th Street. Resolution 2013-186 approved extension of water and sewer services outside of the corporate limits of the City and allowed for an expansion of the hospital campus. Assignment of the Public and Institutional (PI) Future Land Use Map (FLUM) category and Public and Institutional (PI-1) zoning district is requested for the subject properties. This requested FLUM designation and zoning district are the only land use and zoning categories that allow for hospitals. Following the 2013 petition for water and sewer services and voluntary annexation, the City adopted ordinance 2014-21 which amended the Supplemental Standards Chapter of the Land Development Code (LDC) to accommodate the 60 foot maximum building height and off-site signage requirements in anticipation of annexation. Those LDC amendments eliminated what would have made the hospital a nonconforming structure upon annexation.