The PEG Channel (Comcast channel 264) is operated by the City of Fernandina Beach and serves Nassau Counties Public, Educational, and Government needs.  The purpose is allocated by Comcast Corporation per the City’s Franchise Agreement. The goal of the PEG Channel is to provide a means and opportunity for citizens to become informed about City, County and school services, events, regulations, and also decisions being made by their representatives, both elected and appointed.

The FBCC recently resurrected the dormant PEG Committee PEG Channel Committee whose objective is to serve and engage the community by providing educational, informational, entertainment and public service content.   The Committee has 5 full members appointed by the FBCC and an honorary memberr, former Vice Mayor Patricia Thompson.  Mary Hamburg serves as staff liaison.

Owenby reported that the Committee has met every goal set for the first quarter.  Those goals included filling all the Board positions, meeting consistently each month to set in place an administrative structure, and adding former Vice Mayor Patricia Thompson as Honorary Member to provide background on the community and operation of the earlier PEG Committee. 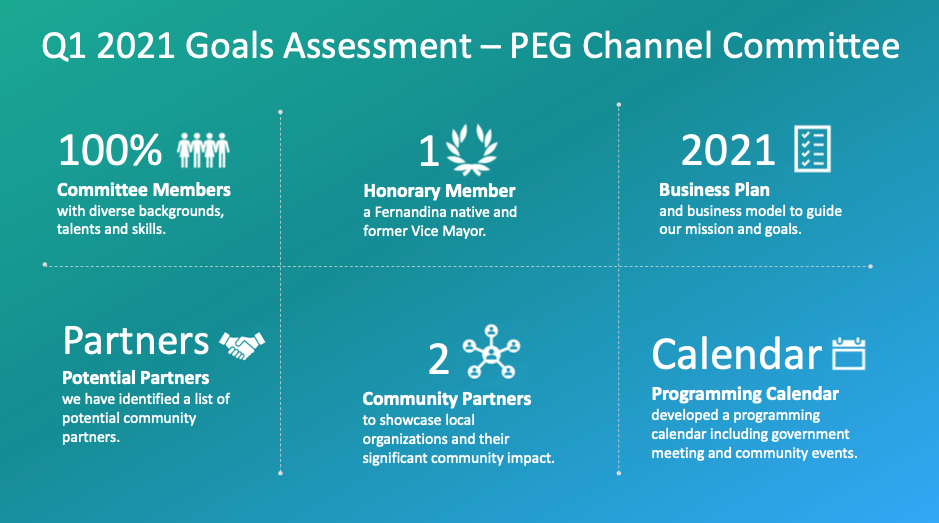 The first priority of the Committee was to bring about community partnerships.  They identified about a dozen potential partners and brought on board two the first quarter who pledged their support to the Committee to provide services and subsidize costs for items such as closed captioning which is required for the broadcast channel.  They also developed a program calendar to reflect City and community happenings for the months ahead while beginning to air some content on the PEG Channel.

Owenby said that the PEG Committee will be expanding upon these goals and activities in the next quarter.

Owenby presented a new logo and branding for Fernandina Television.  He expressed confidence that such branding will help the PEG activities grow.  As part of their support for the community, the PEG Committee has also announced a scholarship program.  In tandem with the Nassau County School Board they hope to offer a contest for students to present examples of their media work on the topic:  “What Makes Fernandina Special?”  Owenby expressed the Committee’s enthusiasm for this project which they hope will help unify the town and celebrate its history and culture, as well as its environmental beauty.   He said that 30 percent of the scholarship goal has already been funded. 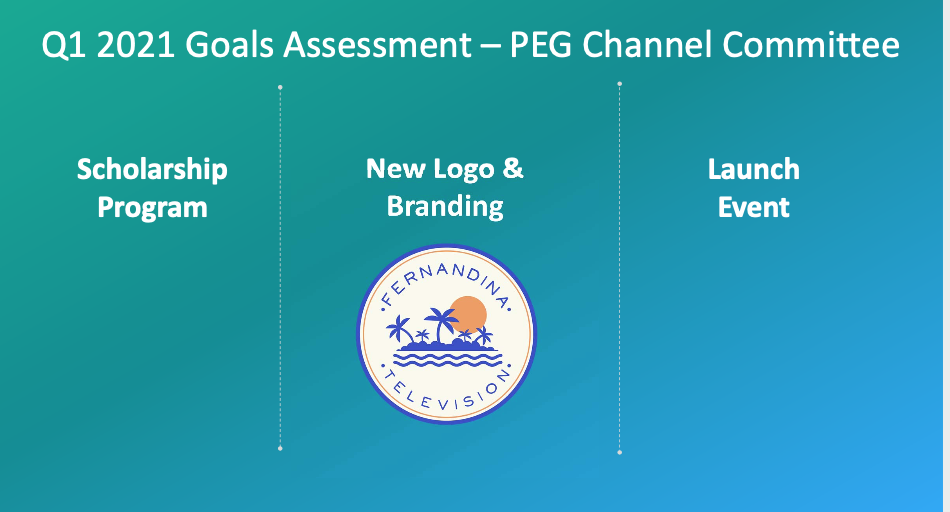 Vice Mayor Len Kreger complimented the PEG Committee on its work, indicating that his priority is to see more public content, especially regarding activities of the City.  “Social media has become crazy,” Kreger said, “and [PEG] is an opportunity to get actual facts out to the public.”

For additional information about the PEG Committee and its activities, visit the City website, where contact information for members, meeting schedules and minutes may be found.