Since the beginning of time it seems, citizens and City decision makers have identified the downtown waterfront in Fernandina Beach as a problem.  Consultants have come and gone; the public has weighed in formally through charettes and public meetings and informally in talks with individual commissioners.  Plans over the years have been proposed, modified and adopted only to languish in the City archives.   A succession of City Commissions adopted plans which they then abandoned either for reasons of cost or lack of conviction.

Earlier this year the Fernandina Beach City Commission (FBCC) appeared to have adopted another plan as a conceptual basis for moving forward.  The plan — known as Concept E — was put together by the landscape architectural firm of Marquis Latimer + Halbeck following many weeks of input and comment from city leaders and City staff.  As a final step in information gathering, last fall the consultants made the architectural renderings available to the public via online discussion and a survey.  The availability of this survey was widely promoted by the city, social media and news media.

At a workshop on November 16, 2021 Fernandina Beach City Commissioners once again turned to a discussion of developing questions for a waterfront survey to discover what the public wants or doesn’t want to see in the City-owned parcels that have been targeted for a waterfront park.  Key areas for the discussion were parking, commercial activity and a performance pavilion.

Mayor Mike Lednovich appeared to be the strongest proponent for a survey, having drafted a 3-page survey instrument consisting of 27 questions along with an additional page of questions proposed by the public.

A simpler survey had also been drafted by City staff to help Commissioners begin discussing what questions they wanted to pose to City residents.  City Manager Dale Martin stressed that this was not intended to be a final survey instrument, just a starting point.

The upshot:  Following spirited discussion, Commissioners agreed to place approval of the Concept E plan on the December 7 FBCC meeting agenda and delay a decision on the survey until an up or down vote is taken on the conceptual plan

Vice Mayor Len Kreger said that following the City’s decision not to pursue obtaining the O’Steen Simmons property via eminent domain, the entire plan needed to be revisited.  He said, “I’m beginning to feel that we have not thought out [the ramifications] of separating the resiliency plans from the park plans.  We may want to do that all together.”  He questioned how some of the items like ponds made it on to Lednovich’s draft.  “I don’t have an agenda on what’s there, personally,” he said.

Commissioner Bradley Bean supported convening a 2-4 hour session to determine what the FBCC and the public want to see in a waterfront park.  “But I remember a workshop in February dedicated to the waterfront park.  We have already had a survey on waterfront development, and the Concept E Plan before us included that. … In my mind, this is still a great plan and we should work toward implementing it.  I don’t think we need to do any more talk; we need action.  I would like to approve this plan as a concept.  It’s a great plan and has many of the things the public is looking for on the waterfront.  At the end of the day. our public is looking for a great place to go to watch sunsets.  So I ask my fellow Commissioners:  are you willing to move forward on this plan, because I sure am.”

Commissioner Chip Ross said, ‘We’ve had 20-30 years of charettes, surveys, concept plans.  We had an extensive survey that came up with [the current concept].  And I don’t think we need another survey.”  He went on to say that both the river and the railroad tracks constitute fixed boundaries on the east and west.  Parking and Front Street will take up another portion of the land.  “Until we decide how much of this area will be used for parking, we cannot move forward with anything else within the envelope of proposed park development.”  He recommended “adopting the current Concept E with the caveat that we are willing to accept a little less parking on the west side of the railroad tracks.”

Commissioner David Sturges agreed with Bean and Ross, expressing his strong support for boat trailer parking.  “We’ve already hashed this plan over many times,” Sturges said, “and we all thought it was a great concept.  As long as we can get close to having the same amount of parking.  We will lose some spaces, but how many?  As far as I’m concerned that is the biggest worry for the public.”

City Manager Dale Martin presented the FBCC with a study done in 2019 that reported that the City has 1,233 parking spaces in the downtown area between Calhoun and Cedar Streets and from 8th Street west to the railroad.  “I’ll be the one to take one for the Team here:  I would like to go on record saying there is not a parking problem downtown.  We host dozens of events all year long that ironically close most of our parking.  We bring hundreds or thousands of people to these events, which are successful.”  He went on to say, “But when Uncle Joe and Aunt Martha can’t find a parking space in front of Peppers at 2 p.m. on a Wednesday afternoon, suddenly there is a parking problem.  There is not a parking problem.”

Martin presented the information from the 2019 study to back up his assertion. 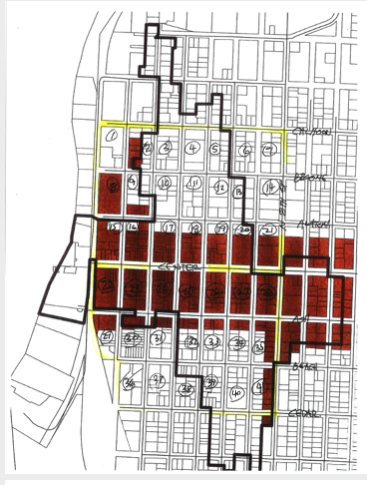 “Both the CRA Plan of 2005 and the 2015 Parks and Rec Master Plan indicated that parking should be eliminated from the waterfront.  It shouldn’t all be eliminated, but we shouldn’t let parking drive the waterfront development plan.  As long as we have a boat ramp, we need to have some level of parking for boat trailers,” Martin said.  He added that City Engineer Charlie George has determined that there needs to be a loading zone for marina fuel tanks and restaurants such as the Salty Pelican and the Marina.  A loading zone could take 6-8 parking spots.

“I think that we all want to keep as much parking as possible, but we also want these amenities that are explained or illustrated in Concept E.  But there is not a parking problem downtown.”

Commissioners did not appear to see a need suggested by Kreger to revisit the entire plan in light of the City’s abandoning attempts to acquire the O’Steen-Simmons property via eminent domain. 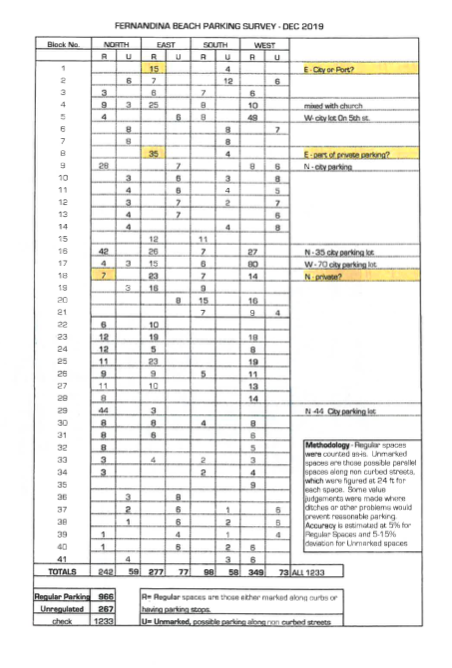 He said that placeholders for buildings and discussions over Atlantic Seafood’s new building had not been refined.  He believed that people needed to be asked if they wanted commercial buildings on the waterfront; if so how big.  He also felt that people needed to weigh in on what they wanted in a performance venue.  He cited the low response to the survey last fall in telling his peers, “You are about to make a very important decision based on comments from 173 people.”

Lednovich expressed his support for another survey and suggested that the Concept E Plan be placed on a future agenda for a vote.

City Manager Martin reminded Commissioners that no matter how they proceed using Concept E as a baseline. “The only things that can come close to happening in the next year are resolving the Atlantic Seafood Building issue and determining the functionality of the performance venue.  Those are the only things realistically that can happen [until infrastructure issues and resiliency are addressed.].  While we haven’t talked about it, we have a grant to demo the existing boathouse.  Everything that is done in the proposed park area needs your approval first.  It isn’t as though we are going to let a contract to suddenly build an amphitheater.  This concept has now been before the FBCC for two years.”

Bean cited plans and frustrations in making decisions about the waterfront going back 100 years.  “Personally I have seen 6 plans go forward and fail.  So let’s go ahead with this one.”

Ross said he is prepared to adopt the Concept E plan as a concept.  “We are going ahead with a walkway right now,” he said.  “We are re-engineering Ash and Centre Streets [to accommodate railroad safety measures.]  Once those things are constructed and we move on to Alachua Street and a design for the rest of the seawall we can figure out parking and then tweak the rest of this park plan.  We need to concentrate on the infrastructure so we can move forward and not have one more plan that fails.”

Ross agreed with Bean that it is time to move on.  He expressed doubts that a new survey would be useful until the “envelope of development” can be determined.  “Concepts can be changed,” he said. He suggested waiting until spring to try to do anything more with the plan.

Lednovich continued to argue for a survey.

The consensus if the FBCC was to place approval of the Concept E Plan on their December  7 agenda.

But wait!  They continued.

Commissioner David Sturges apparently had second thoughts about a survey.  He suggested that if there were only 2-3 issues (parking, commercial activity, performance venue) that the commission wanted input on, a survey could be conducted with results available even after Concept E was approved.

City Manager Martin said that decisions on functionality of waterfront elements needed to be decided before getting into design.

Sturges agreed with that saying that he didn’t want to be in the same discussions a year from now.

Lednovich said that Commissioners appeared to swing from 3-2 against a survey to 3-2 in favor of a limited survey.

Ross said that he wanted to delay a decision on another survey until the FBCC can vote on the Concept E plan.  “We can kick the can down the road for two weeks,” he said.

Bean and Ross continued to hinge their votes for a survey on the outcome of the FBCC vote to adopt the Concept E plan on December 7.

Lednovich directed the City Manager to develop a survey on the three points identified, adding that the FBCC does not need it prior to December 7.

Martin said he would put the survey on the December 7 meeting for a formal vote.

Discussion concluded after 45 minutes of talk.