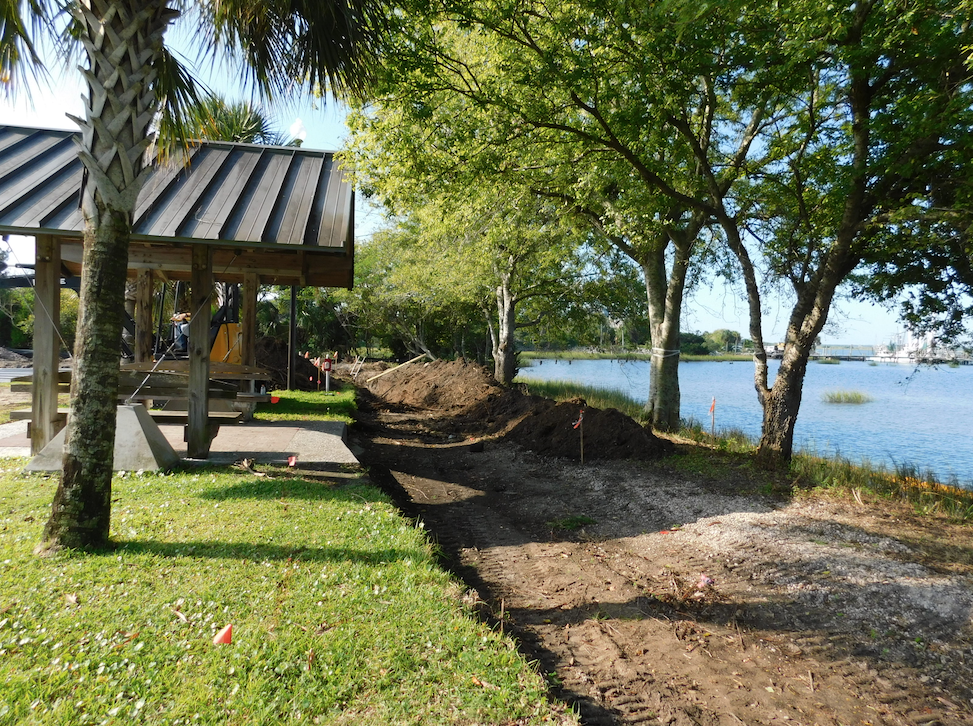 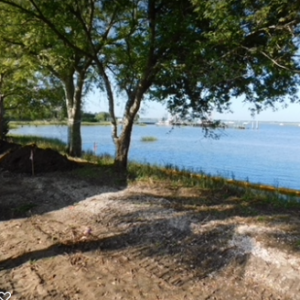 People of Fernandina, take heart.  Work is well underway to construct what promises to be a scenic and resilient walkway along the Amelia River from the southern limit of City property to the boatramp.  The unsightly recycle dumpsters have been relocated outside of what will be park area; brush that blocked the view from the former boardwalk has been cleared, revealing an expansive view of the river.  Crews are hard at work driving in a 20-foot metal barrier wall to prevent scouring of the concrete seawall which is soon to be installed.  Once that has been completed, a new, coquina walkway will be placed between the seawall and the shore.

While the entire first phase of the resiliency project is expected to be completed by mid-spring 2022, the portion of the park containing petanque courts will be prepared and ready in time for the annual petanque competition in November, just a few weeks away. 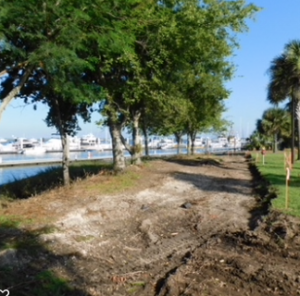 City Engineer Charlie George provided this writer with a tour of the area “behind the curtain” yesterday morning.  [For you conspiracy buffs:  there is no truth to the rumor that the City is installing parking meters behind the curtain].  Sadly, when crews arrived for a week of work Monday morning, they discovered that more vandalism had occurred over the weekend:  a barrier fence ripped up, along with surveying sticks as well as some other damage.  Police patrol the area, but miscreants can easily hide in the forested area to the south when they hear a car approaching at night.

George, who came to the City with 35 years of experience as a Structural/Coastal Consulting engineer along the southeast coast, is excited and positive about moving forward with the resiliency project as well as several other needed improvements.  A native Savannahian, he still has many ties to that area as well as two of his three children still live and work in Savannah.   He welcomes the opportunity to work for the City and with all its departments on the variety of waterfront projects and other capital improvement projects that finally seem to be coalescing for the benefit of the downtown area and the entire city. 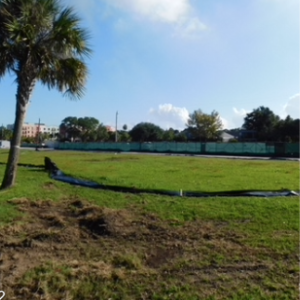 What drew Charlie George to Fernandina Beach?  He responded, “Shortly before retiring from the Consulting Engineering world, we began looking for a place to retire in North Florida and found Fernandina Beach to be the perfect location that not only provided a new adventure but also contained some of the familiarities my wife and I grew up around in Savannah.  After retiring I found myself missing the daily routine of being in the engineering world and when I noticed the Advertisement by the City for an Engineer, I jumped at it.”

Effective with the start of the new fiscal year on October 1, George’s scope of responsibility expanded.  He now also oversees the Planning and Conservation, Building, Code Enforcement, and Parks and Recreation Departments.  His goal:  improve communication between City departments and between the City and the public.  He soon will begin meeting with various outside constituent stakeholder groups — builders, architects, and engineers — to discuss their concerns on current operations and seek input on ways to improve the approval process and reduce the amount of time needed to obtain permits for new construction.

George currently works out of an office in the Utilities Department, but hopes to relocate to City Hall in the near future where he can work more closely with the Building and Planning and Conservation Departments.  He recently hired Jimmy Parr, the new City Building Official, who will start October 18th.

George has come on board at a time when both change and challenges face the City.  Resiliency has consistently ranked among the top priorities of the Fernandina Beach City Commission.  If anyone had any doubts about the urgency of this matter, a drive along North Front Street this weekend during King Tide would have reinforced the need to protect the City from rising water levels.  Also among George’s challenges are the future of both the Atlantic Seafood building and Brett’s Waterway Cafe.  Work will begin soon on safety improvements to the existing rail crossings at Ash and Centre Streets as well as opening up the long-sought Alachua Street rail crossing.  And then there is the construction of the waterfront park and continuation of the resiliency for the downtown areas.

When asked what he would like to accomplish in his first year on the job, George replied, “Primarily just to assist in “jump-starting” some of the long-needed projects and improvements for the Community.  As with more municipalities on the southeast coast, Fernandina Beach must deal with hurricanes, sea level rise, stormwater, flooding, marina dredging, beach renourishment and protection issues, and the normal maintenance problems associated with the coastal environment.  With my background I hope I can bring some additional thoughts and direction into addressing these concerns.”

Charlie George will not be running out of projects for years to come.