Effective December 1, 2020, Oasis Marinas assumed management of Fernandina Harbor Marina. Owned by the City of Fernandina Beach, FL, the marina had been operated by Westrec for ten years prior to Oasis’ arrival.

Taylor Fitzsimmons, the general manager and dock master for Oasis at Fernandina Harbor Marina, updated the City’s Marina Advisory Board (MAB) on the status of the transtition from Westrec to Oasis during the December 28, 2020 MAB REgular Meeting. He was joined in his presentation by Eric Bradley, Oasis Vice President for Operations.

Fitzsimmons reported that in their first weeks of operation, Oasis has taken in over 300 slip reservations, including 4 that day alone. Oasis has retained and on-boarded three Marina Service Associates and an Assistant General Manager (Cathy Chapman). All long-term and transient vessels have been entered into the Oasis slip management system. The layout of the ship store/check-in office has been restructured and preparations are underway to begin a retail sales operation.

Site/safety inspections have been completed and outstanding issues have been addressed. Marina Utilities has removed all the old gas and diesal lines. Submittals for the new fuel lines have been received and are going through the permitting process with installation expected to begin in January and be completed in February. Fitzsimmons said that there have been no electrical issues reported since Oasis assumed operations.

An item high on Oasis’ priority list is improving WiFi access. AT&T has confirmed that fiber optic cable had been run to the Marina office 3 years ago, but not utilized. Oasis commissioned a site survey and is now awaiting the arrival of equipment to ensure that WiFi will be improved and functioning throughout the entire marina.

Slip rental agreements were transferred from Westrec to Oasis, but agreements were incomplete, lacking rate information and/or dates. Oasis requires all long-term slip renters to have a valid agreement to remain in the marina. The company conducted a marketing review and on December 17, distributed new slip agreements to long-term slip holders at the posted/advertised rate of $19.25 per foot per month. In some cases, this new rate reflected a 25 percent increase.

The rate increase affected 18 long-term slip holders, five of whom have already signed and returned the new agreement. The MAB members questioned Oasis representatives about the need for and the timing of the rate increase for long-term slip holders. They noted what they believed to be Oasis’ lack of understanding about small town marinas and the need to communicate more effectively with the local community on rates and pricing. They questioned how such a rate increase, announced on December 17, could be applied retroactively to the beginning of the month. They also noted that fuel services are still not available.

Under the new contract between Oasis and the City, there are no longer annual contracts, with the exception of Amelia River Cruises, which had entered a long term contract with the City prior to the Oasis takeover af rates above the $19.25 rate to secure their berthing space.

In response to concerns raised by MAB members and four public speakers, Eric Bradley acknowledged that some aspects of the turnover could have been handled better. All parties agreed that there are always “hiccups” and unintended consequences that occur during times of change.

MAB member Gerry Decker called for a higher level of trust between the boaters and the new marina management company, noting that Oasis had been hired to increase profitability of the marina and reduce existing debt. MAB Chair Kevin McCarthy asked Oasis to see if adjustments can be made to address the long-term slip holders’ concerns.

Martin said that he has already spoken to Oasis about issues asociated with the slip rental agreements. He credited Oasis with acknowledging that perhaps they had gone about this matter the wrong way.

Martin said, “There will be an improved dialog between Oasis and the City going forward.” He noted that this will be a discussion item on the next City Commission agenda, and he assumed that both Oasis and boaters would be there. “I believe, in my experience with them during their first 3 weeks here, they truly want to be a good partner. If I’m sitting where [the MAB is], this is not a good start to the partnership. So I think this dialog will continue.” 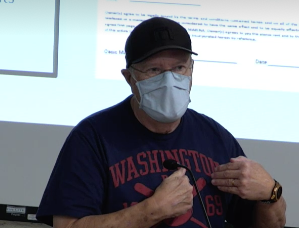 Mayor Lednovich said, “You are the Marina Advisory Board, If this slip rental agreement is problematic for you, boaters, and Oasis, the entire City Commission needs to hear that.” He sais that the Fernandina Beach City Commission (FBCC) will discuss the issue at its January 5, 2021 meeting. “I’m urging you to put these recommendations together so that you can appear — and I’m assuming the slip holders — and suggest what needs to be changed, in working together with Oasis. We need to get off on the right foot and get to win-win.”

Commissioner Chip Ross, in response to claims from some, who claimed that the City is trying to balance the marina budget on the backs of the boaters, said, “You know, I’ve heard from [the MAB} and slip holders. You know who I haven’t heard from? The taxpayers of this City are supporting the marina. We are $14.7M in debt, $6M of which predated Hurricane Matthew. This City has heavily subsidized the marina. And the people who live here with modest incomes don’t give a damn about your boat. And they don’t want to subsidize the marina. So we need to work together to come up with something for the people who use it and for the taxpayers.

“This is all about money. And if you don’t want your taxes to go up, the money needs to come from somewhere. The City has been putting $200-300K per year into this marina for years, and it has got to stop. We can’t afford it. The interest rate on the debt is close to $900K per year. That’s on the backs of the city taxpayers.

“We need to come together to come up with some sort of plan that allows you to have a place for your boat, but the rest of the City doesn’t subsidize it.”

Ross pointed out all the public opposition to any plans for upland development which could alleviate the financial burden. “Nobody wants a restaurant, a barge, or retail competition for Centre Street merchants,” he said. He went on to say that what people do want is flood protection, a walkable Front Street and a nice looking waterfront. “All those things are doable,” Ross said. “But it all takes money. This is a conversation about money. I understand that you don’t want to pay the money, but the taxpayer doesn’t want to, either. So who’s going to pay the money? We all need to work together to come up with somethng more creative.

“You’re going to hear this conversation from me over and over again this next year: it’s all about money.”

Ross pointed out other infrastructure needs in the City, such as the deteriorating City Hall building, constructed in the 1800s. “Don’t blame the City Manager. It’s the City Commission, it’s guys like me. And the ones who preceded us. The Golf Course has the same problem. The infrastructure problems have been put off for years, and now they need to be funded in some sort of rational way.”

Ross corrected a misconception that the City set the rates for the marina. He reminded MAB members and the audience that when the City set rates for the 2020-21 Fiscal Year in September, they declined to include the marina and the golf course. “People kept saying to us, ‘Run it like a business,’” Ross said. “So we hired managers and let them set the rates. The enterprise managers were not required to consult with the City on the rates.”

It was clarified through further discussion that transient boaters pay higher rates, and that there is a waiting list of boaters for long-term slips. Oasis has the ability to adjust transient rates for slow seasons and during special events, like Shrimp Fest. There will also be more revenue with the resumption fuel sales. However, it was explained that the City Budget requires certain income each from long-term slip rental, transients and fuel sales.

Following the extensive discussion on slip rental, Taylor Fitzsimmons reported that Oasis is in the process of compiling a 15-page custom publication which will be available to boaters in April highlighting local businesses and attractions. They are currently taking ads for the publication. They have revamped their website to feature the Fernandina Harbor Marina and are working on marketing marina slips for special events such as the Redfish Tournament in late January, the Concours d’Elegance, Shrimp Festival and TPC Sawgrass.