It took Michelangelo 4 years to complete painting the Sistine Chapel in the Vatican.

It took ten years for the United States to build the Panama Canal.

And now after more than 23 years of complaints and discussion, and multiple readings of multiple ordinances, the Fernandina Beach City Commission (FBCC) has finally passed an ordinance to deal with downtown newsracks.

At their March 20, 2018 Regular Meeting the FBCC unanimously passed Ordinance 2017-23, which provides for a limited number of such boxes or racks at specific locations. And most importantly to many, the newsracks will be of a uniform design and color (forest green).

Although initially the FBCC seemed to want to consider additional styles and preferred the color black, they were persuaded that because of the declining interest in print newspapers as well as coin operated vending mechanisms, there were not a lot of choices in the marketplace. Foy Maloy, publisher of the only city print newspaper (the Fernandina Beach NewsLeader), had expressed his concern that the Ordinance would be considered punitive if distributors had to comply immediately with new newsracks or even if they had to repaint the traditional green boxes black.

The issues and concerns about proliferating newsracks with no uniformity in style or color have been topics for discussion over the years not just at FBCC meetings. Discussions have waxed and waned in intensity over the years at Planning Advisory Board meetings, Historic District Council meetings, Fernandina Main Street meetings, and meetings of the Historic Fernandina Business Association.

Whether the FBCC was truly happy with the proposed ordinance on Fourth Reading, or whether they just wanted to go home after a long, contentious meeting, they passed the item in less than 3 minutes.

Look for less visual blight on Centre Street soon as the duke’s mixture of newsracks is replaced by uniform green boxes.  Under the ordinance, newsracks will be limited to specific locations as shown below: 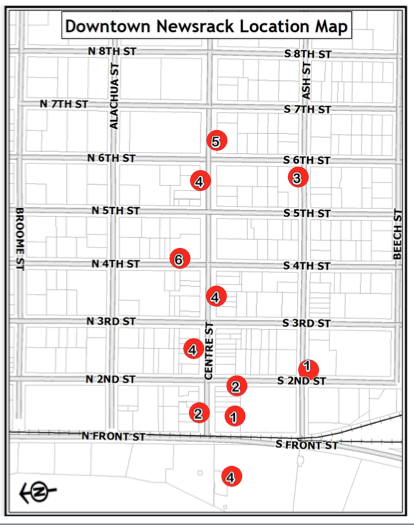