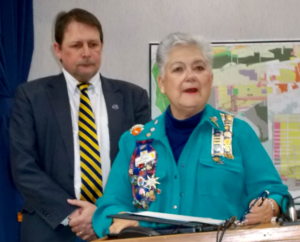 Miller noted that Native American Awareness Week began in 1976 and recognition was expanded by Congress and approved by President George Bush in August, 1990, designating the month of November as “National American Indian Heritage Month.”

In reflecting on Native American contributions, Miller said that their traditions and values continue to inspire the ideals of self-governance and determination that are the framework of the United States.  He also said that Americans must acknowledge the deplorable chapters of violence against Native American people. “While we cannot undo the pain and tragedy of the past, we can set out together to forge a brighter future of progress and hope across Indian Country and the entire American landscape,” he said.

In accepting the Proclamation Curtin thanked the city and encouraged visitors to the nation’s capital to visit the National Museum of the American Indian.  She said that a memorial to American Indians is set to open on Veterans Day 2020 next to the Museum.