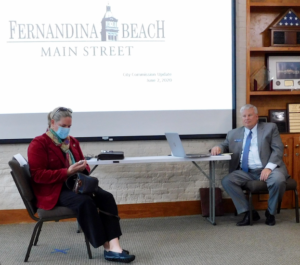 Under the constraints of the CDC guidelines, Fernandina Beach City Commissioners (FBCC) reverted to their normal practice of meeting collectively in City Chambers for their June 2, 2020 Regular Meeting.  Commissioners socially distanced themselves along their bench, each wearing a face mask.  Bumped from their usual perches, City Manager Dale Martin and City Attorney Tammi Bach sat at a separate table against the Chamber’s eastern wall.

Commissioners devoted the first hour of their meeting to a series of 10 discussion items identified in advance by individual commissioners and publicly noticed on the agenda.

Ongoing problems with beach parking and beach trash.  Commissioner Chip Ross reported that over Memorial Day weekend 40-60 percent of the license plates in the Main Beach area were out of state.  He suggested raising fines for both illegal parking and beach littering.  He said, “There is paid beach parking.  We [the citizens] are paying for it.”

The City and the Ocean Highway and Port Authority (OHPA) remain deadlocked over an interlocal agreement on moving the federal channel.  At the request of the FBCC, Attorney Bach will try once more to reach agreement with OHPA.  The City and OHPA will engage in public mediation over the $50K PILOT payment dispute on July 15, 2020 at the City Golf Course Club House.

Commissioner Ross, noting problems in getting through to City staff on emergency issues on the weekends, floated the idea of a weekend duty officer, whose job would be to field complaints and get them to the proper staffer for action.

Commissioners will support a wastewater rate reduction at a future meeting.

Commissioner Ross identified 3 City-owned parcels that the City could sell or return to owners:

Intergovernmental cooperation with Nassau County appears to have taken a step backwards with the County’s unilateral decision to open its beaches to county residents only, following an agreement that any such decision on beach reopening would be coordinated with the City.  The County’s decision pushed non-county beachgoers onto City beaches, adding to the  parking and trash problems.  Commissioners agreed on the value of intergovernmental agreements and cooperation but added that responsibility for honoring the agreements rests with both parties.  Vice Mayor Len Kreger said, “We get more when we get along,” but Commissioner Mike Lednovich added, “We  have to protect our citizens.”

Commissioners agreed to issue a Resolution at a future meeting naming the Atlantic Avenue Recreation Auditoriium for the late Joan Bean.

Complaints about Advanced Disposal’s failure to remove yard waste weekly from residential areas continued.  Commissioner Ross reminded commissioners that per contract, all yard waste should be bagged, and that Advanced Disposal has done the City a favor bypassing this requirement to continue pick up of unbagged yard waste by clam shell.  He reported that Fernandina Beach is the only Northeast Florida municipality to receive this service.  This response did not satisfy Commissioner Phil Chapman, who said that weekly pick up is also mandated by the contract.  Chapman said he would not support a rate increase for the company until they honor their obligations.

Resident Mike Meadows called attention to the ongoing problems of illegal brush dumping in the Via Del Ray neighborhood, along with the City’s failure to maintain the grassy mediian leading from the Parkway to the Golf Course.  He said that landscapers are depositing large piles of brush at the east end of the street.  Advanced Disposal is only required to pick up residential waste; when they encounter the large piles in that neighborhood, the piles are large enough to fill an entire truck.

The City has been grappling with this problem in this neighborhood and others for more than a year.  Those landscapers who are dumping material illegally must be caught in the act or otherwise reported for investigation.  The City will look to add signs to improve the situation.

Meadows also reported that he and some residents try to maintain the median strip, but other residents use it to place their garbage cans and to park cars.  He said that it presents a poor appearance as entranceway to the City Golf Course.  City Manager Dale Martin said that maintenance of the median is the job of the City Maintenance Department and that  he would explore signage and other means to improve the median’s appearance.

The 21 units at Phoenix walk use that site as well as our landscaper to place yard waste from our properties and common areas. using bags is not on’y impractical but, not friendly to the environment.

Please don’t take that away.

forgot to mention the real problem with our yard debris area is not other landscapers, but the county residents from Summer Beach using it,

Can we get the bushes and shrubs around access 25 cut and trimmed. This is an unsightly catch for trash of none citizens and provides cover for illicit activity. Citizens should not have to complain to have these area maintained.

City manager showing poor example for citizens – he is only one at meeting NOT wearing a mask.

I wonder if some of those elected leaders my be suffering from hypoxia. Wearing a mask for no good reason is like saying “Heil Hitler” to Medical Fascim. Most people won’t get the virus. Most people who get it will not have symptoms – according to Dr. Ron Paul.

typo….. I wonder if some of those elected leaders MIGHT be suffering from hypoxia.

This is inaccurate reporting. Nassau county did not close beaches to non Nassau County beaches. BEACH PARKING is open to Nassau residents and active military. The entire matter is awash anyway as there is ZERO enforcement. The real question is why is Nassau county ever allowing cars on the beach ?? 2 People run over, turtle nests between park cars ( last week photo from my neighbor). Think Nassau has budget problems in our future? Wait until the large payment received by the victims of vehicular hit and run. Why ? Gross negligence by the county for allowing driving and parking on the beach, that’s why.

Your comments are “inaccurate reporting.” Nassau county IS CHECKING to ensure that every vehicle parking on the beach is from Nassau county at Peter’s Point and American Beach. I know, I’ve been to both. Also, of the 2 people run over, one was in the City Limits (Seaside Park) and not in the County and he was almost immediately arrested.