The first Regular Meeting of the new Fernandina Beach City Commission (FBCC) got underway at 6:00 p.m. following the Reorganization Meeting on December 19, 2017. Newly elected Mayor John Miller did not gavel it to a close until 9:30 p.m. despite what had initially appeared to be a relatively light agenda. Most of the commission discussion centered on the city marina and the city airport:

• Commissioners unanimously rejected an award recommendation for RFQ 2017-04 to repair, design and build the south basin attenuator, destroyed by Hurricane Matthew in 2016, despite an evaluation committee’s recommendation that the award be made to OTAK Group, Inc. for roughly $6M. Commissioners will discuss how to proceed at their second meeting in January.

• Commissioners unanimously supported the award of RFP 2017-23 to conduct a marine engineering assessment of the conditions and integrity of the pilings beneath Brett’s Waterway Café. However, they rejected the evaluation committee’s recommendation of award to McLaren Engineering and instead awarded to the low bidder, PI-Tech, for $8,500.

• On a 4-1 vote (Commissioner Chip Ross dissenting) the FBCC authorized the issuance of an airport refunding revenue note in an amount not to exceed $1.450M to finance airport improvements.

Commissioners continued to express unhappiness with the city’s bid process, demanding to see improvements quickly. They also expressed a desire for more public information on progress on both the marina repairs and the airport terminal project.

Commissioners also asked for more back up materials for all their agenda items.

With the FBCC’s decision to reject all bids for repairs to the city marina’s attenuator, it is all but certain that the deadline for completion of these repairs by Shrimp Festival 2018 cannot be met.

It was City Attorney Tammi Bach’s opinion that in the final analysis only one lawful bid had been received to proceed with marina repairs pursuant to RFQ 2017-04, although five vendors had submitted bids. Both she and City Manager Dale Martin had recommended initially rejecting all bids and re-advertising to seek more qualified respondents. However, the Evaluation Committee (City Manager Dale Martin, Marina Manager Joe Springer, boat captains Kevin McCarthy and Scott Stewart) determined that the sole lawful bidder was responsible and qualified.

Furthermore, the Evaluation Committee recommended that ATM serve as the City’s design/construction project manager, given the lengthy relationship between the City and ATM and the lack of qualified staff to ensure and validate proper design and construction. The City Attorney added that although ATM may be preferred to serve as a design/construction project manager, the City will need to solicit qualifications for that purpose pursuant to CCNA, F.S. 287.055.

Commissioners agreed that OTAK, the recommended bidder, was qualified to do the job. However, they discussed at length the problems they saw with the manner in which the bid documents had been prepared and advertised. They identified missing items – cost of a gangway and electrical upgrades – and concluded that the best way to proceed was to reject bids and advertise once more with clearer bid requirements. The FBCC tasked City Manager Dale Martin to return to them with a new plan to proceed at their January 16, 2017 meeting.

RFP #2017-23 was posted to solicit proposals to review the two 2015 reports (including conversations with the authors of said reports), conduct an inspection, and offer a conclusion regarding the substructure. Two complete proposals were submitted: one from Pi-Tech and the other from the McLaren Engineering Group. The Evaluation Committee (Marshall McCrary, Andre Desilet, and Dale Martin) reviewed and discussed the proposals.

In 2015, two separate engineering reports were provided to the City regarding the condition of the substructure of the facility that currently houses Brett’s Restaurant (owned by the City, and leased to the Centre Street Restaurant Group). The reports offered substantially different conclusions regarding the substructure: one indicated serious concerns while the other reported no problems.

The Evaluation Committee recommended McLaren Engineering Group as the better qualified based upon their experience in maritime engineering and government work. They were the higher priced of the two proposals: $14,285. Funding for this project would come from unspent funds under a Community Development Block Grant given to the city 30 years ago.

Commissioners engaged in discussion over the value of such a project. The outcome of the study would not insulate the city from a legal challenge. Should the third engineering group confirm the concerns regarding public safety, the city could be forced to act, declaring the structures unsafe and requiring the lessee to fix the safety issues.

Commissioners rejected the Evaluation Committee’s recommendation. While they agreed with the need to conduct the study, they saw no need to engage the more expensive of the two bidders. They unanimously approved making the award to Pi-Tech in the amount of $8,500.

The City issued RFP 17-24 on November 8, 2017, to solicit proposals to refinance the Airport Revenue Note, Series 2007; and to borrow additional funds for the City’s share of the General Aviation Terminal. The City’s Financial Advisor developed the Request for Proposals and the City received two qualified proposals. The City’s Financial Advisor and City staff recommended accepting the proposal from Ameris Bank.

This debt refinances a portion of existing Airport debt and provides new financing in the amount of $1,000,000 for the City’s share of the Airport’s General Aviation Terminal. The new bank loan has a 15-year term and carries a tax-exempt interest rate of 2.89%. The rate will be adjusted should the bank’s corporate tax rate be adjusted under the IRS tax code. This refinancing and additional funding was included in Fiscal Year 2017/2018 budget. 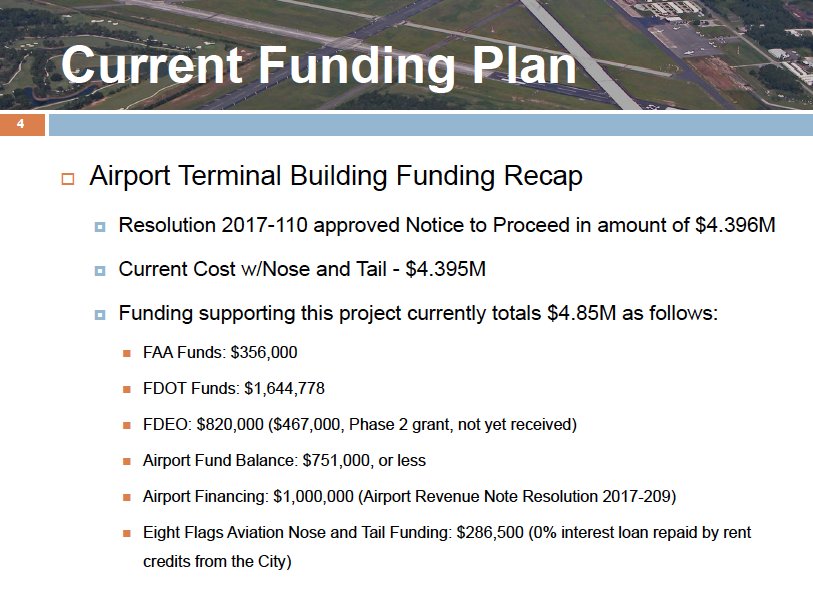 Some commissioners had expressed interest in knowing what it would cost the city to halt the current project or change the design of the structure, which is already under construction. Airport Manager Nathan Coyle provided commissioners with a detailed presentation showing how much money has been spent to date on the new airport terminal. Coyle and City Attorney Bach estimated that it would cost the city upwards of $2.5M to pull the plug on the project at this time. Such action could result in jeopardizing future FDOT and Department of Economic Opportunity grants, as well as FAA support. It might also result in a lawsuit from 8 Flags Aviation, the new FBO, which has also invested in the project. Coyle assured commissioners that the project is proceeding according to schedule, with occupancy of the new terminal slated for the end of April 2018. 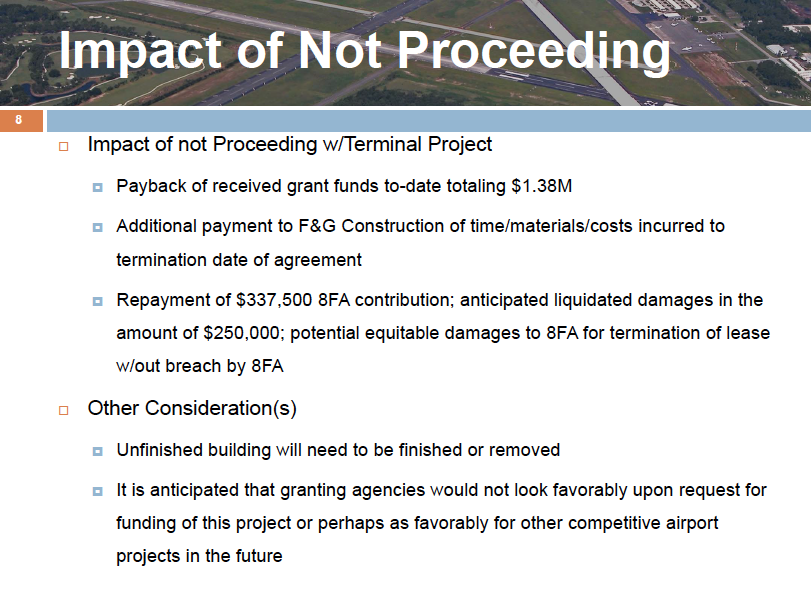 Vice Mayor Kreger, who also serves as liaison to the Airport Advisory Commission, reminded commissioners that if the project were to be stopped, the city would be left with no FBO, since the existing building, still operated by McGill Aviation, was extensively damaged during Hurricane Irma. There would still be expenses incurred to build a new structure.

Two members of the public, Andrew Curtin and Robert Erickson, spoke on this item. Curtin continued to argue against the current design; Erickson expressed his opinion that the planned terminal is “too fancy” for the needs of the aviation community.
Kreger attempted to refocus commissioners’ attention on the matter at hand: approving the revenue note, not revisiting the terminal design.

Commissioners asked whether money could be taken from reserves, as opposed to borrowing. Comptroller Patti Clifford said that there were insufficient reserves to cover this amount, and that the agreement to borrow funds had been fully comprehended in the city’s FY2017-18 budget.

When the vote was taken, only Commissioner Chip Ross voted against the measure. Other commissioners, who were not comfortable with the design, reluctantly voted in favor of the revenue note, having concluded that the project had advanced too far to stop.