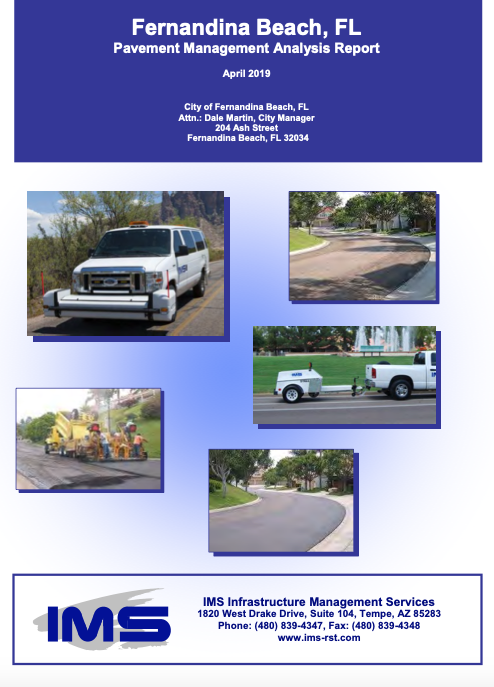 At a Fernandina Beach City Commission (FBCC) workshop on March 15, 2020, City Commissioner Chip Ross presented his case to fund annual road maintenance at the level recommended by consultants in the 2019 Pavement Analysis Report in order to maintain or improve the 68.7 miles of City roads and streets.  Ross cited the road network valuation at $44M, making roads a highly valuable asset of the City that needs to be maintained.

Ross said that the City is not funding this asset sufficiently to maintain it.  The consultants provided the City with a wide range of options for road maintenance.  To improve streets that are near failure and to maintain those rated as good to excellent, consultants recommended budgeting $540K per year.  This year, $342K was budgeted for resurfacing roads and streets.

Ross pointed out that the estimates were made in2019 dollars and did not include parking lots or peripheral concrete rehabilitation work such as valley gutters, inlets, or approaches.

Because the City has not dedicated sufficient funds for road care, the situation is deteriorating, Ross claimed.

He asked that the FBCC follow staff recommendations and those presented in the consultants’ report to adequately fund the City’s road budget.

Vice Mayor Len Kreger expressed his willingness to commit to fund the road budget at the recommended level.  “I fully expect,” he said, “that the 5-Year Capital Improvement Plan will address what’s necessary and we will fund it.”

Commissioner Bradley Bean said, “I firmly believe that our roads are well maintained.  I have full confidence in our staff that they will continue to maintain our roads.”  He cited the 2019 Pavement Analysis Report, noting that the condition of City roads averaged 72 on a scale of 0-100.  “I want to thank our staff for making us the proud owners of some very good roads. What we’re doing is working,” Bean said.

Mayor Mike Lednovich said the City is playing catch up because budgeted spending has been less than needed over the past few years.  “I would agree with the Vice Mayor,” he said.  “Roads are things that everybody uses…. Yes, we have to fund roads.  That’s at the very top of the list.  It shouldn’t be a surprise to anybody that our City is at a tipping point.”

Commissioner David Sturges said that the budget will determine whether the City can spend the recommended amount on roads.

Ross said, “The budget is what we are willing to spend.  We set the tax rate; we set the millage rate.  We need enough money to fund roads.”

Lednovich said that the discussion was on the verge of morphing into a budget debate, and he did not want to go there at this time.  “We’ll have lots of time and energy to debate when the budget is presented,” he said.