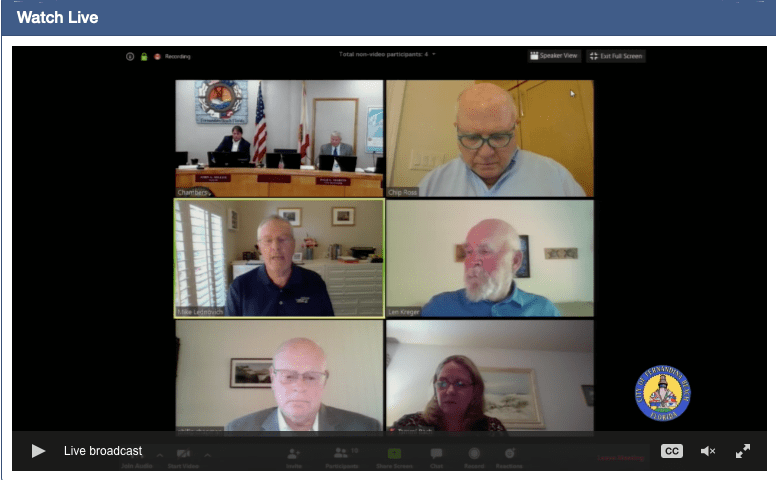 It was a Fernandina Beach City Commission (FBCC) meeting unlike any other, not particularly because of the business covered, but because of the format:  a virtual meeting in which only Mayor John Miller, City Manager Dale Martin and City Clerk Caroline Best attended in person.  The remaining commissioners and City Attorney Tammi Bach attended via video conferencing.  No members of the media or the public were allowed to attend in accordance with Coronavirus guidelines; city staff was likewise excluded for the most part, except for IT Director Dana Whicker and Help Desk Specialist Troy Woleshin who were on hand to deal with the challenges of linking all the participants from multiple locations onto one screen accessible to the public via the City’s website or Comcast channel 264.

For the most part, the format worked, once the initial problems were sorted out.  Despite two earlier “dress rehearsals,”  the public broadcast did not kick off at the 6:00 p.m. start time of the April 7, 2020 Regular Meeting.  Viewers also complained about sound quality.  Volume was low and in some cases, there was an echoing effect.

When Mayor John Miller called the meeting to order at 6:00 p.m. on April 7, 2020, there was no audience physically present.  But thanks to advance notice of the change in procedure, interested members of the public were allowed to watch the proceedings from home and provide comments/questions via City Manager Dale Martin.

Martin read the eight public comments he had received into the record.  Three dealt with the issue of closed beaches, with two calling for reopening beaches with restrictions and one asking that beaches remain closed.  One called for reopening the City Golf Course.  Two supported actions to strengthen the City’s tree ordinance and declare an additional Heritage Tree.  And two called for reexamining planned City expenditures in light of the Coronavirus pandemic.

Commissioners did not address the public comments directly.

City Attorney Tammi Bach reported that she believed the meeting went well, but that she wanted to watch the recording to see it from the public’s perspective.

Comments on the format from Commissioners were mixed.

Vice Mayor Len Kreger replied, “From my point of view it was acceptable, but my concern is lack of citizen participation and the availability of staff to participate.”

Commissioner Mike Lednovich, who from a viewer’s aspect seemed most comfortable with the format, wrote, “Having watched parts of the replay this morning, the sound quality that resembled an echo chamber was not the greatest. It was also interesting to be able to see the facial reactions of my fellow commissioners while speaking. Normally we’re facing outward towards the audience and cannot see each other because of the configuration of the Commission seating. The inability to display slides of information was a problem and we totally lost the effectiveness of public comments from the public by having them read into the record. So, some good and some bad.”

Commissioner Chip Ross said that he was fine with the format.

Technical problems seemed greatest in the connection to Commissioner Phil Chapman.  He was dropped completely a couple of times.  Nonetheless, he reported, “I thought it went well.  I got a little confused about when I was muted and when my hand was down but all in all this tech moron got through it well.  I need to find out why the computer “timed out” my video camera.  Great job from IT and Caroline for pulling it off.”

The meeting, with one break for technology reasons, lasted three hours.  City Clerk Caroline Best anticipates that this format may continue for one or two more Regular Meetings.