At the January 18, 2018 meeting of the Fernandina Beach Historic District Council (HDC) sixteen speakers, including two city commissioners, expressed their opposition or reservations regarding a proposed 10-townhouse development on the S. 9th Street and Ash Street sides of what is today the Buy-Go parking lot. Named “The Grand Oak Townhouses,” this development would occupy half of the property on which it is sited. Following the public hearing and extensive board discussion, the HDC voted to continue the case, instructing the developer to take into consideration the comments raised in bringing forward alternative designs for further consideration. No date was set for the next hearing. 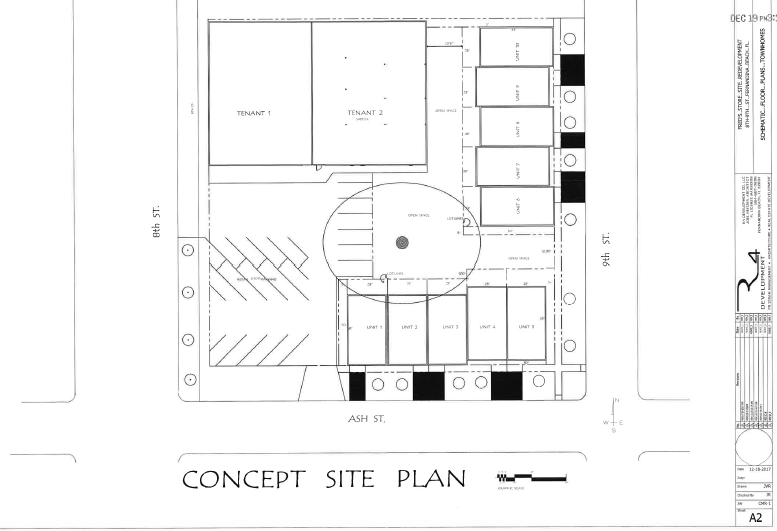 CMR Island Properties sought conceptual approval for the construction of 10 attached, single-family townhouses on what today serves as the parking lot for Buy Go located in the former Fred’s Store on S. 8th Street. The HDC provides “Conceptual Approvals” as a courtesy to the applicant in an effort to allow HDC and public comments to be considered during the design process. No project can proceed to permitting until it receives Final Approval. In this particular case, several additional pre permitting approvals will be required, including a demolition approval for a portion of the existing commercial structure (HDC) and variance approvals (HDC).

In addition to its location in the Historic District, this property is also located in the C-3, Central Business District zone. The centerpiece of the property is an 80” DBH (diameter at breast height) live oak, which the owners agreed to have designated a Heritage Tree. 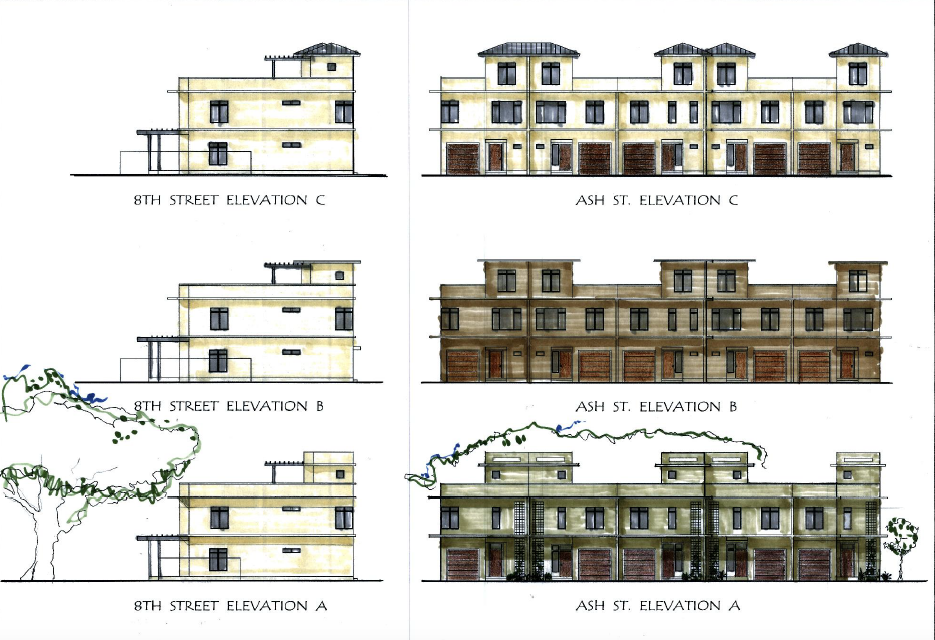 The plan as presented took design inspiration from surrounding commercial structures dating to the mid 1950’s. The developer has proposed a one-car garage for each townhouse, accessible from the front of each building. Although developers are not required to provide parking in this zoning district, CMR believed that garages would be a positive marketing point. Rear parking, or rear access to parking, would not be possible given plans to save the Heritage Tree. 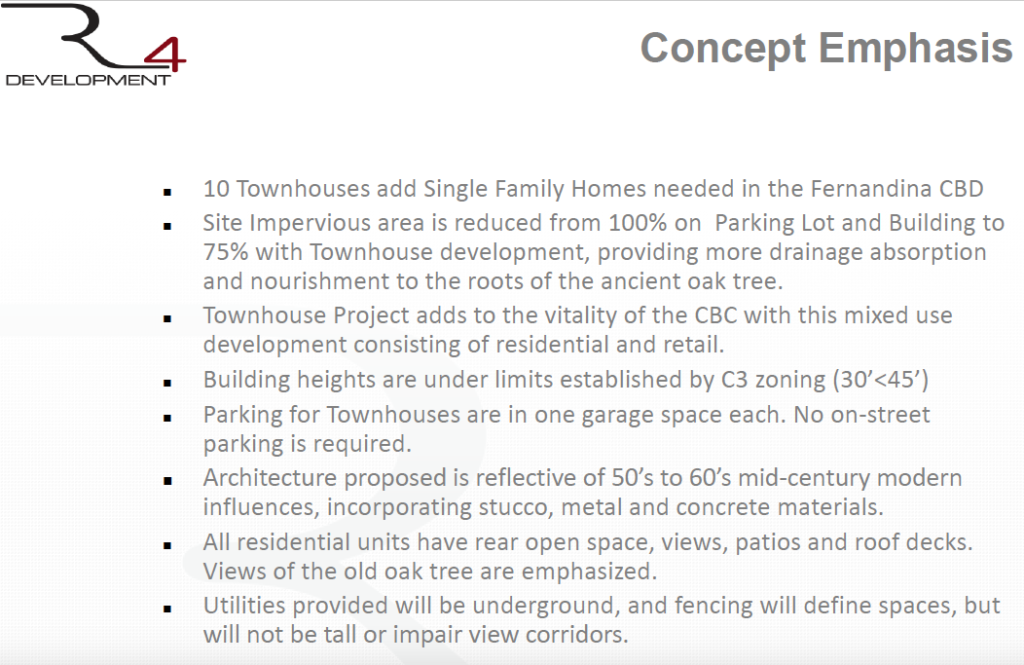 Sal Cumella, the city’s Historic Preservation Planner, presented his staff report on the development application. He explained the various policies and guidelines that must be considered in allowing the project to move forward. He raised concerns with respect to the proposed lot width (23’), which does not meet the minimum width required by code. Cumella also recommended against the proposed garages on the grounds that the shallow access drives could block sidewalks from pedestrian traffic.

The proposed plan does not meet the minimum requirements for tree planting, triggering the need for a variance. Cumella cited the absence of design detail as an issue to be addressed as well as the need for elevations showing streetscape to demonstrate how the development would fit with the surrounding district.

He recommended Conceptual Approval with the condition that the applicant incorporate staff and board comments into their final submission.

While speakers praised CMR, the project developer, for efforts to preserve the Heritage Tree for which the project is named, they expressed concern that removing the asphalt that surrounds the tree roots as well as the townhouse construction could imperil the health of the tree.

Many members of the congregation of First Missionary Baptist Church, located across S. 9th Street from the project, expressed their concerns. Pastor the Reverend Dr. Darien K. Bolden, Sr. and other congregation members saw nothing “historic” about the project, citing fears that their historic church building would be hidden by what appeared to be a massive housing block. They identified parking and traffic problems that would result from adding townhouses the neighborhood. They also voiced fear that crime would go up in the neighborhood should the project be approved.

Neighboring B&B owners also opposed the project, citing parking and traffic concerns also as well as concerns that the ambience of the neighborhood would be adversely affected, as well as their businesses and property values. Fears were expressed that the townhouses would be part-time residences that would be offered as short-term rentals for vacationers by Airbnb.

Speakers seemed to be of the same mind in expressing the following concerns:

Members of the Historic District Council appeared to be uncomfortable considering the case with so many outstanding questions. Member Bill Tilson questioned HDC’s consideration of a design that assumed approval of a demolition that had not yet been requested. He also noted that the design might need to change depending on whether variances were granted for lot width and landscaping elements.

Chairman Michael Harrison expressed his desire to deny the case as presented, but member Michael Spino suggested that perhaps a better approach would be to continue it to another meeting, thereby giving the applicant time to consider and incorporate concerns raised by the public and the HDC.

Tilson, a design professional, said that there are many architectural styles in the neighborhood but that he felt the proposed design had been oversimplified because of a desire to conform to the design of the commercial building on site. He said that he believed it was a good idea to propose reuse of a parking lot to bring more vitality to the neighborhood, but added that he believed “significant work” needed to be done on the project. He said that he understood that accessing parking from the rear of the units was not possible because of the Heritage Tree, but was not convinced that the proposed street facades were a good design. “If it were my project,” Tilson said, “I’d redesign it.”

James Pozzetta, an architect who serves on the HDC, also expressed his uneasiness with conceptually approving the project as presented. He said, “The rhythm of the community is lacking for this project.” Pozzetta suggested that perhaps some of the concerns could be addressed if fewer units were proposed for the site. He went on to state that since “every part of this project will be visible from somewhere,” view corridors were very important. He said, “I want to understand it in context [of its surroundings].”

Member Spino said, “We need to keep talking about this.” He went on to express concerns that with all the construction going on in the neighborhood, denial of this case could result in something else being proposed for the site, which would not be well received by the public. “We need to find a solution that will work for the community and the neighborhood,” he said.

Spino, who received a second from member Angela Conway, moved to continue the case until it could return with modifications reflecting concerns of the public and the HDC. The motion passed unanimously.

Member Robert Erickson did not attend the meeting.

A brief note on “contextual fit”

“Contextual fit” is a concern for architects proposing projects for inclusion in developed areas. In this particular case, the project proposed is residential but is located in a commercially zoned area in a historic district. Architects are advised not to propose designs that might confuse the public into thinking that new construction is “historic construction.” At the same time, design should not distract from the existing historic structures.

An example of “contextual fit” on Centre Street is the Century 21 Building at 5th and Centre Streets. This design incorporates neighboring historic structure elements such as the arched entrance, the belt course above the arches, the hip roof and the color palette. It does not detract from either the neighboring historic Nassau County Courthouse or the Post Office Building. At the same time, even the casual observer would conclude that it was built later than the historic period of Centre Street.