During their Special Meeting on February 18 which preceded the workshop with the FBCC, the HDC received updates from City Building Official Stephen Beckman and Code Enforcement Officer Michelle Forstrom on what had been cited as a dangerous building at 314 North 5th Street in the downtown Historic District.  Historic Preservation Planner Sal Cumella reported that the property owner was working cooperatively with City staff to correct deficiencies and convert the residence back into a single family residence.

Cumella provided both the HDC and the Fernandina Beach City Commission (FBCC) with a list of six properties which he identified as properties of concern/opportunity to the Historic District.  The HDC accepted Cumella’s assessment of the value of these properties for rehabilitation and/or inclusion in the Historic District.  However, they decided to delay inclusion of the Huot Building at the present time because the building is in transition to new ownership:

Later in the workshop with the FBCC, commissioners appeared willing to endorse this list as well.  They discussed the process of adding properties to the Historic District and whether properties could be added without the agreement of the owners.  The answer is complicated, according to City Attorney Tammi Bach, and would not be considered as a first step. 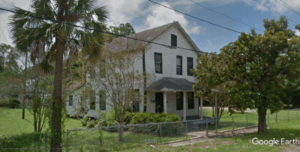 This 1.23 acre property consists of 20 underlying 25’ lots of record. The property contains four single-family residential homes and associated accessory structures belonging to the Tringali family. The Tringali family played an important role in the development of the modern shrimping industry in Fernandina.

This site is not located within the City of Fernandina Beach’s Downtown Historic District or the Community Redevelopment area. There is no mechanism in place that would require review of the site as a cultural and historic resource if a future owner were to seek demolition of the Tringali House. Due to the properties size and location, development pressure is high for this site.

Cumella suggested that this property represents a good opportunity for possible adaptive uses of the site to serve a modern function, while telling the story of Fernandina through the lens of the Tringali family. Possible uses include the rehabilitation of the Tringali House to serve as office space for local non-profit preservation agencies, such as the Fernandina Beach Main Street program and the Amelia Island Fernandina Restoration Foundation. The historic wood frame accessory structure on the property could serve as a community meeting room that could feature artifacts and displays that tell the history of the Tringali family and shrimping in Fernandina. The site would have adequate land for parking to serve its needs, as well as provide for additional parking downtown. 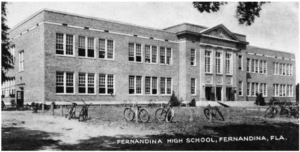 Not currently located in the Historic District, this building housed Fernandina Beach High School.  It is located on more than 16 acres currently owned by the Nassau County School Board.  If the School Board were to vacate the structure in the future, redevelopment of this site would not require any review that would ensure the proper treatment of this historic resource. 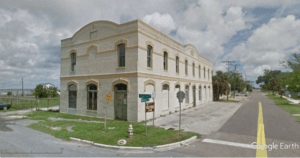 This structure, built in 1882, is not located in the Historic District, but it is in the CRA.  It has been vacant for many years and its condition has deteriorated due to lack of maintenance.  It appears that ownership of this building is currently in transition, with new owners expressing an intent to restore the exterior of the building, but not necessarily include it in the Historic District.

Sitting on almost an acre of land adjacent to the downtown Historic District at the entrance to downtown, this property is significant for its location rather than its building, which was constructed in 1979 on the site once occupied by the Keystone Hotel.  Future redevelopment of this site would not be subject to any architectural review because it is outside the Historic District. 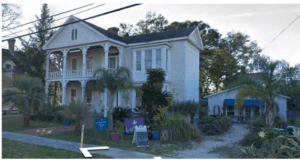 This two-story Greek Revival style residence was designed by John Hedges and built in 1872 for William N. Thompson, a Florida State Senator and railroad man. It is one of three homes built adjacent to each other for members of the Thompson family.  This property is vacant and distressed due to demolition by neglect. The exterior of the home is showing signs of severe deterioration. 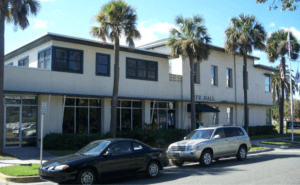 Constructed in 1904 and significantly altered over the years, a number of the later additions were of poorer quality and materials and they have begun to deteriorate and fail.  Between the failing additions and the space constraints that challenge housing a growing city staff, actions will need to be taken soon.  It is located in the Historic District, but not in the CRA.  Development pressure is high for downtown, as developers are seeking land downtown to construct residential projects. This parcel consists of 8 underlying platted lots of record.

Thanks go to Sal Cumella for his extensive research into each property.