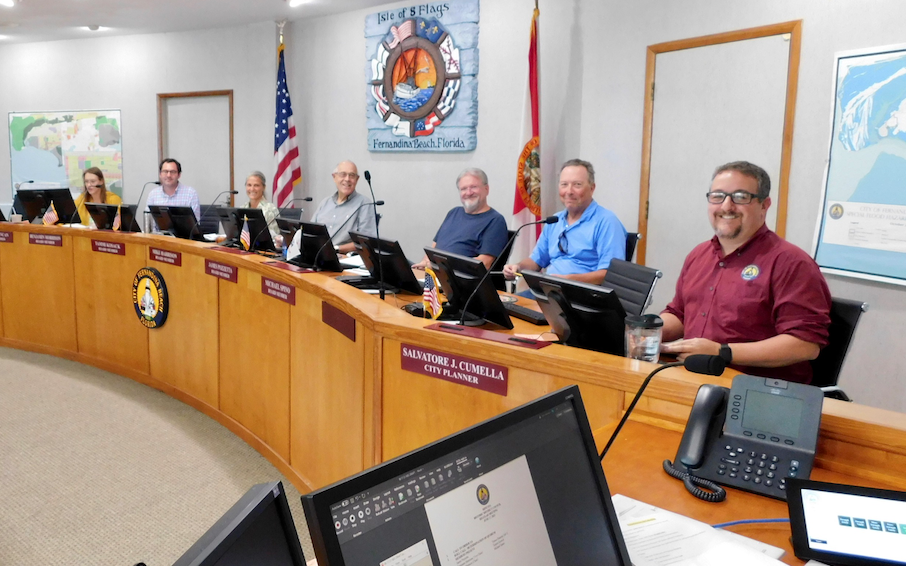 They are back together again!.  The Fernandina Beach Historic District Council (HDC) met to consider a number of cases on June 17, 2021.  Members were mask-less, resumed their normal seating, and faced a chamber full of seats (mostly empty).  In addition to considering residential construction applications, the HDC tackled some cases of wider interest to the community.

The HDC granted final approval for the demolition of the existing building at 302 Centre Street and the design of the proposed replacement.  Conceptual approval had previously been granted in December 2020. 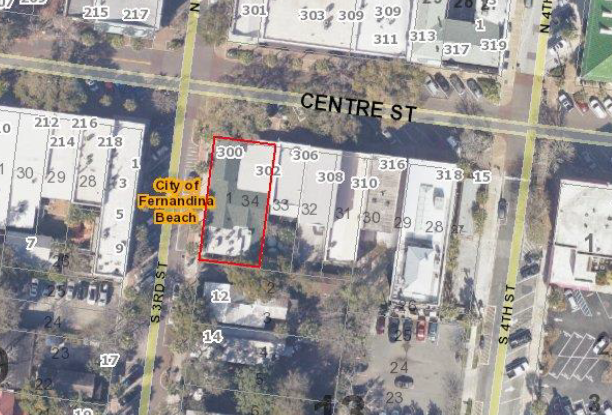 According to the staff report, “The existing parcel has been continually in use since at least 1882, as evidenced through the 1884 Sanborn Fire Insurance Map and the 1884 J.J. Stoner Bird’s Eye View of Fernandina, Fla. The structures change uses and footprints on the Sanborn Maps with the buildings disappearing between the 1926 map and the 1949 map. The 1949 map shows a footprint listed at a “filling station.” Staff has reason to believe that portions of the filling station may exist within the shell of the expanded building footprints. Although some portions of the wall of the filling station may still exist, the building does not date to the District’s period of significance or retain any integrity.”

John Cotner, project architect and agent for the owner, said that he will apply for permits to construct the new building when demolition begins on the existing structure, to minimize the amount of time the lot will remain vacant.

Architect Jose Miranda, agent for Tom Flannery, sought and received conceptual approval to construct new 2-unit and 3-unit residential townhomes on the west side of North 2nd Street between the Palace Saloon and the Crab Trap Restaurant.

A Certificate Of Appropriateness (COA) to demolish the existing structure had been approved several years ago when a different owner proposed development on the site.  The new plans call for incorporating part of the original structure into a new townhouse development.

The photo below, courtesy of the Amelia Island Museum of History, shows the structure’s original use as a bus garage.  Preservation planner Sal Cumella said, “This vernacular commercial structure appears on the 1949 Sanborn Fire Insurance Map as a “bus garage.” It does not appear on the next earliest map, which is 1929. Built by Wayne Frank McJunkin (1890-1973), it served as a transportation hub for his McJunkin Bus and Truck Service, which provided transportation between Jacksonville and Fernandina.” 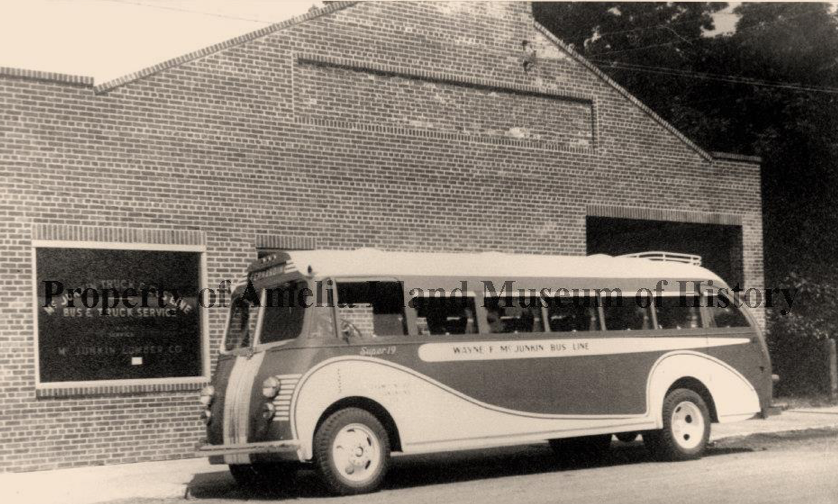 The new townhouse development will remove the stucco from the original brick.  The townhouses will be set back from the front lot line.  The parapet will disguise mechanical equipment; elevators will be internal to each unit.  The third floor is set toward the back of the buildings, making the view from North 2nd Street less massive. 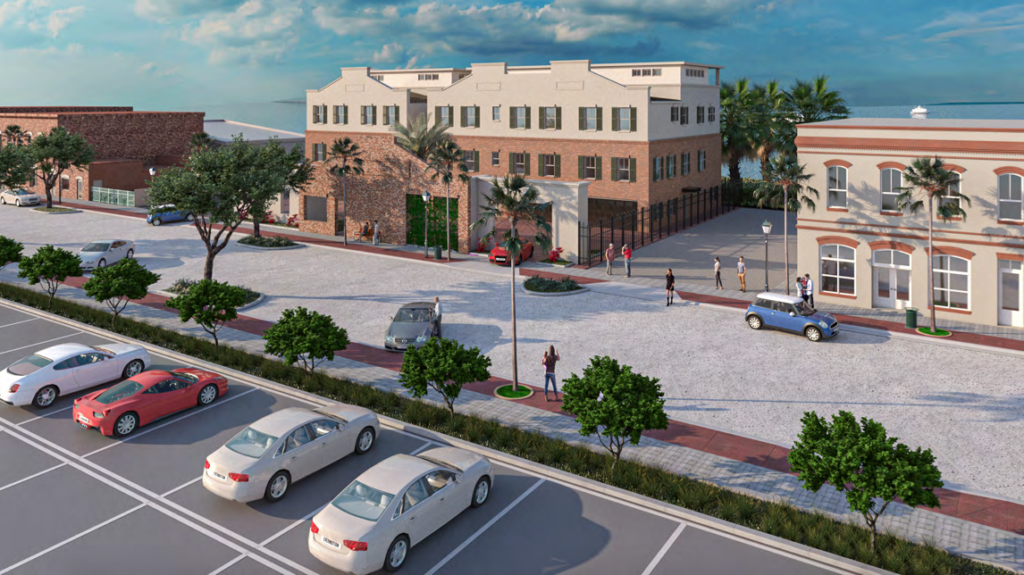 Architect Mike Stauffer, agent for Ernie Saltmarsh, sought and received conceptual approval to relocate the existing waterfront warehouse at 231 North Front Street to city-owned property east of the building that houses Atlantic Seafood.  The HDC agreed to delegate to staff final approval for the actual location and placement of the building. 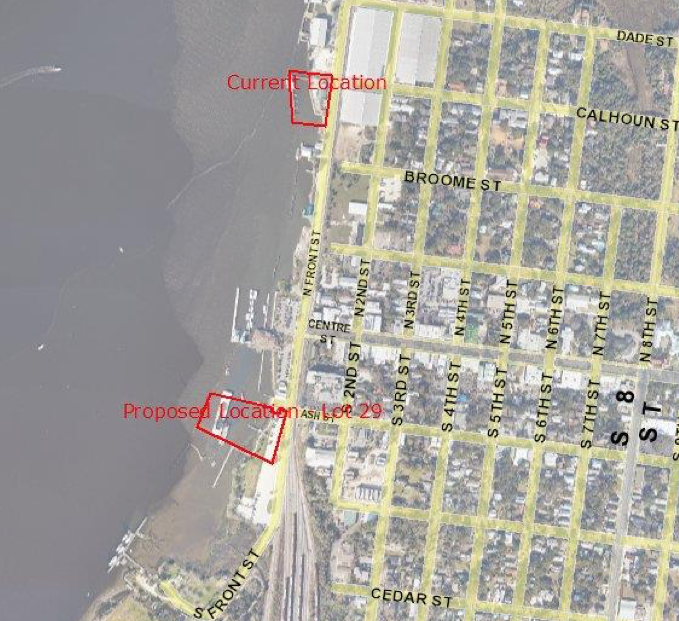 The future of this building has been the subject of much recent discussion.  The current owners have applied for permission to demolish the building, for which they have no use.  However, some members of the community have noted unique architectural elements of the old warehouse and have campaigned to save it in a waterfront location.

Despite HDC action to approve the move, there are other challenges that must be confronted.  The current owners want the building gone from their property no later than July.  The Fernandina Beach City Commission (FBCC) has not approved any vertical structures for land that has been identified as a site for a waterfront park.  The FBCC has repeatedly said that it is not interested in the warehouse, meaning that any expenses must be borne by a private owner.

Should the building eventually move to the site in question, it may be used as a replacement for the building that currently houses Atlantic Seafood.  The HDC will be called upon again to approve any exterior alterations to the building.

To view all the information provided to the HDC for these cases and others heard on June 17, 2021, click here.