In response to questions and concerns raised by both City Commissioners and audience members concerning the City’s purchasing and replacing vehicles in its fleet, Fleet Manager Jeremiah Glisson made a presentation at the August 5, 2020 Fernandina Beach Budget Workshop. He provided background to current policies which were implemented in 2005/2006, in addition to providing information on the nature of the fleet and the various methods the City employs to maximize efficiency while saving costs in both maintenance and vehicle purchasing.

Glisson said that the City’s 250 unit fleet valued at $12M is one of the most expensive assets the City owns. The fleet “acts as rolling billboards” as the vehicles drive around town. These are reasons why planned replacement much be a priority, Glisson said.

What many people may not realize is that the fleet consists of a wide variety of wheeled vehicles, ranging from trailers and lawn mowers to heavy duty equipment trucks as well as fire trucks and police cars. “If it rolls, it’s part of our fleet and we take care of it,” Glisson said.

The first vehicle fleet policy was adopted in 2005/06 to centralize vehicle purchasing and replacement. Up to then, each Department selected its own vehicles based upon their preference for brand or features. The move to centralization brought down costs by helping the City reduce downtime, increase safety and liability in addition to allowing the City to take advantage of group purchasing prices. Standardization and uniformity also streamlined vehicle maintenance operations. The City was able to take advantage of online auctions to sell used vehicles that had fully depreciated prior to either vehicle failure or repairs which were both costly and placed vehicles out of service for lengthy periods.

The plan calls for replacing vehicles at the optimum time, when the cost of ownership is at its lowest. Glisson explained the various models he uses to determine when time has come to replace a vehicle. He researches national standards and networks with other cities.

Even so, the diversity of the City’s fleet presents its own set of challenges. “There is no one cut for everything,” Glisson said. The City must factor in allowances for emergencies, such as accidents which could total a vehicle or put it out of service for lengthy periods. An emergency vehicle cannot remain out of service for a lengthy period without endangering public safety.

“Once you have vehicle failure, it’s too late,” Glisson said. A vehicle that is ready for the junk yard has no resale value.

Glisson went on to explain the City’s 3-tier replacement plan. He presented a chart that showed what has been removed from the current rotation plan in light of budget concerns, reducing his budget by $1.2M for the new Fiscal Year. High on this year’s priorities is replacement of a rescue unit ($265K) and a stormwater vacuum truck (lease/purchase at $425K). Glisson said that those two vehicles make up the bulk of the vehicle replacement program for the coming year. 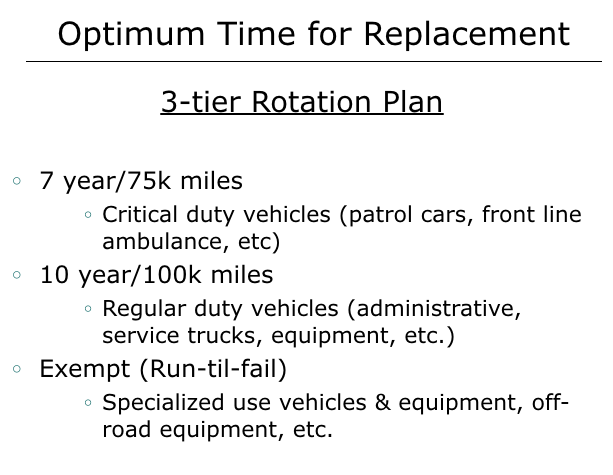 “Why not keep a vehicle until it is junk?” Glisson asked. He said that maintenance costs can exceed the value of the vehicle with age and climate effects. Resale value is also a consideration. “The City has a good surplus program, and it works,” he said. “Buy low (sometimes with group discounts as much as 40 percent) and sell high is good policy.” 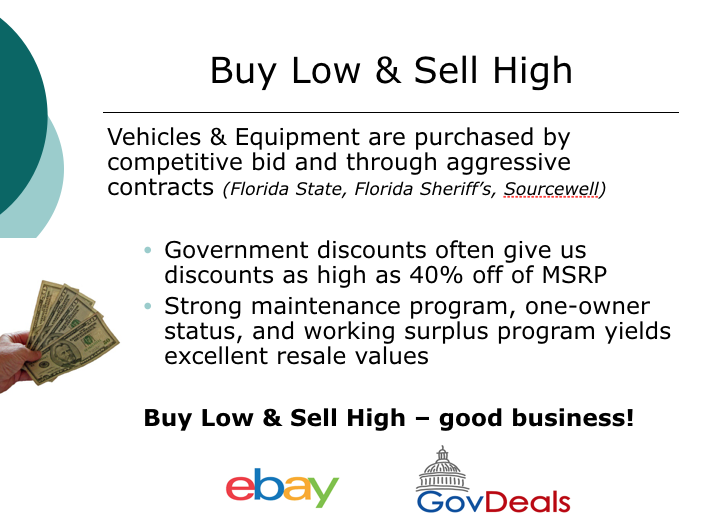 In 2007/08, the City started selling used vehicles on line through Ebay and GovDeals. Surplus revenue is around $100K per year. 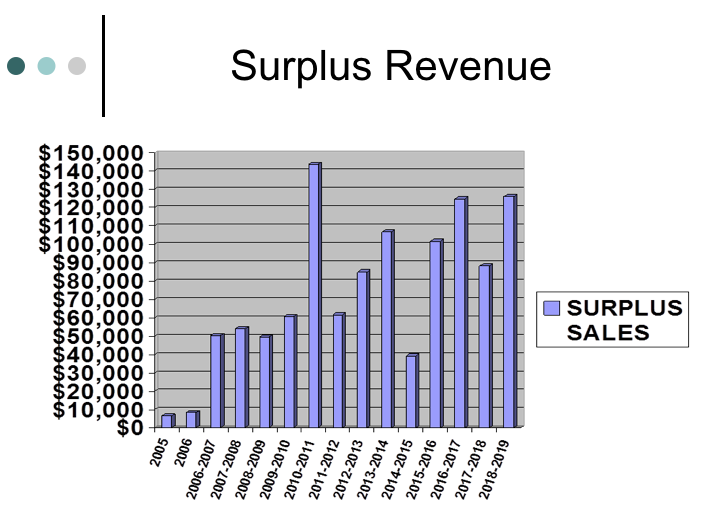 Glisson reminded Commissioners that the City continues to make adjustments to planned purchases. But he cautioned them not to abandon the rotation program. “Postponing or deferring purchases provides a short term fiscal band-aid,” he said. “A rotation plan works, and is a standard management practice.”