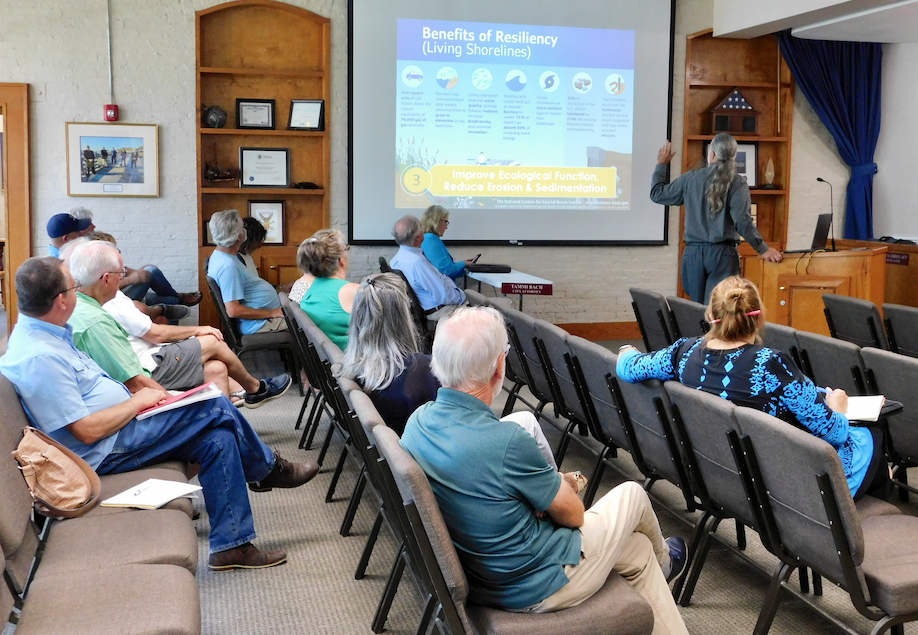 If the Fernandina Beach City Commission (FBCC) awards the $2.6M contract at their July 20, 2021 Regular Meeting, construction work on the first phase of the Amelia River waterfront resiliency  program will begin in August.  The goal of the project is to protect the waterfront and downtown area from rising water levels during high tides and storms up to a level of 9 feet, the protection level of  Rayonier at the south end and the Port of Fernandina at the north end.

The waterfront area included in this 9-phase project stretches from the south end of City owned property to Atlantic Seafood. Included in the plans is the demolition of the existing boaters’ bath house and laundry building.  While the petanque courts will remain, the City will remove the dumpsters from their current location at the far south end.  Areas not included in this first stage include Atlantic Seafood, the boat ramp, the Marine Welcome Center/Shrimping Museum, Brett’s Waterway Cafe and existing parking.

Passero Associates Senior Project Architect Christopher Nardone provided the City’s Historic District Council (HDC) and about two dozen audience members with an overview of the work proposed for this first phase of a waterfront resiliency project at a special HDC workshop on July 15, 2021.  At their regular meeting which followed the workshop, the HDC approved the plan unanimously with a condition that Passero return to the HDC with alternative ideas for a railing design.

Nardone took questions following his presentation.  He stressed that the proposed work does not include design or construction of a waterfront park.

In reviewing the City’s application for a Certificate Of Appropriateness (COA) at the HDC meeting that followed the workshop, HDC members acknowledged the importance of this project and only raised questions about the proposed lighting and the design of the aluminum railing that would be erected for a short distance at the Atlantic Seafood end of the project.  The unpainted aluminum railing proposed incorporated a sunburst design, which the HDC rejected as not in keeping with the industrial vernacular design guidelines for the area.  Nardone agreed to bring back alternatives for the HDC to review at a future date. 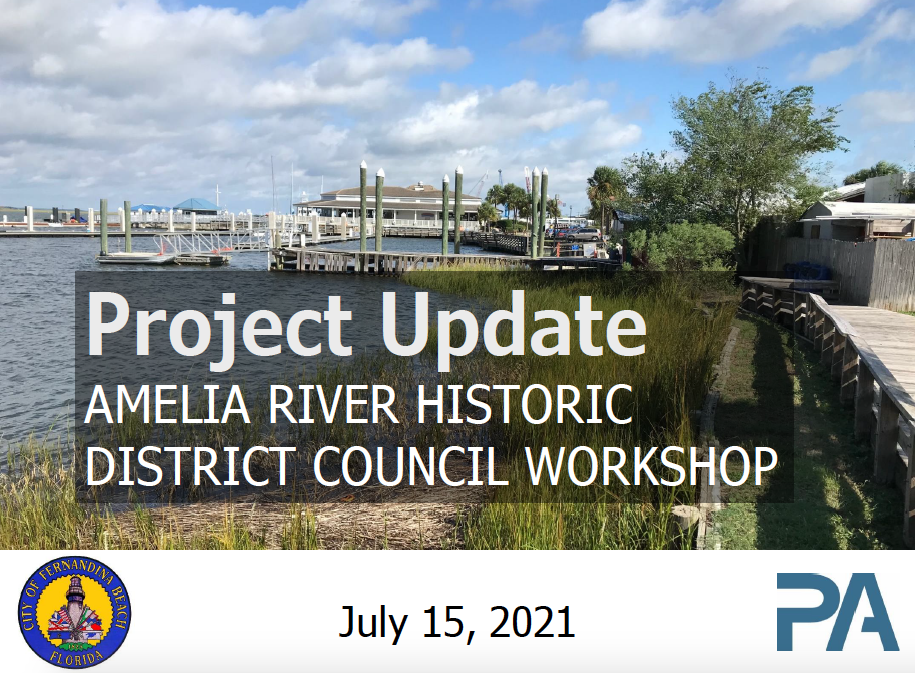 Nardone began his presentation by recapping the rationale for a waterfront resiliency project.  Benefits include:  limiting/reducing impacts from flooding, lowering flood insurance rates, improving ecological function, and reducing erosion and sedimentation.  The proposed project includes living shorelines and will stabilize the waterfront while enhancing public access, walkways and other improvements.  The resiliency project has been designed to be both attractive and low maintenance. 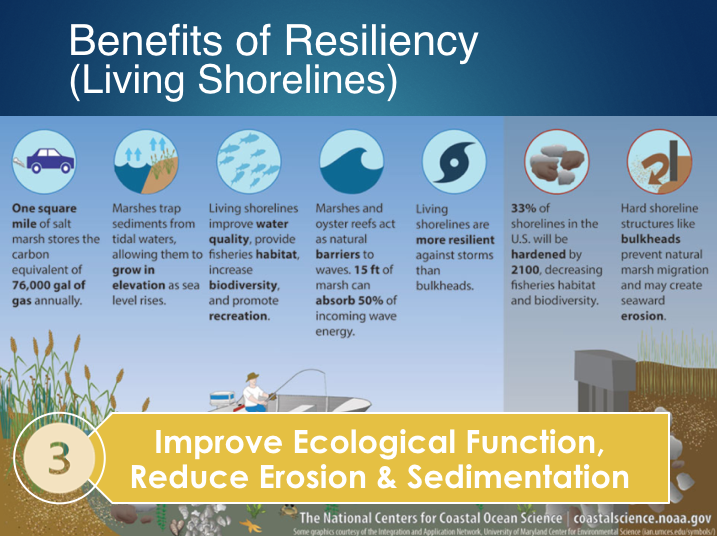 Articulated block will be used instead of rip rap to give the waterfront a more natural look. The blocks in the mudflats will be planted with grasses that will eventually grow to cover the block.  The recommended contractor will be responsible for landscaping for 3 years following the completion of construction. Bags of oyster shells will be placed in the mudflats to act as stabilization mats. 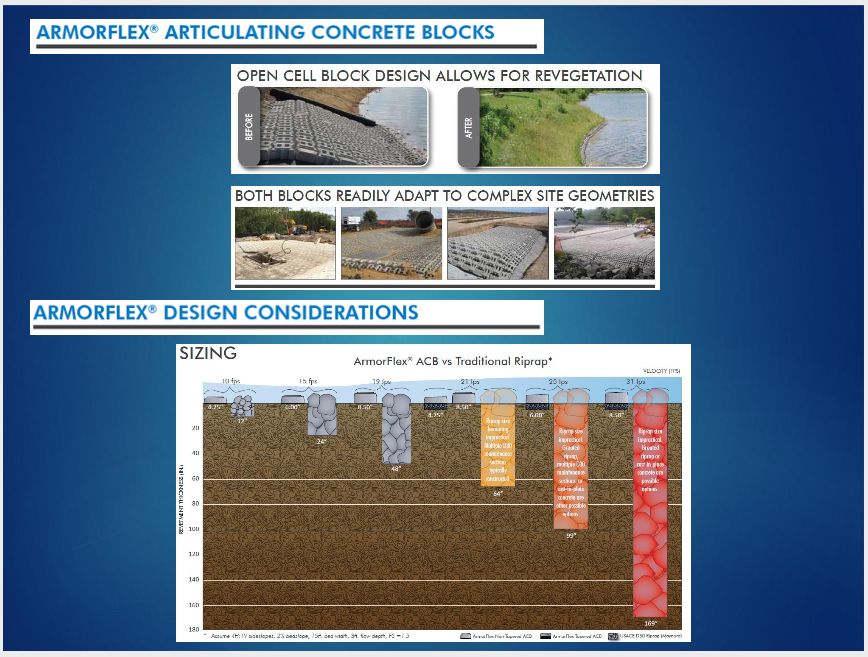 The seawall will be build of coquina concrete.   Rebar will be embedded deep in the concrete walls to prevent electrolysis from salt water.  In order to prolong the life and the effectiveness of the seawall, great care is being taken to avoid “scouring” problems both seaside and land side of the wall.  “Scour” in this sense means to form a hole in front of or behind the wall by continuous movement of waves over a long period.

Recessed lighting with turtle-friendly lamps will be used along the wall. 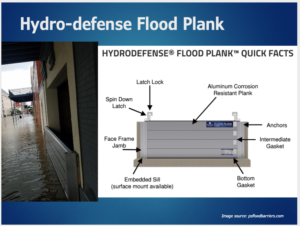 There will be four openings to the seawall, and removable hydro planking will block the openings as necessary.  Nardone allowed that the boat ramp was in good condition and would not need to be reconstructed.  In response to a question he said that the seawall along the waterfront under Brett’s Waterway Cafe had been constructed in 1938, adding that this portion was not part of the first phase of the resiliency project.

Although some HDC members wanted to discuss future phases of the resiliency plan, Chair Michael Harrison asked that members limit their deliberations to what was before them.

Nardone’s presentation consisted of 37 slides, many containing detailed engineering and construction drawings.  The entire presentation is available in PDF format via public records request to the City Clerk.

Thomas May Construction Company was the sole response to Invitation to Bid (ITB) 21-06 for the Amelia River Waterfront Stabilization of Parking Lots C & D and the bid additive of the demolition of the existing boaters lounge and bathhouse.

Based on City Staff and the City’s consultant recommendations, the City Engineer has recommended award of the construction contract of the base bid work and bid additive to Thomas May Construction Company.  The FBCC will consider this item at their July 16, 2021 Regular Meeting (Resolution 2021-110).

To allow for contingencies and miscellaneous fees during construction, City staff recommends the City Commission establish a total project construction budget for this work of $2,600,000.00.

Grant funding in the amount of $500,000 has been awarded in FY 2021/2022 from the Florida Department of Environmental Protection (FDEP), Resilience Improvement Grant (RIG) for natural living shoreline and earthen berm elements of the Thomas May Construction Company bid, and will be budgeted in FY 2021/2022 in the American Rescue Plan Act Fund Improvements account, 315 4700 56300.

Since grant money is being used in partial payment for this project, work must be completed by March 2022.