Sean Woleshin of Harden Insurance made a brief presentation to the FBCC and presented slides which showed a decline in proposed rates for the upcoming year. The City’s incumbent insurance provider is PGIT, a government-sponsored insurance trust.  This is a non-profit government insurance pool authorized by Florida Statute.  PGIT was one of two firms that responded to Harden’s RFP in seeking insurance for the City.  Woleshin said while both responses were competitive the PGIT response provided guaranteed rates for 2 years and added a million dollars of coverage for deadly weapons events. 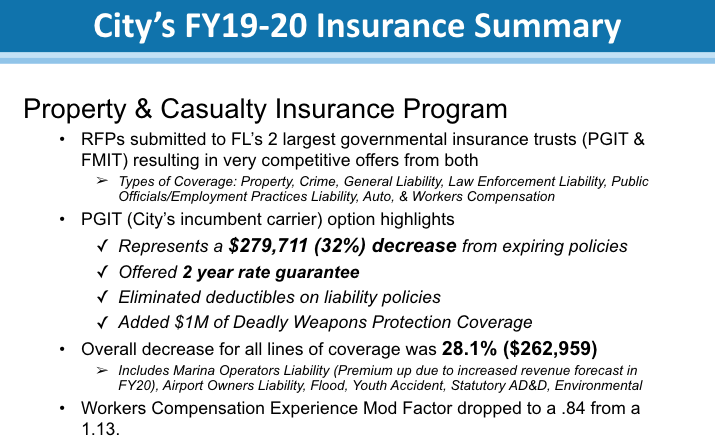 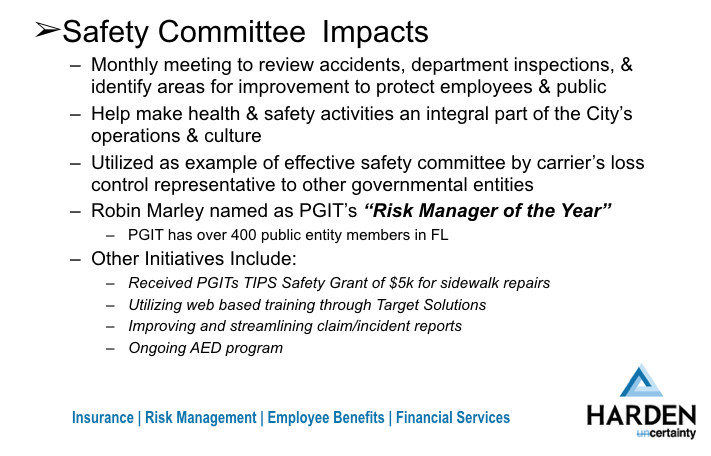 Woleshin reported that the PGIT response provided better coverage at a lower cost than the other bidder, Florida Municipal Insurance Trust (FMIT).  The only increase noted is for the City Marina.  Rates are based on anticipated income, and since the Marina will be operating again next year, its rates will go up.

He noted the drop in the rate for Workers Compensation.  He credited the work of the city’s Safety Committee, singling out Human Resources Director Robin Marley, who leads the effort.  PGIT named Marley its Risk Manager of the Year out of 400 candidates for her outstanding work in this regard.

The city received a $5,000 grant for sidewalk repairs to reduce hazards.  Woleshin cited other safety related city initiatives that have led to rate reductions as well.

Commissioner Chip Ross asked whether the City Marina would be covered in the event of future hurricane loss.  Woleshin said it is not currently covered, but it is being studied with FEMA and state representatives.  There is some debate as to whether FEMA would require insurance and set deductibles, or allow the City flexibility.  Woleshin said that preliminary indications are that such insurance would be very expensive.

Commissioner Mike Lednovich opined that acquiring insurance as Ross described is a necessity.  “We are asking for disaster to go forward with our marina uninsured,” he said.

Ross cautioned that while the matter needs to be considered, the issue of cost of hurricane insurance cannot be disregarded.  Lednovich agreed.

Vice Mayor Len Kreger asked Robin Marley to stand so that she could be recognized for her successful efforts to reduce the city’s insurance costs.  She did and received a round of applause from the audience.