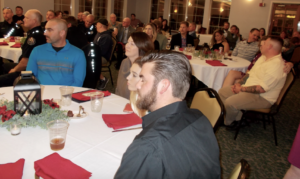 On November 9, 2019, close to a hundred people attended the annual Fernandina Beach Fire Department Awards Ceremony held at the clubhouse of the Fernandina Beach Municipal Golf Course.  Fire Chief Ty Silcox presided over the event, which was also attended by City Commissioners Phil Chapman and Chip Ross and their wives.

The Civilian Service Award was the first award presented.  Chief Silcox in presenting the award said, “It isn’t often that we have the opportunity to recognize members of the public for quick response to an emergency situation. In fact, when it comes to the 356,000 out-of-hospital sudden cardiac arrests that occur each year in the United States, bystander CPR is only initiated 39% of the time, when witnessed. Beyond that, AEDs are used by those bystanders only 6% of the time. Tonight, we have a group of citizens who were willing to do what many others would be afraid to do, to help save the life of their fellow man.”

Silcox went on to recount events of July 31, when Bill Beaumont collapsed following a run at Fort Clinch State Park.  Silcox underscored the quick thinking of Dave Broughton and Erin Mahoney for recognizing the emergency and immediately calling 911.  He next recognized Sylvia Pendleton and Zachary Martin for immediately providing CPR until B-Shift of the Fire Department could arrive on the scene minutes later.  He lauded the members of B-Shift for their high quality and early ALS care.

The Chief quoted a letter from Captain Bradley Richardson, which read in part, “Firefighter/Paramedic Collin McKee and Firefighter/Paramedic William Smith took control of patient care and continued excellent treatment. They worked well together, giving clear and calm instructions to the rest of the crew to provide the best possible care. All crew members on scene worked seamlessly to provide the best possible outcome for this patient. Their dedication to their jobs, and strong teamwork by all involved, helped turn this potentially unfortunate incident into a successful one.”

And finally he acknowledged the post-arrest care provided by Baptist Medical Center – Nassau in the patient’s survival and recovery.

Chief Silcox stressed to the audience members the vital importance of knowing how to perform   CPR.  He said, “We have a class scheduled on December 5th that you can attend. We don’t want anyone leaving here tonight without learning. You never know… you just might help save a life, like these people did.”

According to Kaleigh Simmons, Fire Department Administrative Coordinator, “We have a class scheduled on December 5th, and a class on December 8th, for $50.00 at Fire Station 1.   You can get certified in both CPR/AED and First Aid. We can also schedule classes for groups, as requested – even free one hour classes if they just want to learn without getting a certification. Interested parties can contact us at (904)310-3153 or [email protected] to register. We have twelve certified instructors; roughly one-third of our department personnel.”

Twelve year-old Luke French accepted the award on behalf of his dad, who was traveling and unaware that he was to receive an award.  In announcing the award, Chief Silcox said, “Each year, we strive to recognize a firefighter who goes above and beyond – not only completing their routine duties, but taking initiative to come up with additional, exceptional ideas and work on projects that benefit the department, and the citizens of Fernandina Beach.”

Silcox went on to cite French’s background beginning with his graduation from Fernandina Beach High School up to as recently as last month when French became a certified swift-water rescue technician.

Silcox lauded French’s calm demeanor and service ethos.  He said, “This year, French asked if he could complete a landscape beautification project at Fire Station #2. This entailed renting equipment off-duty, picking it up, and working outside on his days off. He tilled up the entire front lawn of the station, spread a layer of topsoil, and laid sod. Then he placed all of the feature plants by hand and set flowers, filling the flower beds with crushed shells. Since updating it, he has continued to ensure that the property is maintained and stays looking sharp for our citizens.”

The following individuals were recognized for their military service:

Sons of the American Revolution/Honorable Mention

Firefighter/Paramedic Michael Dowie was formerly a drill sergeant in the U.S. Army. Last year, he completed his Bachelor’s Degree in Fire Science Administration, summa cum laude. He more recently completed trainings to become a trained Live Fire Instructor, Certified Tactical Paramedic, Qualified Health & Safety Officer, and Aircraft Rescue Firefighter. Dowie has also played a role in assisting the department to further prepare for response to Active Shooter-related incidents. He is heavily involved in Civil War-era history re-enactment, as well as volunteer firefighting, and acts as training Captain for Baker County Fire-Rescue. Most notably, Dowie serves as department Honor Guard Commander. He has been instrumental in the development, training, and furtherance of our department Honor Guard over the course of the past year.

Thanks to Kaleigh Simmons for help with photos and the article.