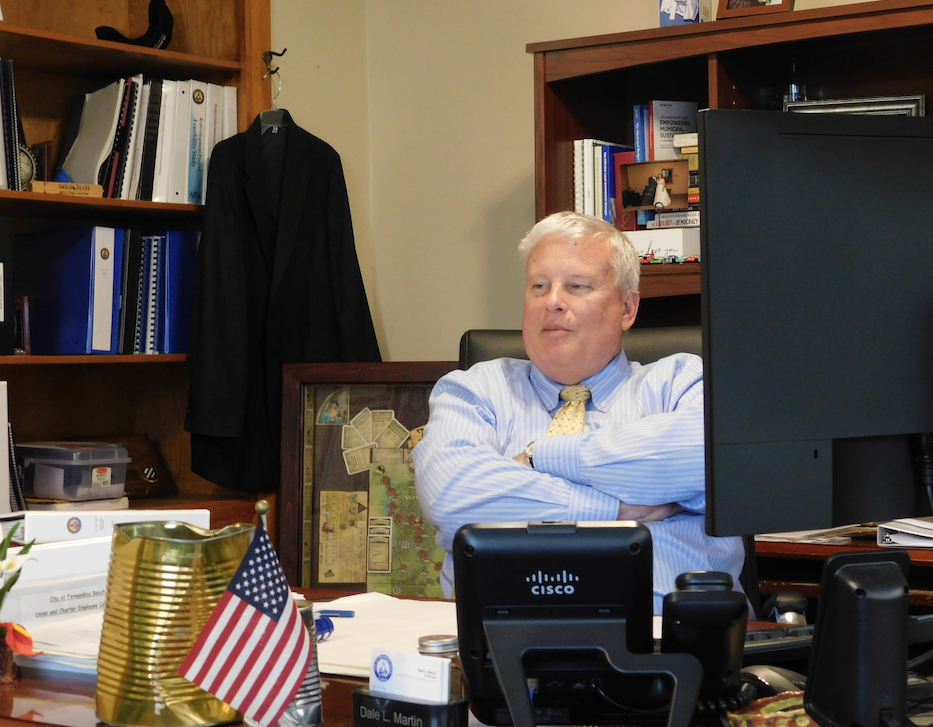 Upon entering the office of Fernandina Beach City Manager Dale Martin you can’t help but notice a couple of dented tin cans on his desk.  These are two of the proverbial cans that have been kicked down the road only to land squarely on Martin’s desk as action items.  There is also a large white board on the wall listing projects in one state of completion or another.  You get the message:  Martin’s office is mission control for the City of Fernandina Beach, Florida.

Martin has now completed six and a half years as City Manager and says he loves coming to work every day.  His tenure as City Manager is the longest the City has experienced in at least 30 years.  He is an action-oriented guy who understands that he works for five very different bosses on the City Commission as he directs staff to implement the policies and priorities established by the City Commissioners at their regular and special meetings.

On March 23, Fernandina Observer Editor Susan Steger and I sat down with Martin for an informal chat about ongoing and future plans for the City as seen through the eyes of the City Manager.  Martin has a friendly, open communication style and is justifiably proud of City staff and recent accomplishments while looking forward to upcoming challenges presented by dramatic Nassau County population growth that impacts the city, aging infrastructure and City facilities, and increasing demand for city services.

One of Martin’s goals is to provide the citizenry with a more complete understanding of the roles of both the elected governors (the City Commission) and the work of the City which he oversees.  He has worked diligently to improve communication between the City and its constituents.  He pens weekly columns that are published both in the Fernandina Observer and the News Leader in attempts to explain matters like the often-confusing City budgeting process, tax bills, progress on the Amelia Riverfront projects, the CRA, and a host of other topics.  Martin writes these columns at home so that they do not take time from his day job as City Manager.

Martin has also initiated a program called “Citizens Academy.”  Although interrupted by Covid for a couple of years, it is now back and well received by those in the community who want to learn more about City government to better understand the how’s and why’s surrounding various City operations and the decision-making process.  The current class was fully subscribed the day after it was announced.  So many people have tried to enroll in this free course that Martin has scheduled another session for the fall.  Again, he runs this program on his own time after normal City business hours.

Despite Martin’s efforts and other City efforts at improving communication (broadcasting meetings of the FBCC and the advisory boards, increased presence on social media, etc.) getting the word out continues to be a challenge.  Martin said that the City is preparing to conduct its third Citizen Survey this spring, this time available to all city residents in an online format, to once again try to determine the major issues identified by the citizenry.

Martin said, “A key challenge is that every City Commissioner wants to get as close as possible to universal support for every project. Whenever projects with generally strong City Commission and public support are prepared, relatively small numbers of detractors give the City Commission pause, and the whole process falters, leading to the accomplishment of little. Very few projects will be unanimously endorsed but the perspective of what is in the best interest of the City, as determined by the City Commission, is a critical policy decision.”

Due to political decisions over the years to keep taxes low, proper maintenance and replacement of City assets has been routinely delayed — one of those cans being kicked down the road.  Today many City facilities need major infusions of cash to bring them up to code and to continue their useful lives.  To spread the cost out over time, thereby allowing future users of these facilities to share in the cost burden, a special financing mechanism — the General Obligation Bond (GOB) — will be presented to the voters for approval this year.  The decision to take this matter to the voters is a policy decision, made by the FBCC, not the City Manager.  Martin’s job, along with the job of City Attorney Tammi Bach, will be to execute the decision, when the FBCC finalizes its decision regarding which projects and how much money will be needed to complete those projects.  Martin discussed the GOB in his Weekly Comments this past Friday.

The relationship between the FBCC and the City Manager often causes confusion for the public.  Martin said, “General direction for the Manager and City staff comes from the Commissioners.  The Manager’s job is to provide Commissioners with a variety of options to achieve community goals.”

Martin anticipates that several projects of long standing (those kicked cans again) will have been completed by mid-fall:  upgraded rail crossings at Ash and Centre Streets; the first phase of the seawall along the river.  Also, work to open the Alachua rail crossing, an unfunded priority for 40 years, will be well underway.

Martin was candid in discussing some challenges facing the City.  He lamented a lack of long-term focus on City needs and improvements by both citizens and successive Commissions. He was also highly critical of the recent Visioning Project, which Commissioners authorized to the tune of $100,000, but which has not produced the intended output.  “In my 25 years as a City Manager, this is the most frustrating project I have ever had to deal with,” he said.

The Parks and Recreation Department accounts for 17 percent of the General Fund budget and is responsible for many programs and facilities in addition to maintaining seven City parks.  The City is in the process of recruiting a new Department Director to address the many challenges faced in balancing the recreation needs of young families with those of an aging overall population.  Complicating the issue is the strain put on the services by non-city residents and island visitors, who do not pay for the services they receive from the City.  The City, Nassau County, and the Tourist Development Commission regularly wrestle with finding a fair way to allocate funds to pay for increasing service demands.

But there are many successes, too.  The newly invigorated Fernandina Harbor Marina is doing very well, both in the view of boaters and in financial terms for the City.  Even the Golf Course appears to be turning around.  Membership is up 50.4 percent over last year.

Martin remains positive about the City and making progress toward meeting Commission goals.  “Things are moving forward.  This has been a good year with finally receiving compensation from FEMA for damage to the south basin of the marina during Hurricane Matthew in 2016.  City departments are working much more collaboratively to provide services.  We are about to break ground on a new fire station at the airport.  The Isle de Mai drainage issues are being addressed.  We have a citizen-generated plan to address our beach accesses.  We are finally starting to see improvements in the CRA.,” he said.

“This has been a good year, and the City will have a very busy summer,” Martin said.

The chart below presents the City Goals set by the Fernandina Beach City Commission at their annual Strategic Planning Workshop in January: 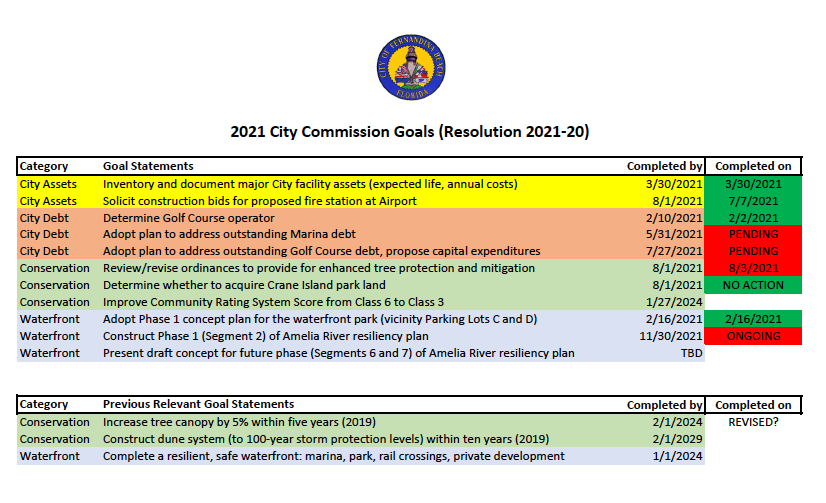 Due to political decisions over the years to keep taxes low, proper maintenance and replacement of City assets has been routinely delayed — one of those cans being kicked down the road. Today many City facilities need major infusions of cash to bring them up to code and to continue their useful lives.

Eventually, we all have to pay for delayed decisions……and that cost will often skyrocket! Keeping up with improvements and maintenance through small tax increases and prudent spending of those tax revenues is far preferrable to watching the hole get deeper. “No new taxes” sounds nice but it is totally unrealistic to think we can even tread water in this City with that pledge.

Thank you Suanne and Susan for a highly informative and frank article about the issues the City faces.

I really believe that the increase in memberships at the golf course is due ONLY to the exhaustive efforts of Mike Cooney and Bllaine Elerbe and NOT to your efforts by any means. The City has squandered grant money awarded from various sources to the detriment of the golf course. To improve the golf course takes proper planning, superior golf course management, and proper execution without political interference. You have demonstrated a severe lack of effective management skills with respect to the golf course and you continue to hold the golf course hostage with a veiled attempt to care.