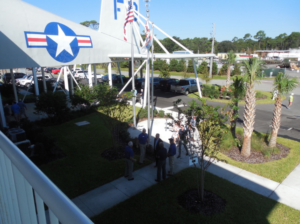 It was a perfect day to dedicate the new Fernandina Beach FL Municipal Airport terminal.  About 200-300 people attended the formal ceremony on October 13, 2018 under clear and sunny skies.  Suddenly cooler temperatures and a slight breeze helped visitors and guests more fully enjoy the day’s activities as they visited the new building, toured aircraft on the field and listened to city, state and U.S. Navy speakers extend gratitude to everyone who helped bring the project to fruition.

The open house and dedication day events were scheduled to run from 11:00 a.m. to 2:00 p.m. and featured family friendly events, live music, skydiving, hamburgers and hotdogs, and free plane rides.

The star of the event was the new terminal building, which replaced an aging trailer and a hurricane damaged building that had previously housed the city’s airport operations and the former FBO.

The terminal design, which suggests the Navy’s F4U Corsair aircraft, has been the source of both pride and controversy for the community.  The airport’s history harkens back to World War II, when it was used as a Navy training facility for Corsair pilots.  The citizen design committee selected the plan as a way to honor the city’s past and its Navy connection and to make the airport stand out among other regional general aviation airports.  The cost of the building – approximately $4.8M – has been paid via government grants and the Airport Enterprise Fund.

Despite persistent rumors to the contrary, no tax dollars have gone into the project.  The Airport Enterprise Fund is funded by airport user fees. Bent Wing Flight Services, the airport’s fixed base operator (FBO), contributed significantly to building upgrades and pays rent to the city to operate from the terminal building.

Fernandina Beach City Manager Dale Martin emceed the dedication event, which was held under the building’s “starboard wing.”  He recognized all the parties that had played a role in the design, building and funding of the terminal, ranging from citizen committees to government officials and agencies.  The city’s Airport Advisory Commission and the local Friends of Fernandina Aviation were also contributors to the success of the project.  He thanked Passero Associates, the city’s airport consultant, and F&G Construction, for delivering the final product.  He acknowledged the contributions of Bent Wing Flight Services FBO. 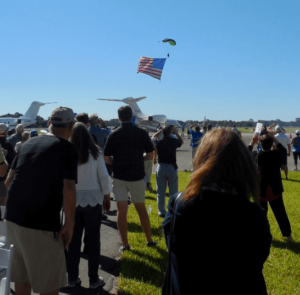 Martin also recognized the Navy Band Combo that performed for the visitors and played the National Anthem as the American Flag was parachuted down onto the middle of the airfield.

Fernandina Beach Mayor John Miller thanked and singled out the current and past city commissioners in attendance who had served during the course of the project’s inception, design and delivery beginning in 2012.

State Senator Aaron Bean added his gratitude to those responsible for the project.  Bean, who was born and grew up in Fernandina Beach, also served as mayor previously.  He expressed his belief that the new terminal will be an important part of the legacy of this generation to future generations, just as today’s residents enjoy the legacy of the earlier city commission that invested in the Atlantic Avenue Recreation Center in the 1950’s.  Bean reminded the audience that the building will also serve as an after hurricane response center for the island.  He relayed comments from state agencies that are both pleased with the final product and that look to see the state and the community reap economic benefits from the unique terminal design.

Bean ended by congratulating the U.S. Navy on its 243rdbirthday.

Captain Michael Connor, Commanding Officer Naval Air Station Jacksonville, offered his congratulations along with a brief history of the Navy in Florida and the contributions of the F4U Corsair to the World War II fighting effort.  He expressed the Navy’s pride in service to northeast Florida.

Mayor John Miller wielded the giant scissors to officially open the facility to the public as elected officials and community leaders looked on.

Crowds continued to build following the ceremony, with many heading for the refreshments while others were drawn to the variety of aircraft on display on the airfield.

Throughout the morning, aircraft landed and were serviced by Bent Wing FBO.  According to Brian Echard, FBO manager, fuel sales are up even though he has only been operating a short time and pilots have not yet had an opportunity to get full use of the new terminal and facilities

Airport Manager Nathan Coyle and Kathryn Echard, who along with husband Brian Echard owns and manages Bent Wing Flight Services (FBO) greeted VIP guests and dedication event sponsors on the building’s observation deck.  The observation deck provides a commanding view of the airfield and is open to the public during the airport’s business hours.  Coyle explained a bit about the development and evolution of the terminal and that it is roughly divided in two, with the city occupying one half of the building and the FBO occupying the other half.

Leaving the observation deck, the tour proceeded into a large conference room before reaching the second level of the atrium.  Echard explained that the model of the F4U Corsair, which is suspended from the ceiling, was only now being installed because of travel difficulties relating to Hurricane Michael.  The crew had worked all night attempting to repair travel-related damage and to properly mount the detailed model.  The model, commissioned by the Echards at a cost of more than $70,000, is just one of the many interesting touches added by the FBO operator at no cost to the city or the airport fund.

The ground floor of the atrium, accessible from the parking lot or the airfield, contains both static and electronic exhibits in addition to a service desk, car rental counter, gift shop and canteen.  There is also a pilot’s lounge (complete with a massage chair), a smaller conference room, and a chart room that pilots may use to plot their flights.

Both the city and the FBO have offices that include state of the art electronics to monitor airport activities and conditions.

Terminal as a special event venue

The public areas of the airport terminal may be rented out for special events.  Mercedes Benz has already booked the first major event for November.

Any organized activity involving the use of, or having impact upon, public property, public facilities, parks, beaches, sidewalks, street areas, or the temporary use of private property in a manner that varies from its current land use, may require a permit. For complete information Contact Special Events Coordinator Mary Hamburg (904) [email protected]

Special Event Permit Applications must be received by the City of Fernandina Beach Public Information Officer no later than 60 days prior to the actual date of the event and may be submitted as early as one year before the event.

The public is welcome to visit the new terminal and the observation deck during normal business hours.

For more information about the history of the Fernandina Beach Airport, the design and funding of the new terminal, use the search function on the Fernandina Observer website. There you will find extensive coverage of the City Commission debates and votes on the project over recent years in addition to detailed history of the airport since its early days as a Navy training facility.