“Parks are supposed to be places of great joy.”
Quote from an audience member 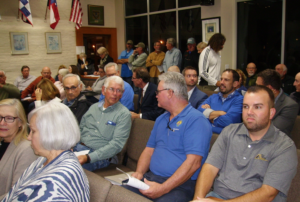 The Fernandina Beach City Commission (FBCC) at their November 19, 2019 Regular Meeting approved Resolution 2019-189 (Simmons Park Plan) on a 3-2 vote following more than three hours of presentations, public input, and discussion.  The vote did not sit well with the audience which overwhelmingly opposed the revised plan.  Tempers flared between commissioners on opposing sides of the vote. The language of the Resolution, which was prepared prior to the November meeting of the Parks and Recreation Committee (PRAC) failed to reflect that committee’s vote to nullify its prior approval of the park plan on a 4-1 vote.

The proposed Simmons Road Park was originally conceived in 2018 as part of a State grant application, in part to address the identified lack of recreation facilities in the southern portion of the City.

According to 8 Flags project architect Benjamin Morrison, the City approached 8 Flags Playscapes with an offer to partner on the development of the Simmons Road Park.  In his statement before the FBCC, Morrison said, “After discussing it at length, we decided that it checked every single box for us. We felt like it was truly an opportunity to make a positive impact in our community, and a meaningful step towards making Fernandina Beach the most accessible community in Florida. To create a universally accessible Nature Park, something that does not currently exist in the community, could make a significant impact on the lives of so many in our city and beyond. Further, when Project Chance approached us to partner and provide their expertise and financial resources, we knew this was a worthwhile endeavor. Not only could we partner with the City to make sure accessibility remains a top priority, but we could also offer around $100,000 in funding and services to help make it a reality. Truly a win-win for everyone involved.”

Project Chance is a not-for-profit organization dedicated to aiding children diagnosed with autism and other developmental disabilities.

With an understanding that the city would partner with them in the Simmons Road Park Project, 8 Flags Playscapes, which had contributed to the development of Pirate’s Playground and Egans Creek Park, had designs prepared by Gillette & Associates.  Also, the Parks and Recreation Department began purchasing equipment for the park, which had not yet been vetted by the Parks and Recreation Advisory Committee and/or approved by the FBCC.

PRAC met on October 8, 2019, and by a 4-1 vote recommended to the City Commission approval of the design for the proposed park. However, at their November 12, 2019 meeting, after having considered public input and concluded that more information was needed prior to formal consideration by the FBCC, the PRAC then voted 4-1 to withdraw their prior approval.

The item is presented.

Parks and Recreation Department Director Nan Voit introduced the item to the FBCC at their November 19 meeting by recapping events in the approval and development process for the current plan.  Representatives of Eight Flags Playscapes joined her and provided plans for the proposed park showing reductions in tree loss and size of the pavilion from their initial submission.  Commissioner Mike Lednovich followed their presentations with a 60-plus slide presentation of his own, lasting about an hour and plagued with technical difficulties that prevented him from showing video clips of PRAC meetings during which the park plans were discussed.

Lednovich’s presentation highlighted what he termed “process failures” that occurred as the original concept for a low impact nature park morphed into plans for a more developed park to include an accessible playground and nature trail in a heavily wooded 6-acre parcel.  He said that promised public meetings to seek input from surrounding neighborhoods were either not held or not documented.  He cited several instances from PRAC meetings where PRAC members did not seem to be in the information loop on park developments.

Lednovich pointed to other parcels that could be used for a handicapped accessible playground.  He cited serious concerns about the impact of the park as currently presented on island wildlife.  He also questioned why the city would be allowing 69 trees to be cut down on city-owned property when the FBCC had just approved a half-mill tax increase to allow the purchase of environmentally sensitive lands for conservation and tree protection.

Earlier in the meeting Morrison had said, “We are aware that others in the community have proposed alternate locations that they say can provide a similar opportunity for development with less environmental impact. We are familiar with these sites, and have considered the feasibility of whether they offer an opportunity that we feel fits the goals of our organization and of the individuals and organizations that support our endeavors.  An airport location, including the soccer fields, does not offer the calm environment necessary for a playground to be considered universally accessible. The golf course is significantly more complex than presented and a retention pond location next to a busy parking lot presents many challenges and is not conducive to a calm environment.  We are supporters of the River to Sea Trail, but it too does not offer the amenities that the Simmons Road Park site offers, and should not be referenced as a baseline for accessibility in the community.  We can say with certainty that these locations do not offer what is possible with the Simmons Road Park location. It is because of this that 8 Flags Playscapes is 100% committed to this project as well as the location as presented this evening.”

Morrison said that the playground has been designed on a Timucuan Indian theme.

Prior to the FBCC’s vote on the Resolution, 21 members of the public addressed the FBCC with their concerns.  The theme that pervaded their comments was the apparent lack of process and transparency in changing the original, FBCC-approved concept from a nature preserve with a couple of parking spaces and a bathroom to a full blown park with an accessible playground and a nature trail that would require the removal of 69 trees.

Speakers, most of whom were city residents, urged commissioners to postpone consideration of the park until a compromise could be worked out or another location could be found for the playground so that the original concept for the Simmons Road Park could proceed. While speakers for the most part were calm and respectful, there was no doubt that they were both confused and disappointed at what appeared to be a breakdown in approval process for a new city park.  They cited the FBCC’s ignoring the latest advice of the PRAC (approved on a 4-1 vote), which recommended that the FBCC not consider the current proposal until PRAC could further study and evaluate the current plan.  Several speakers suggested that the city should focus on improving existing parks, especially restroom maintenance, before adding to existing maintenance woes with a new park.  Some expressed frustration over the “us vs. them” attitude when it comes to allowing non-city residents to use city facilities.

“Simmons Park has become the city’s Brexit.  Why don’t we just start over?”

“The city approval process is broken; the right hand doesn’t know what the left hand is doing, and there is no guidance provided to PRAC.”

“What’s the rush?  Both sides have good intentions.”

“You ask citizens to get involved, and then you ignore what they have to say.  This government is not serving the people.”

One resident, who spoke at the end of public discussion, expressed exasperation with the FBCC and the audience.  “Fernandina Beach is better than this.”  He went on to say that he was put off by the criticism being directed at “people who are trying to do good.”

There were several instances of less than civil discourse.  Commissioners sniped at each other; audience members talked in low tones among themselves during the FBCC’s discussion, disparaging both commissioners and city staff.  One speaker made not-so-veiled accusations against commissioners for displaying disrespectful attitudes and behavior toward those who disagreed with them.  He was challenged by Mayor John Miller, who was under the weather and took offense at the comments.  Commissioner Phil Chapman also challenged the speaker.

Ideas and suggestions were put forward, including: 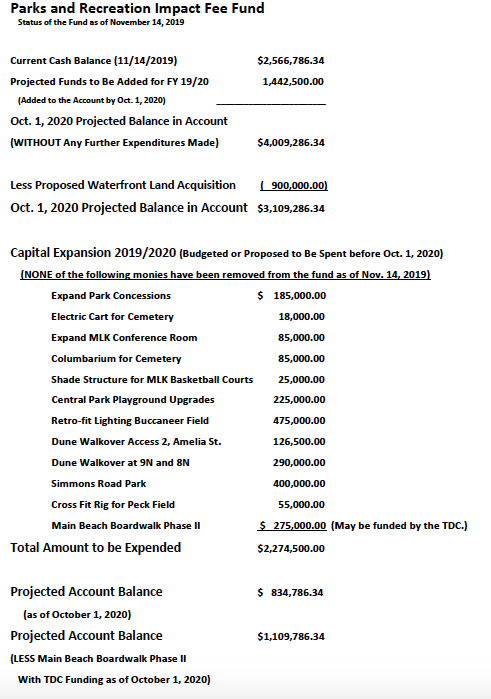 Commissioner Chip Ross, who had earlier listed all the approved projects which are looking for funding from Parks and Recreation Impact Fees on the city’s Five Year Capital Improvement Plan, urged caution in proceeding with the Simmons Road Park at this time.  He reminded commissioners that the FBCC’s priority has been to construct a waterfront park downtown.  As development opportunities disappear, less and less money will be collected in impact fees.  He believed that existing funds must remain available for the waterfront park.

Vice Mayor Len Kreger argued that because impact fees are collected from new development, they should be spent to provide amenities in the neighborhoods that have generated the revenues.  The residential growth in the city is toward the south, including the Simmons Road  area.  He declared that the proposed project is a legal expenditure of impact fees, consistent with the Comprehensive Plan and the Parks Master Plan.  He supported the plan.

Commissioner Phil Chapman, a strong advocate for handicapped access to all areas of the city, made an impassioned speech on the problems facing disabled people in the course of a normal day.  He reminded commissioners that one of their goals was to be the most handicapped accessible city in the state.

Mayor John Miller also supported the plan, expressing confidence in 8 Flags Playscapes based upon their work partnering with the city on two earlier projects:  Pirates Playground and Egans Creek Park.

When the vote was taken the Resolution was approved without an accompanying plan by three commissioners:  Chapman, Kreger and Miller.  In opposing the motion, Ross indicated that he wanted to see the item postponed until questions could be answered.  Lednovich also opposed the resolution out of process and conservation concerns.

Following the vote outcome which was not unexpected, several audience members directed loud, critical comments toward the FBCC before storming out of the chamber.

The motion that was finally approved called for a timetable to be presented to the FBCC in December.  Additionally, City Manager Dale Martin today said that there will not be any construction work initiated until points raised during the meeting can be fully addressed and clarified by the appropriate city staff.

CORRECTION:  Nan Voit has clarified that she proceeded to purchase equipment for the Simmons Road Park because the  FBCC had approved both the concept and the $400K budget.  There was always an intent for a playground in the park.  She also said that she, not 8 Flags Playscapes, obtained the surveys.