The Fernandina Beach City Commission (FBCC) met for 3.5 hours on September 1, 2020.  Despite other major issues such as possibly switching marina operators and awarding the contract to build TopTracer at the City Golf Course, most of the discussion throughout the meeting centered on beach related issues.

The City of Fernandina Beach has 48 beach accesses, which enable residents within walking distance of the ocean to enjoy the beaches without having to drive there.  Just a short walk from their house or development lies a strand of white sand and surf.

But the nature of the city’s beach accesses varies greatly, with some mere pathways and others complex wooden structures with associated parking areas.

Dune management, an important component of beach preservation, has been made a priority by the Army Corps of Engineers (ACE), as part of beach renourishment.  ACE has stressed the need to eliminate breaches in the dunes, which could lead to extreme flooding in the event of major storms.  Where beach walkovers and access paths are needed, ACE would like to see them run parallel to the shore, not perpendicular as they currently sit.

At times it appears that the twin goals of beach access and dune management are in conflict.  That conflict arose again at the September 1, 2020 FBCC meeting over the question of submitting a CPI grant application to construct a beach walkover to replace a beach walk through at Beach Access 6 North.

According to City Staff, the total cost of the new Beach Walkover is estimated at $137,280 at $660 a lineal foot using composite material for the deck. $60,000 will be provided through the grant and the remaining $77,289 will be provided by the City Parks and Recreation Impact Fees (Capital Expansion Fund Dune Walkovers account, 310 56315), thereby providing in excess of the 1:1 matching requirement of the Coastal Partnership Initiative (CPI) grant.

The Coastal Partnership Initiative grant program was developed to protect and effectively manage, at the local level, Florida’s coastal resources. Eligible entities may apply for grants for community projects such as habitat restoration, park planning and improvements, waterfront revitalization and improving communities’ resiliency to coastal hazards.

There had been debate among Commissioners as to whether the City should apply for this grant to support riverfront shoreline stabilization efforts or the beaches.  Vice Mayor Len Kreger made a presentation showing that the City has a good record for receiving and completing grants to protect beaches, but that state-funded stormwater resiliency grants have not been used.  He claimed that this track record would work against the City in seeking the current CPI grant for waterfront resiliency improvement along the river.  He presented the information below: 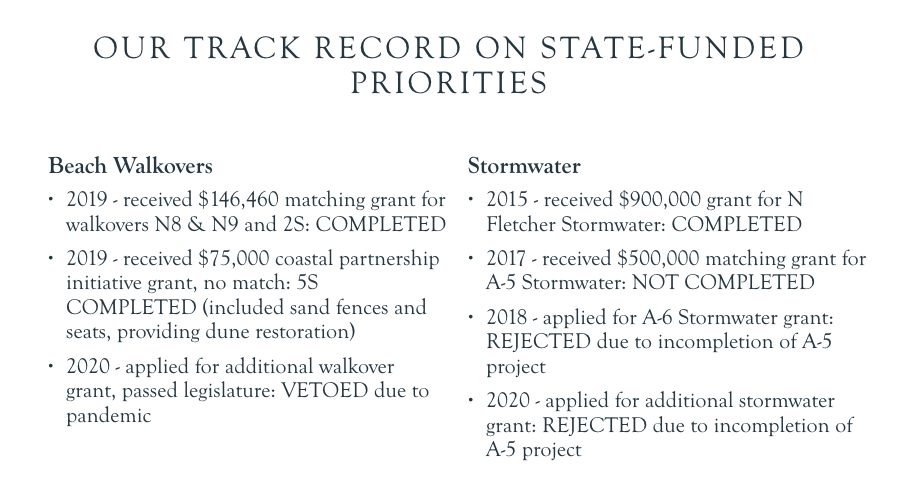 Kreger, who has assumed the role of beach watchdog, worked with City Grants Officer Lorelei Jacobs to complete the paperwork requirements for the grant.  In an email, he provided information on the request and asked the City Manager to forward his findings in exploring both the need for and the costs to the other Commissioners.

In his email Kreger explained that the grant would be used to construct a 112 foot walkover, to an approximate 8 foot elevation to clear the frontal dune, a 90 degree turn to the beach and ramping 96 feet to the beach. The walkover would start at grade on Ocean Avenue. This plan meets ADA requirements. It would require a dedicated parking space (s) on Ocean Avenue.

Although the request to submit this grant request ultimately passed on a 3-2 vote (Commissioners Mike Lednovich and Chip Ross dissenting), it was not without discussion.  Kreger’s proposal would require cutting through a stone revetment placed in that area after Hurricane Dora to prevent flooding along Ocean Avenue, where the dune is at a weak point due to the construction of the jetties.  Some believe that such a move would be illegal, thereby causing the grant request to be rejected.

Commissioner Mike Lednovich invited Frank Hopf, an island resident who is the co-founder and science director for Dune Science Group, LLC (DSG), to present an alternative plan to the FBCC.  Hopf has spoken many times to local groups and gatherings about the need to enhance and protect dunes and beaches through natural and nature based methods.  Hopf identified the problem as follows: 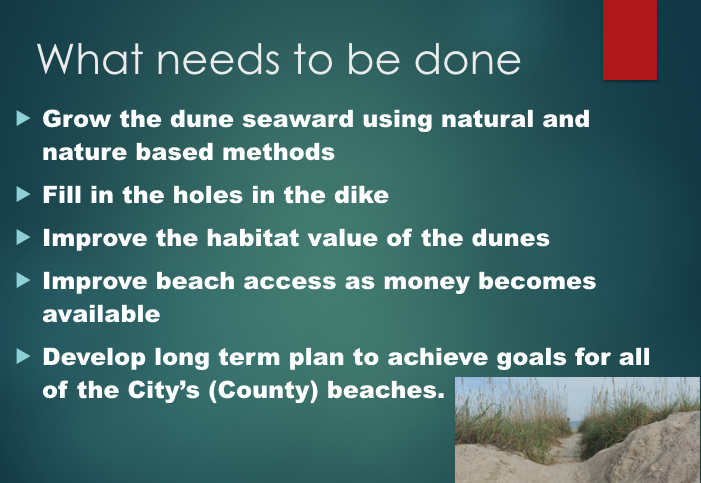 With the aid of a multi-slide presentation, Hopf explained that the dune off Ocean Avenue could be protected and renourished for a cost of approvximately $2,500 by adding snow fencing, replenishing rock in the revetment beneath the sand, and adding appropriate plants. The work would rely heavily on volunteer labor.  Because all the work would be done within existing City beach accesses, there would not be a need for permission from private property owners to conduct these activities. 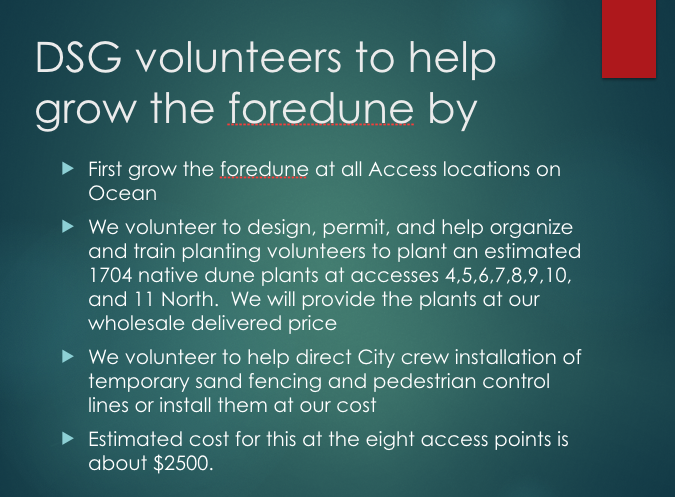 Ms. Bryn Byron of 1438 S. Fletcher Street addressed the FBCC from the audience.  She cited the efficacy of DSG’s work on her property and agreed to donate $2,500 so that the work could also be conducted on the Ocean Avenue dune.  She also agreed to work to attract volunteers to help with the project.

Call for a Dune Management Plan

Commissioner Chip Ross stressed the need for a dune management plan, disagreeing with Vice Mayor Len Kreger who said that ACE had already provided one.  Ross agreed that ACE had provided a series of recommendations to include dune protection.  However, he said that there had not been follow through to develop priorities, costs and budgets.  He suggested that in light of what could amount to as much as $9.7M to repair or rebuild existing beach walkovers and walkthroughs, a citizens committee should be formed to tackle the issue.  Again, Frank Hopf made a suggestion: 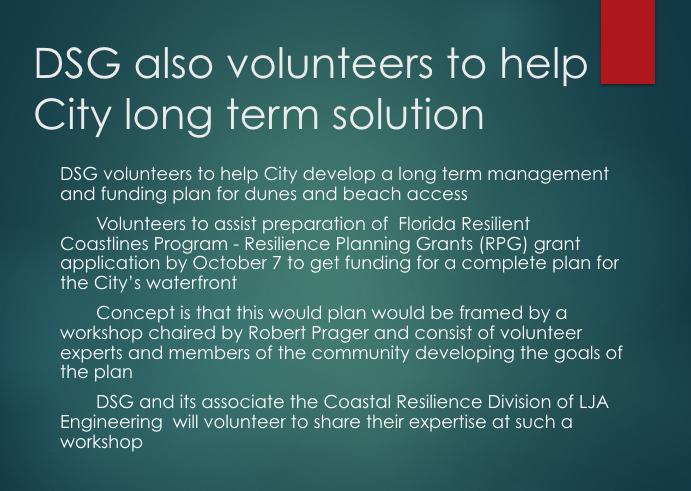 Ms. Genece Minshew, a candidate for City Commission, raised the ongoing issues with Beach Access 40.  She presented a video showing the deep ruts in the pathway and the poor quality fill dirt that had been used in constructing tha access.  City Attorney Tammi Bach said that in light of the City’s liability resulting from the condition of Beach Access 40, it would be closed immediately until it could be repaired to a safe state.  Solving the problem has apparently been caught between two City Departments:  Parks and Recreation; and Stormwater.  City Manager Dale Martin had directed Parks and Recreation to handle the matter, pulling upon help from other departments as needed.

Martin reported that as of this morning (September 2) Beach Access 40 has been closed for safety reasons.  He added that upon investigation, the problem arose from decisions made to eliminate stormwater measures for cost reasons when the parking lot was initially constructed.

Following the FBCC discussion it is not clear how the City will proceed to develop a dune management plan.