In what is perhaps the most significant policy reversal since the new Fernandina Beach City Commission (FBCC) took office in December 2020, the FBCC voted 4-1 to abandon legal efforts to acquire what is known as the O’Steen – Simmons property along the Amelia Riverfront. The effort to reverse course was initiated by Commissioner Bradley Bean and quickly endorsed by Commissioner David Sturges at the June 15, 2021 Regular FBCC Meeting. Vice Mayor Len Kreger and Mayor Mike Lednovich added their support, leaving Commissioner Chip Ross as the only Commissioner to support continued legal efforts to obtain the parcel from unwilling sellers in order to complete the footprint for the long-promised waterfront park.

On August 6, 2019, the FBCC unanimously approved Resolution 2019-129 which authorized the City Attorney and the City Manager to utilize the services of Jacobs Sholz & Wyler LLC to represent the city in an eminent domain action to acquire certain property along North Front Street (Parcel # 00-00-31-1760-0001-0020) necessary to complete the proposed waterfront park.

“Eminent domain” is defined as the power to take private property for public use by a state, municipality, or private person or corporation authorized to exercise functions of public character, following the payment of just compensation to the owner of that property.

According to the Nassau County Property Appraiser, this vacant, industrial zoned parcel consists of 0.71 acres. Its 2020 market value is listed as $756,240. It is located along Front Street between two City-owned land parcels.

Prior to initiating legal action to obtain the property, which was deemed essential to many actions connected to building a waterfront park, the City had obtained an estimate of $800K to purchase the property. The offer was rejected by property owners, even after the City agreed to raise the estimated purchase price. Legal discussions continued and culminated in mediation.

On January 22, 2021, the City attended mediation with counsel and Mr. Richard S. Simmons in the eminent domain case, City of Fernandina Beach v. The O’Steen Company et al. Case No.: 2020-CA-000146 in the Fourth Judicial Circuit for Nassau County, Florida. 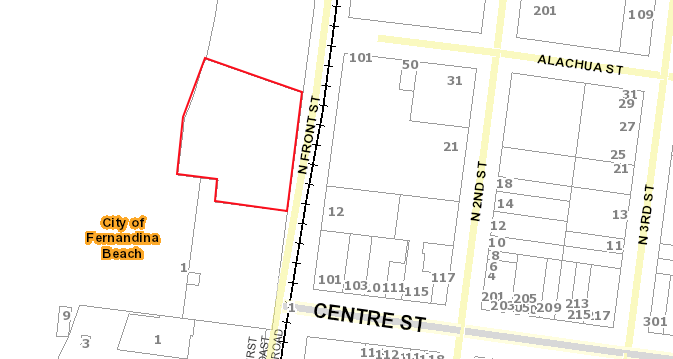 The appraisal completed by Diskin Property Research, a Tallahassee firm selected by the property owners, valued the property at $2.3M. The City believed the estimate to be flawed in a number of ways, including that the appraiser used submerged lands in valuing the total square footage of developable property. Counsel and staff believed it was not in the best interests of the citizens of Fernandina Beach to agree to settle this eminent domain case in an amount that seemed “wildly inflated and is based upon flawed analysis and data.”

At the June 15, 2021 FBCC meeting, City staff recommended rejecting what they termed as a “flawed valuation” and seeking another evaluation. While all commissioners agreed to reject the proposed settlement offer, the question of proceeding with eminent domain action arose.

Bean and Sturges, in addition to voicing opposition to taking property from unwilling sellers by eminent domain action, expressed hope that continued discussion with the property owners would be fruitful, thereby permitting planned roadwork along Front Street and a seawall to continue through the property in question. Ross maintains that given that the City has already engaged with the property owners in months of discussions, such optimism is unfounded. Further, he believes that with the action of the FBCC, plans for a waterfront park have been effectively killed.

Once again, the future and plans for a waterfront park must be revisited in light of policy reversals by elected officials.

That is a very positive step. I’m glad to see the two newer commissioners step up to the plate. Thank you.

This action was flawed from the start and good that it has ended. The original 2012 waterfront plans NEVER looked at property north of the existing marina boundary so for Comm. Ross says this kills the waterfront park plan might be a convenient excuse, it has no validity. The acquisition of the Front Street Glad (Vuturo) property to the north of the Simmons property was done in order to acquire the riparian rights that would allow the marina slips to be relocated from the southern side to the northern side. Currently the property has a market value of $756,000 according to the County’s Property Appraiser. Perhaps Mr. Hickox should take note of the submitted appraisal value of $2.3 million and make some adjustments of property values along the riverfront!

Thank you Commissioners Bean and Sturges for your stand on this and to Commissioners Kreger and Lednovich for jumping on board! It is no surprise that Ross wanted to go forward with such a flawed move. He’s all for legal action even when we see how much he’s failed with such moves.

Yes Marlene, Chip Ross loves legal action for everything, especially when he’s not footing the bill.

The tall curbs on the east side of Front Street were r...
wpDiscuz
4
0
Would love your thoughts, please comment.x
()
x
| Reply
Comment Author Info