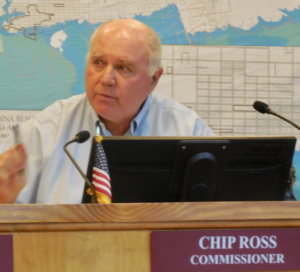 A city always seems to have more needs for revenue. During the June 15, 2021 Fernandina Beach City Commission (FBCC) Workshop, Commissioner Chip Ross tried to enlist other commissioners in identifying untapped revenue sources that could be factored into the FY 2021-22 Budget development for the City of Fernandina Beach.

Ross said that in the ten years he has lived in Fernandina Beach, he has observed that Commissions are “very good at spending money, but what they never talk about is how to raise the money.”

“I believe that the path that we are currently on is not sustainable,” Ross said. “We keep adding new things, but we keep revenue flat. … We are already running out of money because we are not funding infrastructure needs. If we keep funding flat — and I am not talking about raising taxes — we cannot keep up with inflation. We have contractual obligations to raise Police and Fire/EMS salaries 4-5 percent each year. Eighty percent of the City’s general fund goes to pay salaries, so that is a chunk of money. As our population grows, we are required to provide more services to more people.”

He noted that in 2020 the half-milll increase was adopted to fund conservation, and was eliminated after a year.

In a presentation entitled “Concentrate on longterm financial sustainability,” he identified needs to repair, replace or rehabilitate city assets:

He also noted the need for a new fire station to serve the growing south end of the City and the airport.

He followed by listing a series of suggestions often raised by residents as ways to increase revenue — and explained why such suggestions could not be implemented:

Ross then cited new projects that have been supported by one or more City Commissioner as well as citizens:

Vice Mayor Len Kreger raised the Capital Improvement Plan (CIP) as the means for prioritizing and funding needs such as those Ross identified. Kreger went on to note funding needs for shore stabilization, which is not currently on the CIP. “At some point,” Kreger said, “we are going to have to look at bonding [to obtain the revenue to take care of the City’s capital needs].”

Mayor Mike Lednovich expressed surprise that the waterfront park was not on the list of needs.

Ross said that he would like Commissioners to bring up a source of funding for implementation and annual maintenance costs each time a new project is proposed.

Commissioner Bradley Bean disagreed that City revenue is remaining flat. “Even if we went to the rollback rate for the new budget, our tax revenue would increase $280,000.” He called for Commissioners to prioritize the projects on the list Ross presented. “That’s how you don’t raise taxes and have a balanced budget,” he said.

Commissioner David Sturges said that another story circulating in the public is that the City has been bloating its staff. He said, “Adding 4-6 employees over 6 years does not amount to ‘bloating City staff.’”

Ross then presented a list of possible sources of new revenue to meet the City’s needs:

There was not majority interest in pursuing increasing FPU franchise fees, paid beach parking, or increasing the size of the CRA.

With respect to property taxes, Ross presented three scenarios, each of which would affect the amount of money available to address City needs. He proposed that the FBCC maintain the current millage rate and use the difference between that rate and the rollback rate for infrastructure rehabilitation.  If instead the FBCC adopts the rollback rate, there will be a million dollar shortfall in new revenue; adopting the adjusted rollback rate will cause a $400K revenue shortfall.

It should be noted that the Board of Nassau County Commissioners (BOCC) maintained the same tax rate in FY 2020-21 as it had in FY 2019-20 and did not adopt the rollback rate. County Manager Taco Pope announced at the recent Joint Local Planning Agency meeting that he will not propose the rollback rate, but will present the BOCC with a budget that recommends retaining the current millage rate for the new budget year.