“You can’t always get what you want.”  More than just the title to a Rolling Stones song, this is the phrase being echoed around the state, the county and the City of Fernandina Beach as budget discussions get underway for the 2021-22 Fiscal Year, which begins October 1, 2021.

Elected representatives and government staff are trying to balance the electorate’s desire for low taxes and fees against needs to maintain, modernize and replace infrastructure while providing salaries and benefits that will ensure that capable people continue to work for local government to keep the public safe and healthy.  Anyone who thinks such a task is easy — or that it can be done without pain — lives in the world of tweets and sound bites.

The City of Fernandina Beach is no exception.  Commissioners have already announced that they support the rollback rate for property taxes next year.  The question is how can that happen when there are so many needs in the city and often competing wants of the electorate?

Commissioner Chip Ross has routinely focused Fernandina Beach City Commissioners (FBCC) on the cost of projects and services they are proposing for the City.  At the March 16, 2021 FBCC Workshop, he focused on all the needs identified by just one City Department:  the Parks and Recreation Department (PARD).  This department comprises almost 18 percent of the City budget.

“Our City has more parks and recreation facilities and programs than the entire County,” Ross said.  “We have much more than any other City our size in Florida.”

In compiling his list, Ross used the current adopted 5-Year Capital Plan, the Draft proposed plan for the upcoming fiscal year, the strategic summary presented to the FBCC by PARD Director Nan Voit, and capital improvement projects listed on the March 9, 2021 FBCC agenda.

Current year budgeted expenditures for this department using funding collected under the adjusted rollback rate is $696,000.  If the grant funding for repointing brick at the Peck Center does not materialize, the total amount funded this year for PARD capital projects drops to less than $150K.

Via a detailed slide presentation, Ross provided the list of improvements sought by PARD to upgrade or replace existing facilities.  The total cost identified for just FY 2021-22:  $2,730,000.

The breakdown of those costs is presented below:

“All these items are things we have been promising our citizens for years, and the estimates are probably low,” Ross said.

Under the current 5-Year Capital Improvement Budget, expenses for Parks and Recreation rise to more than $8M. 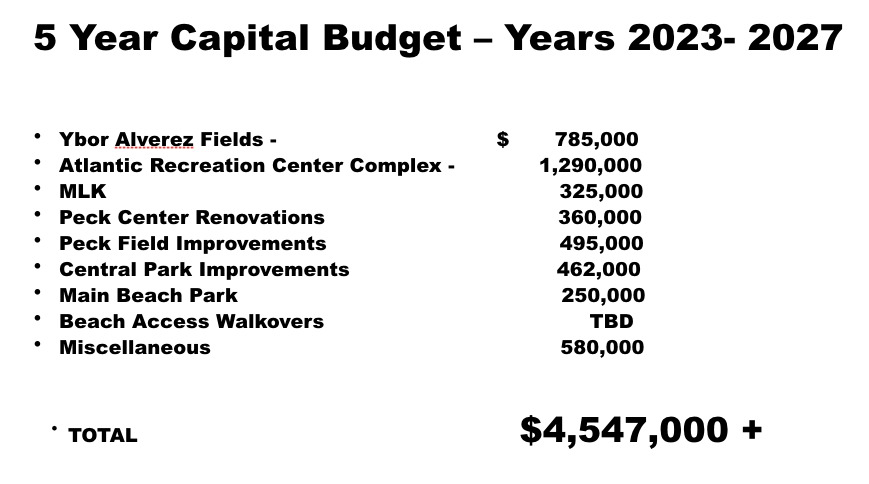 Ross concluded his presentation with a question to the FBCC:  “I would like to know how we are going to go forward into this next fiscal year, recommending what the City should fund, while staying at the rollback rate.  If we go with the rollback rate, we will only have about $150K.”

Commissioner David Sturges agreed with Ross’ assessment of the need to review the list of projects, prioritize them and focus on what needs to be done.  “I don’t think we are going to spend $2.4M,” he said.

Ross agreed with Sturges, but asked how the FBCC planned to prioritize the list to let staff know what commissioners would agree to fund.  “And which of those projects are we going to take off the list permanently?” Ross asked.

Commissioner Bradley Bean stipulated that he would not be in favor of raising taxes, but he said that he was in favor of working with Nassau County to divert a portion of the $100M approved for their Parks and Recreation Master Plan to the City.  The approved plan allotted no funds to the City.  “That could solve our problem without needing to raise taxes,” Bean said.

Vice Mayor Len Kreger cautioned that the PARD list needed to be considered as part of the entire Capital Improvement Plan, which encompasses all departments except the Enterprise Funds.  Kreger agreed on the need for prioritization because he felt it was unlikely that the City would identify funds to cover all the projects.  Kreger differed with Ross, expressing his belief that the staff needed to weed through the list first, eliminating those projects with low priorities.

Mayor Mike Lednovich agreed with Ross, adding that the FBCC will need much more time to go through capital needs of each department.  “I expect Parks and Rec to identify their top priorities,” he saiid.  “This is going to take a robust dialog and more time than we have in this workshop.”

“We can meet as frequently as we need to figure this out,” Lednovich said.

Ross said, “I have no problems with cutting taxes,  But if we cut taxes, we must cut services.  Which services do we want to cut?”

I know this was a summary of the various capital projects, but I trust every department is having to complete a detailed description and cost estimate to justify the project to aid the commissioners in their budget decisioning process. Perhaps every department should be given a total of 100 points to allocate across their projects to see where they view the priority to be.