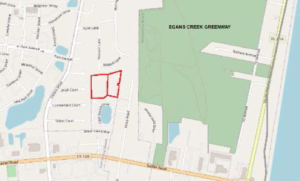 The FBCC unanimously approved Resolution 2020-169, an option agreement with Pheasant Run, LLC that provides the City with 3 months to exercise the option to purchase 5.35 acres of land near Egans Creek Greenway for the purchase price of $675,000. No other buyers can buy the land in this three-month option period.

The City will be responsible for the total cost of acquisition. Funds are available in the Land Conservation Fund Land account, 135 56100.

Prior to the vote, Marc Hudson of the North Florida Land Trust (NFLT) delivered a slide presentation to the FBCC to explain why this was an important property to add to the City’s conservation land holdings. The property is located on a tributary to the Egans Creek Greenway and is considered a mesic hammock forest.  By saving the 5.3 acres from development, 11-16 septic tanks will also be avoided.  This is important because the property is part of the drainage network of Egans Creek.  A Drainage Easement is being worked out for property to preclude area flooding.

If the developer had chosen to develop this parcel, zoning would have permitted up to 21 units on the property.  There are already flooding problems in the adjacent residential area and the addition of more impervious surface would aggravate that situation.

The owner of the property underbrushed the site when he initially considered developing it.  However, Hudson said that while not ideal, understory vegetation in Florida bounces back quickly.

The property was appraised at $720K, but the developer has agreed to accept $675K from the City so that the land may be placed in conservation.

Hudson said that the NFLT is not proposing a 50-50 split with the City on this purchase because it would overburden its fundraising for the Amelia Forever program.  NFLT is working on a project to protect some NaNa dune parcels on American Beach and a property on the Greenway.  Those two projects will cost more than the total price of the Pheasants Run property.

The Fernandina Beach City Commission (FBCC) earlier directed the City Attorney and City Manager to work with Marc Hudson and NFLT to acquire land parcels for conservation or passive parks.

Commissioner Mike Lednovich asked Hudson if this property was on the original list identified by NFLT for purchase for conservation.  Hudson said it was ranked in the top 10 percent of available property, adding that there are not many 5 acre lots available for purchase in the City.

Vice Mayor Len Kreger said that he had nominated this property for purchase in accordance with the Land Conservation Ordinance.  He said City Planning Director Kelly Gibson had expressed serious concerns over the problems that potential development of this property would create.  Kreger verified that the City had sufficient funds in its conservation fund to purchase the property.

Commissioner Chip Ross moved to approve the purchase and Kreger seconded the motion.

Lednovich asked Hudson, “Is there any doubt in your mind that if we did not acquire this property, it would be developed?”

Hudson replied, “Absolutely.”  He went on to say that when the property owner learned about the Amelia Forever project, he reached out to the NFLT because he thought conservation was a better use for the property than development.

Lednovich said, “I want to address the elephant in the room.  We [Commissioners] have received emails claiming that the owner had acquired the land in 2019 and would make a 42 percent profit on it.  But that’s what’s happening on the island with property.  So this Commission has the choice of either seeing houses with septic tanks on the property or we could conserve it.”  He said that buyers are speculating on land purchases in hopes that the City will consider their parcels for conservation purchase.  He acknowledged that there would be a profit to the owner, but that he supported the purchase.

Commissioner Chip Ross said that he wanted to add a “slightly different spin” to the discussion of the 42 percent profit by looking at some calculations.  He acknowledged that the land had been purchased in 2019 for $475K as a distress sale.

Ross said, “If you divide that by 21 units that could be placed on the property, you come up with $22,600 per unit.  Adding in other costs for infrastructure and construction, you come up with $72,600 per unit.  That brings your total investment to $1.5M. … These “finished” lots would sell in the range of $150-200K each.  That would bring in $3.1M.  So I would suggest that the owner is not making a 42 percent profit, but that he is losing $1.6M.  So I’d like to give a shout out to Mr. Keffer for selling this land to us because he could make a hell of a lot more money developing it.”

Following the 5-0 vote, Miller said, “This is how you conserve land. You put the money out there, you buy it, you conserve it.  No lawsuits.”  He received a round of applause from the audience.

Hudson presented the FBCC with an overview of conservation purchases to date arising from joint NFLT/FBCC efforts. 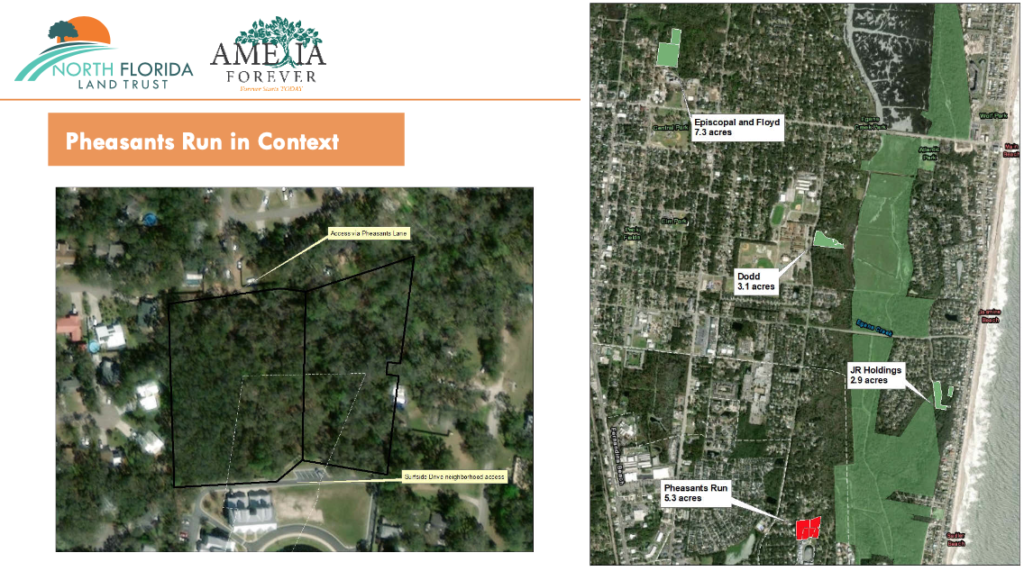 To learn more about the Amelia Forever campaign, click here.