The design inspiration for the new terminal at the Fernandina Beach Municipal Airport (FBMA) is the World War II – Korean Era airplane: the F4U Corsair. Selected because of its relevance to the FBMA, this design has proved to be both controversial and inspirational to many local citizens and members of the aviation community. 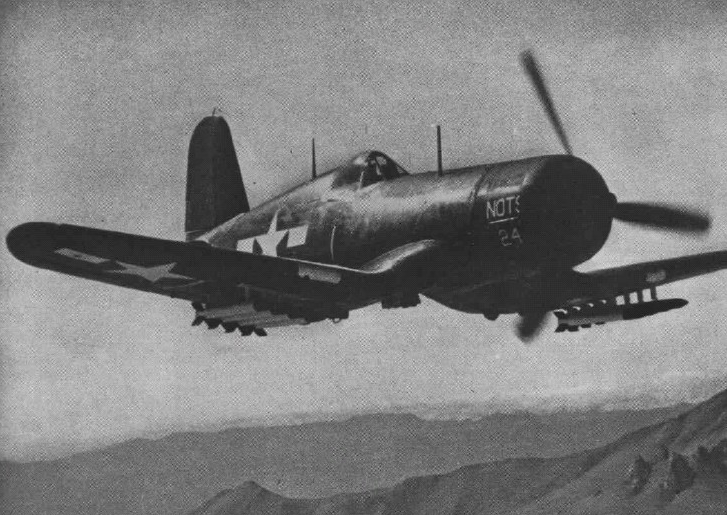 The airplane has been called one of the Navy and Marine Corps’ best fighter aircraft. It is a propeller driven aircraft, recognizable because of its inverted gull wing design. It could exceed 400 mph.

Because of its heavy engine, the plane required a long nose, which placed the cockpit far back in the fuselage, impeding pilot visibility. According to the National Naval Aviation Museum, the plane also exhibited adverse stall characteristics at slow approach speeds and a tendency to bounce on landing. These factors delayed introduction to carrier service, leaving it to Marine land-based squadrons to introduce the aircraft to combat in February 1943.

Among the notable squadrons that flew the airplane from island airstrips were Fighting Squadron (VF) 17, nicknamed the Jolly Rogers, which shot down 152 Japanese aircraft, and Marine Fighting Squadron (VMF) 214, the famed Black Sheep commanded by Medal of Honor recipient Major Gregory “Pappy” Boyington. Eventually, the aircraft’s problems aboard ship were solved, the solutions in some cases attributed to British Royal Navy pilots who flew export versions of the Corsair. This allowed for assignment of Navy and Marine Corps squadrons to aircraft carriers in the latter part of World War II.

Corsairs piloted by American Naval Aviators shot down 2,140 Japanese aircraft in World War II. It has been said that the sound the aircraft made when flying close support missions in the Pacific Theater inspired the Japanese to call the plane “Whistling Death.”

The plane continued service into the Korean War. Marine Captain Jesse Folmar flew a most unusual mission in the skies over Korea, becoming the first piston-engine pilot to down a MiG-15 jet in air-to-air combat.

All told, three manufacturers (Vought, Brewster and Goodyear) delivered more than 12,500 F4Us in 13 production versions during the period 1942-1952, the longest production of any World War II fighter. The aircraft also flew in the military forces of six foreign nations, including France, which employed them in the campaigns in French Indochina [later Vietnam]. 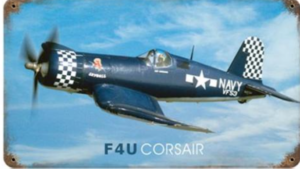 At one time, the Friends of Fernandina Aviation (FOFA) had a goal to erect a detailed model of the Corsair as a monument to the plane’s role in the Fernandina Airport’s history. But that plan has been shelved. According to FOFA President Mickey Baity, “It was problematic finding someone to construct a display aircraft; there was no real aircraft available and too hard to maintain if we could even source one.”

But Brian Echard, President and CEO of the new Fixed Base Operator (FBO), whose operation will share the new terminal along with the city, has found a way to showcase the F4U Corsair. Echard has invested $75,000 to have a model built that will hang from the ceiling of the new terminal. This model will belong to the city and remain for aviators, visitors and students to appreciate in the years ahead.

Although not a certainty, there may be a fly-in of an actual Corsair when the new terminal is dedicated in July.  The Fernandina Observer  has been tracking construction progress.

Click here to see the F4U Corsair in flight.

You may read much more about the F4U Corsair online. Earl Swihnart has written a comprehensive article on the plane. You may also visit the National Naval Aviation Museum in Pensacola, FL to see the plane on display. 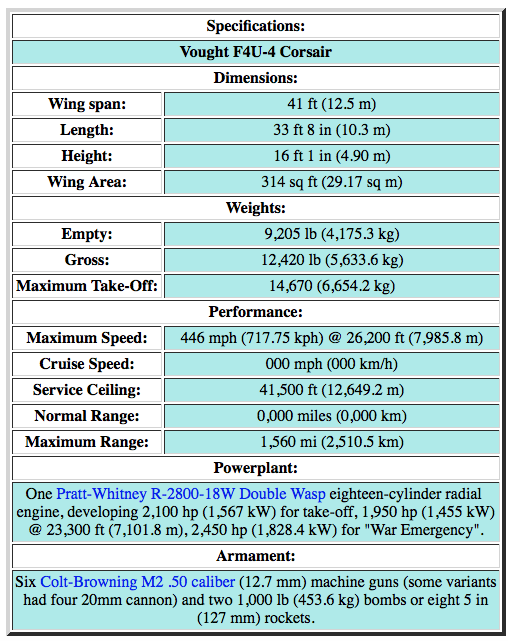