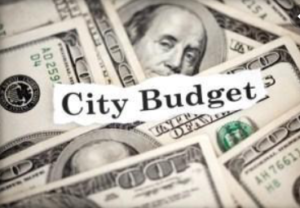 City staff and City Commissioners devote weeks and months starting each spring on preparing the City of Fernandina Beach Budget for the next fiscal year, which begins on October 1 each year.  This year is no exception.

At the Fernandina Beach City Commission (FBCC) workshop prior to the April 20, 2021 FBCC Regular Meeting, Commissioner Chip Ross attempted to engage Commissioners in a discussion of the City’s two most troublesome City Enterprise Funds:  the Golf Course and the Marina.  His goal was to reach some understanding of how the FBCC wanted to tackle debt, operating expenses and capital investment for each enterprise.  Consensus among commissioners would help City staff draft a budget that would ultimately receive Commission support for final adoption in September.

The $110,000 debt on the Golf Course books for the clubhouse and irrigation will be paid off this year.  Operating expenses are expected to break even this year.  That includes the $220,000 subsidy from the City’s General Fund.  Ross reported that every year since at least 2013 the City has subsidized golf operations to the tune of $220,000 or more.

Ross went on to address what has been the City’s practice — legal, but frowned upon by the auditors — of doing a one-day transfer of funds from the Utility Funds to the Golf Course Fund and back to show an end of year balanced budget for the Golf Course Fund.  This year there will be a $1.5M deficit that needs to be accounted for.  In light of the auditors opinion that the one-day transfer of funds needs to stop, Ross sought input from the other commissioners on ways to do so.

The future management of the City golf course is out for bid.  Ross noted that there are no capital expenditures for the golf course provided in the proposed Capital Budget.  He suggested that any bidder would want to know how much money the City was prepared to invest in the golf course. 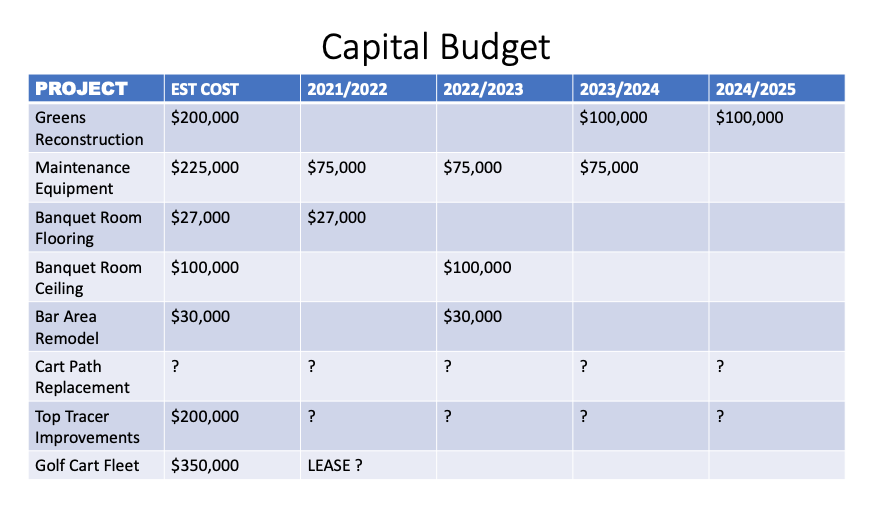 Vice Mayor Len Kreger said he is willing to subsidize the golf course facility into the future because he considers it a recreation facility.  He did not specify an amount of subsidy.  With respect to the auditors’ concerns over one-day borrowing from the Utilities Funds, Kreger said that the City should look closely at what he estimated to be a $15M reserve in those funds to determine what an appropriate level of reserves should be.  Kreger opined that the City will need a detailed listing of services required from a new golf course management team.  He agreed that for the Golf Course Management RFP, the Capital Improvement Plan needs to be scrutinized and prioritized to meet the level of service the City expects to provide.

Commissioner Bradley Bean asked if the $220K subsidy was the only money the City gave annually to the golf course.  Ross answered that every year the one-day transfer goes up in amount, so the City actually provides a bigger subsidy.  Bean agreed with Kreger on the recreational advantage provided by the golf course and agreed to support “a slight General Fund [subsidy]” to fund it.  “Ideally, if we can keep working to improve the golf course, that number should go down over time,” Bean said.  Later in the discussion he added that he would have no problem with transferring surplus Utility Funds to the golf course operations.

Mayor Mike Lednovich repeated a point he has repeatedly made:  For 10 years the City transferred a total of $1.2M from the Golf Course Fund to the General Fund and never repaid the money.   “The City owes the golf course $1.2M,” he said.  “What’s fair is fair.”  He added that the golf course is the most used recreation amenity in the city, with more activity than the marina or the airport, and therefore favored continued General Fund support.  Lednovich said that he could not consider capital needs of the golf course in isolation from all the City’s capital needs.

Commissioner David Sturges supported continuing the annual $220,000 subsidy to the Golf Course.  He expressed moving forward with both a management team and additional improvements.  He reported that part of the golf course’s problem is an inability to hire and retain adequate staffing to keep the greens in good condition.  “I think it’s time to step up our game to maintain [the golf course],” he said.

Ross said that he believed that the $220,000 subsidy from the General Fund was reasonable.  He also agreed Vice Mayor Len Kreger that if after studying the reserves in the Wastewater Fund, the City is assured that there is sufficient funding to maintain safe and effective operations, consideration could be given to transferring some of those reserves to other operations.  He expressed concern that potential bidders for golf course management would need to know how much the City would agree to invest in improvements before submitting a bid.

Lednovich responded to Ross saying that he would expect the bidders and their experts to tell the City what shape they expected the course to be in.  “And then, to reach that status from an agronomy perspective, they would tell us it will require this much money,” he said.  “I don’t think we know that right now.  I wish we did.”

Ross said, “I’m not an expert, but from going to the Golf Course Advisory meetings, I think we need to invest considerably more than we are right now.”

“The question is,” Ross said, “where is all this extra money going to come from, especially if you are talking about cutting taxes and going to the rollback rate.”

Ross stated that the current annual positive cash flow for the marina as estimated by Oasis Marinas is $400K.  This does not include debt payment.  The southern basin will need to be dredged this fall at a cost of approximately $700K, and the City is seeking a $198K FIND grant to assist in this expense.  He provided an accounting of direct payments to subsidize the marina over the past 8 years:

The one-day transfer of funds from Utilities Funds to cover budget deficits amounts to $2.8.  Ross said that if the City were to borrow $2.8M to reimburse the Utilities Fund at a 3 percent interest rate over 20 years, the annual payment would be $187K.

In looking at upcoming capital expenses for the marina, Ross presented the following:

Total marina debt is about $12M, which includes:

Ross ended his exposition with the following policy questions:

Commission Discussion on the marina

Commissioner Bradley Bean said that he had no problems going out for bids on fall dredging.  He said that the City cannot commit to projects until it can see a list containing all City proposed capital projects.  Ross reminded Bean that the City has already committed to some of the projects by accepting FIND grants for them.  “If we are not going to proceed with these projects, it’s unlikely that we will ever get any more grant money from FIND,” Ross said.  “They have been providing us with $250-275K each year.”

Vice Mayor Len Kreger agreed that the City has committed to these projects to a certain amount.  The City Engineer is exploring additional options.  Kreger said that the City needs to continue subsidizing the marina and that it is his belief that it will ultimately “run in the black.”  He reminded commissioners that over $700K of what is billed as marina debt was used to purchase the Vuturo property on Front Street for the waterfront park.  “[The marina] should not be forced to pay for something it cannot use,” he said.

City Manager Dale Martin said that the marina did obtain some benefits from that purchase, including riparian rights.

Ross said, that regardless of where the debt is shown, the City needs to pay it.  He added that even if the marina achieves a $500K positive cash flow, that is not sufficient to repay the outstanding debts and pay regular dredging expenses.

Commissioner David Sturges said that the City needs to make the marina as profitable as possible.  He suggested that if the marina can expand and add more slips, that will bring in more money.  Ross replied that expanding the marina northward would require an added $3-7M.

Since this discussion took place during a workshop, no votes were taken.

For those interested in tracking the City’s budget development, the calendar below is provided : 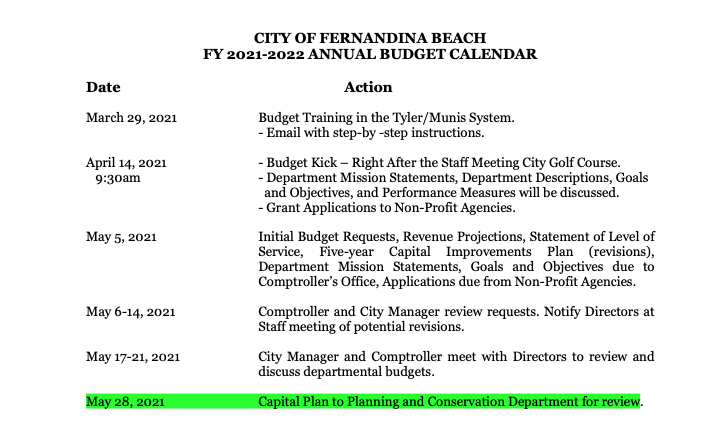 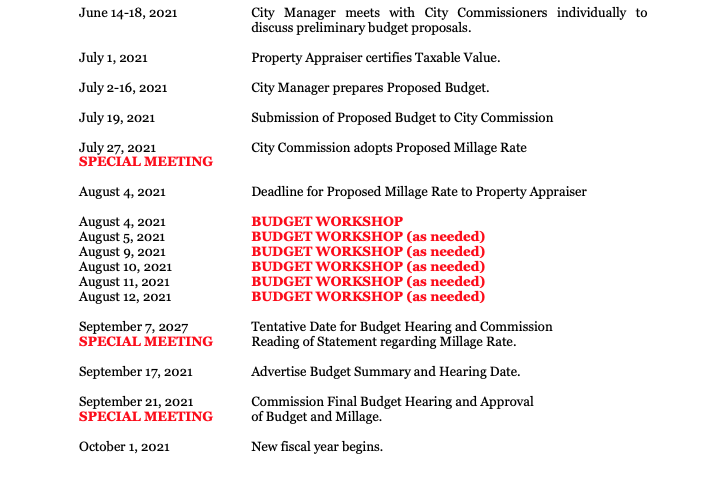