At almost every meeting of the Fernandina Beach City Commission (FBCC), conserving the city’s remaining undeveloped land is a topic of discussion.  Sometimes it is raised by members of the public; often raised by city commissioners.  Those who believe the city needs to do more to preserve tree canopies, wetlands and natural habitats are vocal and passionate in calling for government action to halt both development of currently undeveloped lands and the city’s population growth.  They cite scientific evidence supporting the benefits of trees and wetlands to the health and well being of humans, animals and plants.  They express an urgency for the city to act to preserve undeveloped lands before the bulldozers and dump trucks arrive to create another subdivision.

Members of the Amelia Tree Conservancy and the Sierra Club routinely cite, as supporting evidence, the results of the 2017 National Citizens Survey, in which a statistically valid sample of city residents expressed support for a tax levy to conserve land.

How dire is the current situation?  What has been done in the past to promote conservation and protect the environment? How is the city dealing with increased development pressure today?  And what would be the cost of more government action – or inaction?

This article will attempt to address some of these questions.

A snapshot of the city today

During a recent FBCC meeting, Vice Mayor Len Kreger provided some perspective on the city’s current green space inventory.  He said that 24 percent of land in the city is zoned recreation, 17 percent is zoned conservation and that 19 percent is zoned industrial.  Industrial zoning includes land owned by Rayonier Advanced Materials and Westrock, which will not be developed because it is classed as wetlands. In light of these numbers, Kreger concluded that the city has done an excellent job of preserving green space with more than a third of its land protected from development.

The chart below, provided by Planning Manager Kelly Gibson, provided date on current city land use by zoning district: 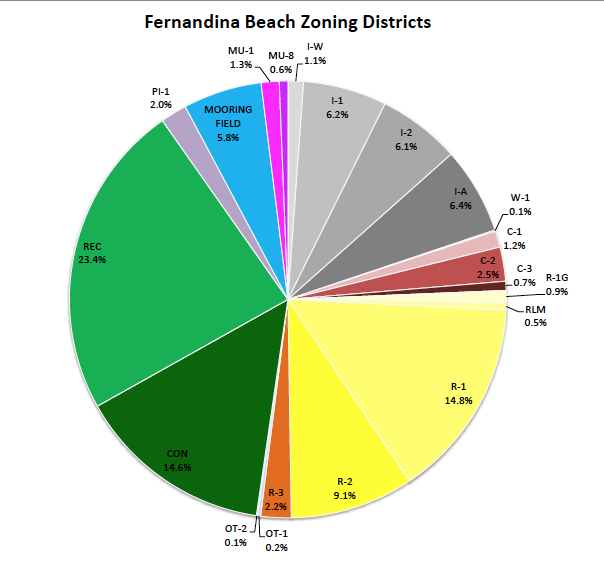 Gibson added, “The City currently maintains a total of 4.16 square miles of properties zoned Conservation or Recreation. This is just over 40% the land area with zoning applied to it. Keep in mind that the City’s jurisdiction extends over water for the mooring field which has no zoning district extended to it.”

The residents of the city approved a bond referendum in the amount of $6M to purchase land for conservation.  The Greenway, 300 acres bordering Egans Creek, was added to the city’s inventory of undeveloped land with these funds and opened as a public park in 2000.  The last money left in this fund was used in 2008.

Fernandina Beach Planning Manager Kelly Gibson reports that only 6 percent – 856 acres – of land in the city is currently vacant. The amount of  vacant land (exclusive of conservation, recreation land and exclusive of known/ pending or under construction development projects and active subdivisions) totals just under 300 acres. [Updated 8-29-18]

Amelia Island sports 13 miles of unspoiled beaches, about half of which are located in the city of Fernandina Beach.  Local environmentalists and the city have vigilantly pursued activities and legislation to protect sea turtle nests and dunes along its beaches.  While not uniformly popular with long-term residents, the city has banned beach driving along its beaches to protect the natural habitat of wildlife and minimize beach erosion and dune destruction from human activities.

There is no doubt that residents, homeowners, and visitors appreciate the value of the island’s tree canopy.  City government has established both a tree ordinance and a Heritage Tree program in recognition of this community value.  The current city commission recently authorized the creation and funding of a new position – urban forester/arborist – to work closely with city staff, residents and developers to protect city trees.  Recruiting to fill this position is underway.

Over recent years, city planners have worked with developers and interest groups to save large numbers of trees, including ancient oaks.  Through these efforts, developers have also come to acknowledge that preserving trees increases the value of their products and the satisfaction of the new homeowners.

The FBCC recently passed an ordinance that would not permit consideration of variance requests to fill wetlands.

The city has also established a Conservation Land Fund for the purpose of buying undeveloped land so that it might remain undeveloped.  However, at this writing there is little money in the fund and no procedures for identifying, prioritizing and/or recommending purchase of conservation lands. Conservation advocates have criticized the city for failing to move aggressively to add money to this fund to begin purchasing land for conservation.

Two sitting commissioners – Vice Mayor Len Kreger and Commissioner Chip Ross – have been the most vocal in calling for action with respect to conservation matters.  To that end, the FBCC has placed the item on the October 3rd Regular Meeting Agenda for full public discussion of ideas and options.  Kreger has asked that city staff present the commissioners with options at that time.

Ross, who has expressed impatience with the debate to date, spoke to five points during the August 21, 2018 FBCC meeting:

Although Ross proposed several specific actions to address these points, Commissioner Roy Smith objected to consideration of the items because they had not been formally placed on the agenda and noticed to the public.  As a result, Ross’ attempt to obtain consensus on actions morphed into a consensus to place the items on the October 3 agenda.

Some of the items Ross suggested would involve voter referendums, which cannot be held until 2020 city elections unless the city opts for a special election to decide upon charter changes and a general obligation bond for an as yet undetermined amount of money, probably $5-10M or more.

Kreger also suggested consideration of creating an island wide municipal taxing unit to pay for conservation lands for the entire island, not just the city.  This would be a tax similar to “The Sand Tax” that all island property owners would pay.  Such a tax would need agreement from the Board of Nassau County Commissioners in addition to the FBCC.

The FBCC will consider using part of the $1.2M currently in the Parks & Recreation Impact Fee fund for conservation purposes at their September 4, 2018 Public Hearing on the FY2018-19 Budget.

Although the $6M of voter-approved bond money has been spent since 2009 to purchase land, which became the Egans Creek Greenway, city taxpayers continue to pay off the debt.

According to an email from city Comptroller Patti Clifford, “The GO (General Obligation) Bond was originally issued for $6 mil in August 2001.The proceeds were used to buy land and improve various [Parks & Recreation] facilities.  None of the proceeds remain.

“During the life of the Bond, the FTC gave us a $1.7M grant for the reimbursement of some land purchases.  This money was plowed back into the Bond’s Project Fund account and also used for the intended purpose.

“The debt had an original term of 20 years – maturing in 2021.  In 2010, we refinanced the bonds to take advantage of a more favorable market. The maturity did not change.  Below please find a recap of the debt service for the current fiscal year through maturity.”

Will the FBCC opt for another voter referendum to authorize another bond to purchase land for conservation?  If so, absent a special election, voters would not see the item until the 2020 election.   It will then be up to city voters to decide whether they are willing to invest in future land purchases in the name of conservation.