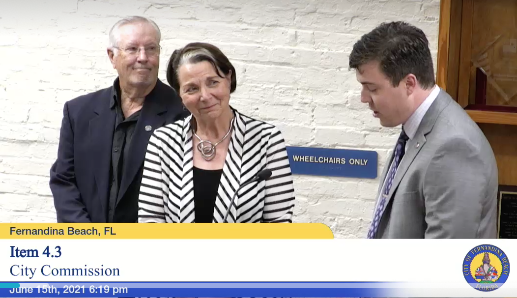 Wanda J. Lanier, who has been at the helm of the Barnabas Center, Inc. for the past 11 years, will retire from her position as Chief Executive Officer on June 30, 2021.  In recognition of her leadership which resulted in significant achievements for the agency and its clients, the City of Fernandina Beach expressed its appreciation to her with a Proclamation delivered at the June 15, 2021 Regular Meeting of the City Commission.

At the invitation of Mayor Mike Lednovich, Commissioner Bradley Bean delivered the Proclamation, which acknowledged the many services that Barnabas provides to those in need in Fernandina Beach and Nassau County including healthcare assistance, mental health assistance and eliminating food insecurity for many.

The Proclamation also noted Lanier’s leadership of a successful capital campaign and an endowment campaign, which led to the purchase and renovation of the Barnabas Center, Inc. Comprehensive Service Facility and expanded healthcare services to western Nassau County. These achievements resulted in prestigious nonprofit awards and recognition including: Florida Blue Sapphire Award, Nassau County Chamber of Commerce Non-Profit of the Year (multiple years), Charity Navigator 4-Star Rating, and GuideStar Platinum Seal of Transparency.

Additional achievements for Wanda Lanier include: Florida Times-Union EVE finalist, Girl Scouts of the USA “Women of Distinction” winner, and 1996 Olympic Torchbearer for her role in addressing homeless issues in northeast Florida. 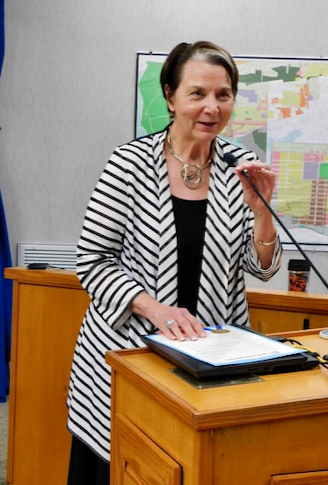 Bean concluded the Proclamation, “Ms. Lanier is a consummate professional who consistently led by example with the utmost compassion and dedication. She is well regarded by industry peers, colleagues, and residents alike, and the sincere and conscientious efforts she demonstrated on the job during her eleven years of dedicated service have dramatically benefitted the City of Fernandina Beach.”

In accepting the Proclamation Lanier thanked the City, saying, “After hearing [the Proclamation] I think it is time to retire.”  She said that it has been an honor and a privilege to work in a City and a County that were so welcoming.  “I’m proud that Barnabas has made such a positive difference in so many lives over more than 30 years,” she said.  “I’m so happy that I had a little piece of making that happen.”

She received a steady round of applause as she left the podium.