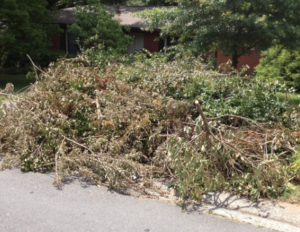 Fernandina Beach residents no longer need to fear that they will be required to bag and bundle their yard waste in order to have it hauled away.  At the March 2, 2021 Regular Meeting of the Fernandina Beach City Commission (FBCC), Commissioners voted 4-1 to pass four measures returning responsibility for removal of residential yard waste from its contracted waste hauler to the City’s Sanitation Department.

“Yard Waste” means the accumulation of leaves, grass cuttings, shrubbery cuttings, limbs, tree trunks, or other refuse from the care of lawns, gardens, shrubbery, and trees from residential homes.

Effective April 7, 2021, the City of Fernandina Beach will resume responsibility for the collection of residential yard debris (Resolution 2021-31).  This move follows widespread citizen dissatisfaction with the efforts of the City’s contracted waste hauler — Waste Management (formerly, Advanced Disposal) — to adhere to regular pickup schedules for removing yard waste.  The lag in pickup time resulted in growing piles of yard debris in the City right of way that sometimes waited weeks to be removed.

Four City Commissioners voted to approve this measure, while Bradley Bean, the lone dissenter, opposed the move.  Bean instead supported enforcing terms of the existing contract, which would require homeowners to bag or bundle yard debris, thus avoiding a rate increase.  Other Commissioners argued that people would not abide by the change in pick up method, thereby requiring the City to pick up the material that did not follow the rules set out in the contract.  Citing the age of many residents, Commissioners believed that it was impractical if not impossible for them to “bag and bundle” yard waste, especially in heavily tree laden areas of the City.

Bean, who is a strong proponent for small government, expressed concerns that returning collection of yard debris to the City was only a first step in returning all trash collection to the City.  Commissioner David Sturges did not seem to think that would be such a bad move, citing the excellent service citizens had received prior to privatization.

The decision to privatize trash collection was made several years ago following an accident with a City trash truck that left a woman seriously injured.

The FBCC also approved on First Reading at their March 2, 2021, Ordinances 2021-11 and 2021-12, amending the City’s franchise agreement with Waste Management  (Advanced Disposal).  The agreement calls for an annual adjustment of rates using the Consumer Price Index (CPI) for All Urban Consumers – Water, Sewer and Trash Collections Services. The agreement is being amended to remove yard debris services and to bring such services in-house. The current fee schedule is being amended to reflect both the change in service and the annual CPI increase.

Both Ordinances will require a Second Reading.

The change in service will add $3 to residential sanitation fees. Commissioner Chip Ross reported that he had received three emails from residents willing to pay even more for yard debris collection to remain as it is.

The FBCC also approved Resolution 2021-32 authorizing the purchase of a grapple truck in the amount of approximately $160,000 in order to pick up yard debris no longer collected by Waste Management.

City Attorney Tammi Bach clarified that the City will pick up yard debris from residential properties, whether generated by the homeowner or a landscape company employed by that homeowner.

I don’t see any discussion of a reduction in the collection fees for waste management. There current fees include some amount for yard waste collection (even if bagged or bundled). I’m sure they are nice people at waste management but it seems there should be some reduction in their fees since they will be doing no yard waste collection. I think there should be some explanation of this by our city manager and city commissioners.

I hope they are going to mulch or compost the collected yard waste. It could be an excellent source of organic fill for gardeners and landscapers.