Some of the more interesting parts of the Fernandina Beach City Commission (FBCC) meetings often surface during the discussion portion of the agenda.  This past week, Commissioners discussed their individual evaluations of Charter Officers.  They also discussed the ongoing COVID pandemic.

Discussions on the Covid pandemic and its impact on the local community have been wide ranging since March. Some Commissioners have favored more stringent face mask requirements along with greater enforcement and fines for scofflaws.  Others have suggested that the problem cannot be solved bureaucratically.

The question that has loomed large is this:  should the City be preparing for long term economic hardship or should it be planning for a post Covid future?  Commissioners Mike Lednovich and Chip Ross are the leading spokesmen for the divergent opinions in this discussion.

Over the past few meetings during the discussion period, Commissioner Lednovich has been calling for budget cuts, project delays and spending only on what he terms “essential items” to reflect current economic uncertainties as a result of pandemic unknowns.  He has expressed his belief that the economy will worsen both for the nation as a whole and the local community as well.  He has stressed greater budget scrutiny to keep taxes for the upcoming year at the rollback rate, thereby keeping more money in taxpayers’ pockets.

During discussion at the September 15, 2020 FBCC meeting, Lednovich presented slides showing that the number of county Covid cases appears to be declining: 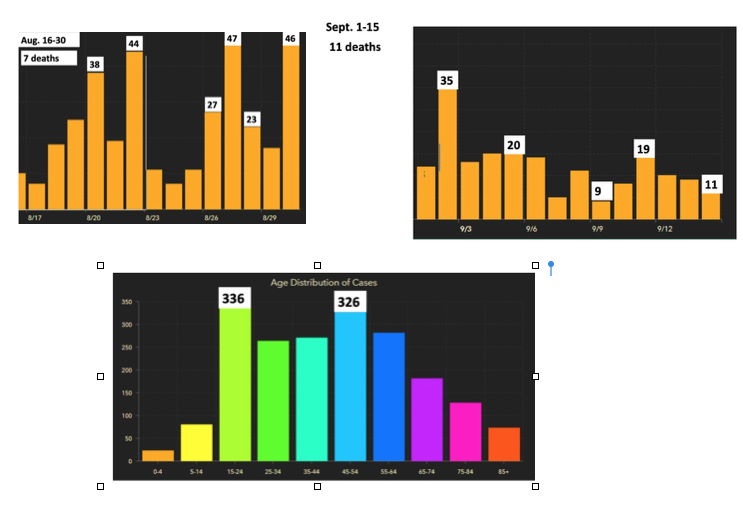 He went on to express a concern raised by a citizen over a national putters tournament held this past weekend at the Main Beach Putt-Putt Course, during which allegedly more than 100 people competed in close proximity, most not wearing face masks.  The citizen sought intervention from local police, but County Dispatch hung up on her call after ascertaining that there were no safety issues at stake other than face masks.  Lednovich said that now that a national tournament has taken place during which the organizer did not mandate that over 100 participants follow CDC guidelines, the community has been exposed to more Covid risk.

Commissioner Chip Ross responded to some of the concerns that Lednovich has been raising over Covid impacts known and unknown on the local community.

Ross thanked Lednovich for his comments and updates, agreeing with him that many residents have found themselves jobless and living with stress, fatigue and loneliness as a result of the pandemic.  “Although it may look dark now,” he said, “we will get through these difficult times.”

Ross went on to point out what he considered to be signs of hope showing that the local economy is on somewhat of a rebound.  “If you look across the street,” he said referencing the recent transformation of a boathouse into a restaurant, “you will see that someone had enough confidence in the economy to put a new restaurant in, which will open soon.  There is enough confidence in our economy that two downtown businesses that chose not to reopen have already been replaced by other businesses.  There are no empty storefronts.  The fact is that there are more businesses that would like to locate on Centre Street.

“The City continues to issue building permits at the same level or higher than last year.  And Nassau County initial claims for unemployment have dropped from 900 a week in March to 78 in the last week of August.  That is certainly not great for the people unemployed, but it is a huge improvement.  The local unemployment has dropped from 12.1 percent in April to 7.5 percent in July, the latest data available.”

“We need to continue to suppress the virus by wearing masks, socially distancing, and avoiding poorly ventilated gathering spaces,” Ross said, agreeing with Lednovich.  “I think people are beginning to learn and adjust to this virus.  It’s going to be around for another 9-18 months.  And hopefully, we are beginning to see some light at the end of the tunnel, although we are still in a serious situation.”

Vice Mayor Len Kreger reported that veterans cannot be evicted during the Covid pandemic.  He also noted that local businesses are not taking advantage of CARES funding available through Nassau County. He encouraged local businesses to apply.

The number of items discussed has ballooned over time, since any Commissioner can add a topic to the list.  Items are published under a general heading, such as conservation or waterfront, with no back up material to give the public an idea about the discussion’s direction or purpose.  The rationale for this portion of the agenda is that because all discussions among Commissioners must take place in public, this is the only time that Commissioners can discuss their concerns and ideas with their peers before proceeding to task City staff with responsibility to research and/or implement various policies or actions.  If a Commissioner receives no support or interest from other Commissioners, there will be no future action item on the agenda.

Because discussion topics are not advertised for action, no votes can be taken on any topic covered.  Recently, concerns have been raised by some Commissioners that they are skirting the legal requirements by seeking consensus on issues raised during this portion of the agenda.