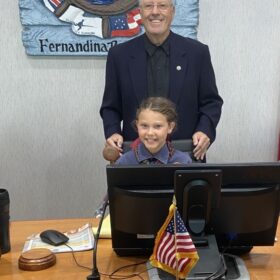 EDITOR’S NOTE: A few weeks ago, we offered the seven Fernandina Beach City Council candidates an opportunity to submit a 1,000-word essay on whatever is on their minds about the city. This is the third essay submitted.

Philosopher George Santayana famously stated, “Those that fail to learn from history are doomed to repeat it.”

I’m Fernandina Beach Mayor Mike Lednovich and for the last four years I’ve fought to preserve our city’s unique “Quality of Life” by correcting the mistakes of the past.

There have been, and continue to be, numerous challenges to preserve what makes Fernandina Beach such a special city. We face aggressive developers who want to build more new homes and townhouses. We have more than 1.2 million tourists that use city facilities/services and pay nothing to support their upkeep. And there is the exploding growth in Nassau County to contend with.

Previous city commissions routinely approved rezoning commercial properties into residential use. I voted 100 percent of the time against this practice and will continue to do so. Some examples are:

In all, my opposition to rezoning prevented roughly 500 more houses or townhouses from being built in the city.

I pledge to protect our environment, tree canopy, wetlands and wildlife. Some past examples are:

Currently under my direction, the city attorney is working on a dune protection ordinance and a protected canopy tree road ordinance that would ensure future generations can enjoy the same quality of life we have today.

During my term in office, there have been numerous plans that would have negatively impacted our “quality of life.” I’ve opposed all of these efforts:

We’ve also made tremendous strides in improving city infrastructure and roads. Some examples are:

During the next four years, we must protect the city from storm surge and flooding by completing the riverfront seawall. We also must address flood prevention issues at the Escambia Slough, which is part of the drainage system for downtown Fernandina Beach, and at Atlantic Avenue at Egans Creek.

My goal during my term was to make city government more transparent to voters. To that end, I’ve published all important city documents on social media pages. I’ve corrected numerous misinformation posts on social media with facts. I meet with citizens, answer my emails and return all telephone calls.

As mayor and commissioner, I’ve addressed pressing problems such as the customer service issues at the Building Department, downtown music concerns, and protecting trees and dunes at construction sites, by holding workshops with public input.

There are many challenges ahead of us such as completing the riverfront flood protection; repairing/maintaining city buildings, parks and sports fields; identifying new revenue streams to relieve the burden of taxpayers and implementing solutions for additional parking and increased traffic.

I’ve enjoyed meeting so many of you during my first term: thanks for your suggestions and encouragement. I humbly request your vote for Mike Lednovich’s Quality of Life efforts as City Commissioner, Seat 4 to continue to ensure our city remains a very special place.

We appreciate your efforts to combat overdevelopment in Fernandina Beach, and it is great that you have made city government more transparent.

Voting no on moving the athletic fields and courts away from Central Park is not laudable, as Mr. Lednovich says. It’s shortsighted and misguided. Redesigning the park – as recommended by a professional consultant in a study paid for by the city several years ago – would open the full acreage of that central space to greater public use and ease pressure on downtown congestion. At present, most of the park is fenced off from the public for more than half of the year as the kids are in school. Imagine if that land was centered around a fountain – like Forsyth Park in Savannah – with, perhaps, a dog run and a band shell. There are few children biking over to play athletics and you, Mr. Lednovich, should know that because there are few bike stands and no clamor for more. That park is largely wasted space and reimaging the land for greater public use would be leadership in action.

I really would like the City Cemetery,Bosque Bello, to be restored. The older part of the cemetery is in such mess that it is not a reflection of the care the Mayor states that he has for the city. That’s a shame.

You forgot your efforts to destroy the Fernandina Beach Munixipal Golf Course by starving proper funding of it. You forgot the way that you criticized the municipal golf course with your destructive comments. You should be removed from office before you can do more damage. By the way folks, the municipal golf course is a neglected revenue resource. Let’s remove this political hack now.

This man is part of the “now that I’m here lock the doors” activist crowd who disguise recividism as progress—enough. New thoughtful leadership is needed who can balance progress with preservation. Out with this activist.