The Fernandina Beach Airport Advisory Commission (AAC) gave a unanimous thumbs up to adding an RV park to its list of acceptable uses for non-aviation related property in the airport’s Core Development Area 8. The AAC vote followed a presentation by local developer Bob Allison at the AAC’s December 14, 2017 meeting.

Allison explained his concept for a “Ritz Carlton-type” RV park, to be located at the west end of Core 8 on non-aviation property at the end of Bailey Road. AAC members appeared to find the idea intriguing. However, their vote did not endorse Allison’s proposal or recommend its approval to the Fernandina Beach City Commission. Rather their vote reflected that such a project constituted an “acceptable use” for the property in question, provided that the FAA concurred.

Core Development Area 8 consists of roughly 53 acres. The majority of the land is currently developed by the Ybor Alvarez Sports Complex, Nassau County Humane Society and Florida Public Utilities. The Airport Master Plan (7.2.9) currently lists acceptable uses for that portion of airport property as light industrial, office/research, and aviation business. Allison only addressed the western most portion of the area. 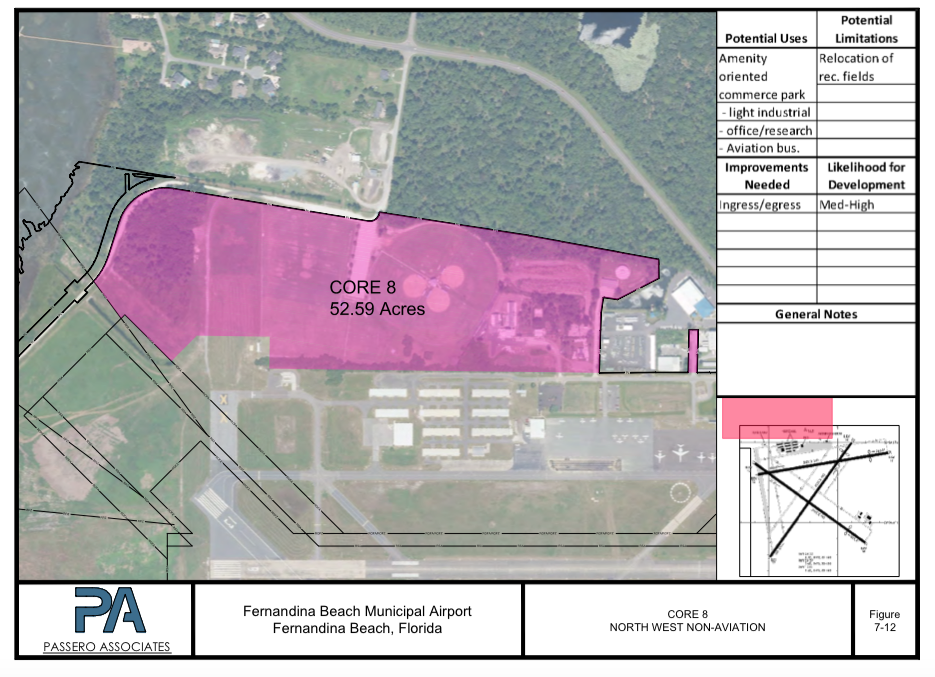 AAC members concurred with Allison’s assertion that Amelia Island would benefit by a high-end RV park. Currently, Fort Clinch is the only RV campsite on the island and is usually booked up a year in advance.  Large motor homes require more support than average RV parks can provide due to their size, electronics and energy requirements.

Vice Mayor Len Kreger, who as Commission liaison attended the meeting along with City Commissioners-Elect Philip Chapman and Ronald “Chip” Ross, emphasized to AAC members that they were not being asked to endorse Allison’s concept. It would be left to the FBCC to decide if such a use should be amended to the Airport Master Plan. If the FBCC concurred, coordination with the FAA would be required before any specific plan could be considered. He added that it would also be the FBCC’s decision whether to turn to Allison or solicit more bids.

AAC members indicated that they have not been approached by any other entity with a plan for that particular parcel of land.

In his written proposal for leasing vacant airport property for a 125-pad luxury motorhome park, Allison certified that he has lined up $3M in financing, and that the ground lease rate he is proposing is four times higher than the lease rate paid by the Amelia River Golf Course. His business plan proposes that most of the park’s management and staff will consist of disabled U.S. military veterans.

Allison has extensive development credentials in Nassau County and Fernandina Beach. He is the current owner and manager of the largest citrus groves and largest irrigated pecan orchard in Nassau County. Allison was the managing partner/owner responsible for the Fernandina Harbor Marina and many residential developments including Egans Bluff Units I and II, Sweetwater Oaks, Cashenwood, Riverside and others. Allison takes pride in his sensitivity to beautifying his developments with tree plantings, landscaping and careful development. He wrote, “I have no interest in building what some might describe as a ‘trailer park’.”

In making his presentation to the AAC, Allison introduced Tim McIlwain, an associate who developed the idea of surrounding the RV park area with an arboretum dedicated to the public display of Florida citrus and other indigenous Florida trees. As a former Container Corporation, Smurfit/Stone manager, McIlwain directed two nurseries that produced over 50 million seedlings each year.

Allison touted the economic benefits to the local economy, highlighting the benefits to the golf courses, since his research has shown that at least 60 percent of luxury motorhome visitors golf.

This is not Allison’s first attempt to build a luxury RV park on Amelia Island. In 2013 he targeted 25 acres of city-owned vacant, undeveloped land along Canopy Drive. However, due to pushback from neighbors, Allison abandoned the plan. He remains determined to see his plans come to fruition in a new location.

/>Editor’s Note: Suanne Z. Thamm is a native of Chautauqua County, NY, who moved to Fernandina Beach from Alexandria,VA, in 1994. As a long time city resident and city watcher, she provides interesting insight into the many issues that impact our city. We are grateful for Suanne’s many contributions to the Fernandina Observer.