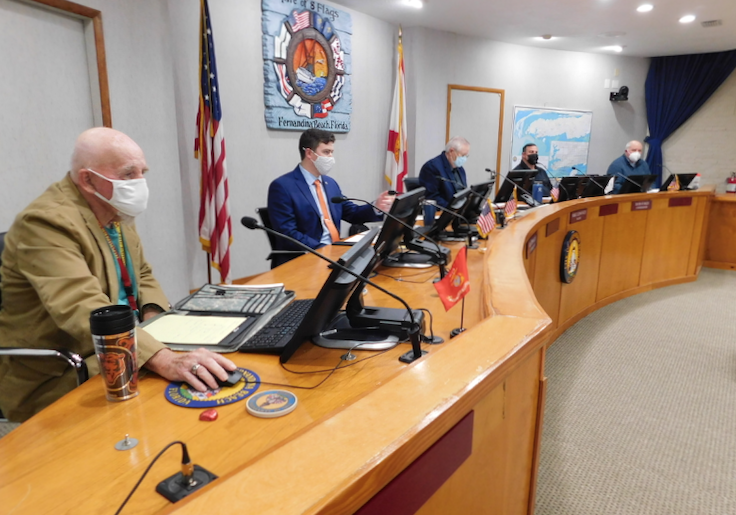 It has taken more than 30 years, countless plans, studies, focus groups and consultants.  Many earlier City Commissions and City Committees have decided on a course of action, only to pull back, rethink or consider new information.  But finally, the Fernandina Beach City Commission (FBCC) — composed of Mayor Mike Lednovich, Vice Mayor Len Kreger, Commissioners Bradley Bean, Chip Ross and David Sturges — took action to begin work on stabilizing the Amelia River front as well as initiating the first stages of a waterfront park.

At their February 16, 2021 Regular Meeting, the FBCC unanimously passed Resolution 2021-21, authorizing City Manager Dale Martin to design and solicit bids for specific limited components of Phase 1 of the Waterfront Resiliency/Park.  The Resolution provided the FBCC’s approval for the City Manager to complete the design effort for specific limited components at the southern portion of the Amelia River waterfront (from the existing boat ramp to the southern limit of Parking Lot D): resiliency (including elements of shoreline stabilization and a seawall), a riverfront walk, and petanque courts.

Funds for the construction of the specific limited components are available in the FY21 budget adopted by the FBCC last fall.

Vice Mayor Len Kreger moved approval, and his motion was quickly seconded by Commissioner Chip Ross, who said, “We’ve talked this one to death; let’s move on.”  Other Commissioners nodded in agreement.

This item followed consideration and unanimous adoption of Resolution 2021-20, approving the FBCC’s 2021 goals developed at their January 27, 2021 Workshop: