Last Saturday night, I went to the theatre. At the beginning of the year, that statement would have been ordinary. However, I haven’t seen or reviewed a play since the end of January. Saturday was the first session where Amelia Community Theatre (ACT) had an in-person audience, a new experience for me as well. And a good one.

The theatre has been looking for plays with limited cast sizes and one of the choices was “Two Across.” It’s a sort of boy-meets-girl story, where two people share a San Francisco BART train at 4:30 in the morning. Both of them are doing the New York Times Saturday crossword, which starts out as a source of irritation and becomes a bonding element. The play moves the characters through the personas they set up initially and then abandon as they get to know each other.

In adapting the play to pandemic times, the actors wear masks and observe social distancing. Even though the play wasn’t written with pandemics in mind, we instantly understand the situation. In fact, it’s almost what we expect and it adds an interesting dimension to the play.

As the leads, Chris Twiggs and Samantha Hilliker were excellent as individuals and worked well as a team. There’s comedy and sadness in the script. The characters have difficulties they are trying to work out. They each can offer a perspective on the other’s issues. They move from distancing to a potential close friendship.

Ron Kurtz did a great job organizing the action to include the social distancing and mask wearing that we take for granted. It enhances the script and doesn’t distract from our appreciation of the story.
The set design is the inside of a rapid transit car with windows that open on a dark curtain. At times a light moves behind the screen, giving the effect of passing through stations. A voice announces stations as the car passes along its route. Unlike many of my experiences on trains and busses, I could actually understand what the announcer was saying.

It was the first time I’d been in an indoor space with social distancing and masks that wasn’t a grocery store since the pandemic began. I was a bit nervous but ACT seems to have done a good job with its layout of seats. I missed being able to congratulate the cast on surviving 90 minutes on stage with no breaks but that was a small price to pay for an enjoyable evening of theatre.

The play runs this weekend. You can livestream or see it in person. Either way it offers a nice theatre experience. See www.ameliacommunitytheatre.org for information. 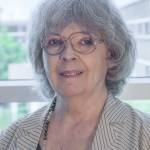