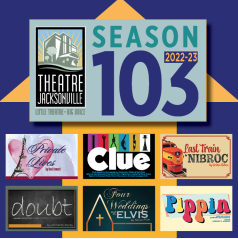 JACKSONVILLE, Fla. (April 19, 2022) – For the first time since 2019, Theatre Jacksonville has slated a full season of in person Mainstage productions, signaling a return to normal for the oldest continually running community theatre in Florida and a celebration of its 103rd consecutive year.

In the spring of 2020, Theatre Jacksonville had its celebratory 100th season disappointingly cut short by the pandemic. Staff and employees became wonderfully creative and designed a completely virtual lineup of productions for the next year and a half. At the beginning of 2022, in-person shows returned to the playhouse with a reduced number of Mainstage productions. For the 103rd season, the fall “Classic in San Marco” is back, and the lineup culminates in June 2023 with the popular musical Pippin.

¨     Private Lives, opening September 16 – This sophisticated, entertaining play was revived in 2002 by the Royal National Theatre on Broadway and tells the tale of a couple – once married and now honeymooning with new spouses – who meet by chance at the same hotel. The season’s “Classic in San Marco” offering, Private Lives first premiered at the King’s Theatre in Edinburgh in 1930 and enjoyed several successful Broadway runs through the decades featuring such stars as Laurence Olivier, Tallulah Bankhead, Gertrude Lawrence, Tammy Grimes, Richard Burton and Elizabeth Taylor.

¨     Clue, opening November 4 – Based on the iconic 1985 Paramount movie inspired by the classic Hasbro board game, Clue is a hilarious farce-meets-murder mystery. Six mysterious guests assemble for an unusual dinner party at a remote mansion – and both cult-fans and newcomers will be left in stitches as they try to figure out WHO did it, WHERE, and with WHAT!

¨     Last Train to Nibroc, opening January 13 – With critics calling it reminiscent of Thornton Wilder, this touching portrait of two people searching for happiness is told through character studies of bookish May and charming young flyer Raleigh. They meet on board a cross-country train in December 1940, that also happens to be carrying the bodies of great American writers Nathanael West and F. Scott Fitzgerald. Audiences will love the blissfully sweet directness of this simply staged romance.

¨     Doubt, opening March 10 – The winner of a Pulitzer Prize and a Tony Award, John Patrick Shanley has woven a brilliant and powerful drama about a nun and Bronx school principal taking matters into her own hands when she suspects a young priest of an improper relationship with a student. The gripping story is “blunt yet subtle,” “manipulative but full of empathy for all sides,” and brings up “fascinatingly nuanced questions of moral certainty,” as reviewed by NY Newsday and Variety.

¨     Four Weddings and an Elvis, opening April 21 – Written by Nancy Frick, this hilarious tale about a four-times-married-three-times-divorced owner of a wedding chapel in Las Vegas will have audiences laughing until their sides hurt. Four funny matrimonies are spotlighted, with truly memorable characters, and they bring new meaning to the phrase “What happens in Las Vegas…”

¨     Pippin, opening June 9 – Winner of four Tony Awards in 2013, including Best Musical Revival, Pippin is the story of one young man’s journey to be extraordinary and how he finds the secret to true happiness and fulfillment along the way. With an infectious and unforgettable score written by four-time Grammy winner Stephen Schwartz, this entertaining and circus-inspired version of the musical captivates audiences of all ages with its timeless story and universal message.

“We are so proud that we have continuously provided excellent programming despite the challenges of the last few years, and we are thrilled to once again return to a full Mainstage season in our historic playhouse,” said Executive Director Sarah Boone. “This 103rd season offers something for all audiences with a variety of productions, each with themes that are thought-provoking, timeless, heartwarming and, of course, entertaining.”

Tickets to all six Mainstage productions are included with All-Access memberships. Pricing is as follows:

All individual memberships receive one complimentary All-Access Pass for Theatre Jacksonville Mainstage offerings. Additional show tickets will be available for $26, as available.

For more information about the 103rd season lineup or All-Access memberships, visit www.theatrejax.com.

1.     The 103rd season at Theatre Jacksonville will begin in September 2022 and will include six Mainstage productions, starting with a September “Classic in San Marco” and culminating with the popular musical Pippin.

Theatre Jacksonville also uses art to advance issues of local concern. From supporting veterans to nurturing arts and recreation, it fosters community partnerships to advance the culture, health and well-being of Jacksonville. As Theatre Jacksonville anticipates its future, it also seeks to build a strong operational foundation to ensure that, just as endowed funds support the theater building, endowed funds will support theater operations. For more information or to donate, visit www.theatrejax.com.