No More Crepes, but a Good New Restaurant 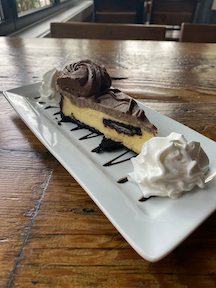 Editor’s Note: The author is our new restaurant and culture writer. Think that’s an odd combination? Well, we think restaurants are so important to this community (and so good) that they must be part of the culture. The author is a singer, performer, writer and a church music minister. He lives in Yulee.

I went on a journey to rediscover a restaurant that had closed down. With a new set of owners, does this restaurant in the heart of Fernandina’s historic district make a splash?

The Patio Place, on 416 Ash Street, was originally a restaurant that specialized in crêpes, which is something you don’t see too often on Amelia Island. After six years, the original owner, Amy Petroy, sold it to Scott and Trish Cline. It reopened in September, as an American-style bistro.

I decided to try The Patio Place on Wednesday around 1 p.m. I hadn’t been to this restaurant in a while, so I was curious to see how active it would be. As I drove past the eatery, I saw people making their way in and out. It was nearly packed to the brim.

I parked my car and took a stroll down the sidewalk. I was quickly enveloped in the ambiance of the atmosphere. People were abundant and their chatter filled the air with liveliness. The Patio Place is nestled just a block off of Centre Street, allowing for a more relaxed and secluded experience.

As I drew closer to the restaurant, I was able to get a full view of its spacious patio. The seating and arrangement of the tables were splendid. Patrons sat underneath the canopy of trees and hanging lights while enjoying their food and beverages.

I continued past and made my way to the front door. It felt inviting with potted plants outside and greenery that made it feel like all facets of the restaurants had been lovingly crafted by hand.

Upon entering I was greeted with a warm and charming aesthetic. It had a rustic vibe, which fit perfectly with the historic buildings surrounding it. The bar area and kitchen were in direct view. The sound of cooking and patrons conversing filtered throughout, as if they were creating their own background music.

Within a few moments, Carol greeted me with a smile and asked me where I’d like to sit. I decided to stay inside. She brought me to my table and was quick to take my order. I asked about the newly opened restaurant, which she was more than glad to answer. I was told there were no more crêpes since the menu had been overhauled, but there still would be live music on Thursdays, Fridays, and Saturdays.

I hadn’t eaten at all that day, so I was ecstatic to try some of their new food. The menu was one page; front and back, and seemed to be carefully curated. The updated menu had a lot to offer. A variety of burgers, salads, and of course, seafood. Shrimp and grits, lobster ravioli, and blackened grouper were just a few of the excellent options.

As I scanned the entrées, my eyes managed to settle on the Fernandina French dip and for my beverage, I got the strawberry lemonade.

The service was quick, especially considering the number of people who were dining around me. Carol brought the lemonade and explained that it was made with a strawberry purée that was blended fresh. Taking a few sips of it left me pleasantly surprised. The strawberry purée mixed with the lemonade felt like a summer’s day.

Not long after she brought the Fernandina French dip. The entrée was a sight to behold. It consisted of a toasted brioche bun, braised short ribs, creamy horseradish sauce, caramelized onions, and provolone cheese.

The bun had a soft, springy texture, and dipping it in the au jus added to the already heavenly flavors. The ribs were braised to perfection, and the horseradish sauce paired with the caramelized onions had a fragrant and sweet sapidity. Each bite was an excellent symphony of flavors.

The dish also came with salt-n-pepper fries, which were delectable. They had a light and crispy texture, with the inside being fluffy. The ketchup provided had a nice zing, which complemented the bites you’d get where the pepper would poke through.

I had planned for this to be the end of my dining experience, but when asked about dessert I asked what would be recommended. Carol suggested the Oreo cheesecake, and I’m glad she did. A magnificent slice came out, with two dollops of whipped cream on each side of the plate. The cheesecake itself was velvety and the Oreos inside offered a unique, textural crunch.

My overall impressions of the new menu were positive. The ingredients, atmosphere, and overall friendliness of the staff were superb. You’d be hard-pressed finding another spot to soak up the ambiance of historic Fernandina with such flavorful food.

Very nice article. We loved the restaurant when Amy and Hillary were the owners and we miss them, and their crepes so. A new day and a new menu and the beat goes on. Thans to Dylan for this update and shining a light on this most deserving business in our town.

The Patio at 5th & Ash is excellent. Try the drunken Cheese Bread appetizer is a must. Well trained staff and solid, consistent food makes this place a winner.

Great place….. food is delish, staff is friendly & helpful & the owner Scott greets you to make sure you are taken care of. What more do we want?﻿﻿

I love the new Patio Place, bit overpriced but that’s the trend everywhere.

Always found it hilarious that people thought $10 crepes was a good deal. $0.50 worth of ingredients, so dumb. Good riddance to the old place.

What a super review Dylan. My wife and I are new to the island and also recently visited The Patio. We will definitely visit again… Now if only a crepe shop was in the immediate area.

I look forward to trying this place out!!

Excellent review, eager to visit and try for myself!

One of the great values of media is to inform with data and ...
wpDiscuz
9
0
Would love your thoughts, please comment.x
()
x
| Reply
Comment Author Info