Editor’s Note:  The Fernandina Observer staff is taking a 3-day weekend break during July 4th   We will return on Tuesday,  July 6.  For your weekend entertainment, we are re-posting a few articles from the past.   We wish you all an enjoyable weekend. 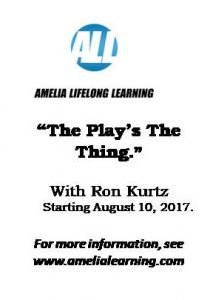 My daughter, grandchildren and I were in California in June. One of our stops was the Warner Brothers Studio tour in Los Angeles. The tour took us through the back lot with the settings for towns. We saw displays on set decoration, wardrobe, music and all of the other elements vital to making a movie.

As we toured the area set up as a town, our guide talked about the set designers having to make sure the windows of store fronts were either frosted glass or had furnishings behind them so you didn’t look into an empty room. She also told us that in scene changes they often positioned some object so that your eye would notice it and assume continuity.

Throughout the tour, I found myself saying, “Yep, Ron told us that.” Last year, Ron Kurtz did a short course in turning the written word into live theater. He talked about set decoration, making sure that a door didn’t open on to empty space, and making costumes match the period and the characters. At Warner Brothers, I realized what good preparation the course had been to help me to understand a little of the work behind the magic of film.

Last year Ron discussed directing “Arsenic and Old Lace.” That play presents unique challenges as it is a comedy that is very familiar to most of us. This year he will discuss directing “Wit,” which will be challenging in very different ways. Ron will take us through casting the play, both from the perspective of individual roles and the ensemble cast. He will talk about the settings and the choices that are made in staging the play.

This is a play whose theme is mortality. It needs to be uplifting without being sappy; to look at an unpleasant reality and find value. If you have a chance, search for the play on Google and take a look at the photo that advertised the New York run. You might also look for the photo that was the cover of the movie DVD. In both cases, the actresses’ expressions are neither happy nor sad. The best word I can think of to describe their look is transcendent. Presumably that’s the feeling the playwright was going for.