At 11:52 PM on June 26, 2022, units from the Fernandina Beach Fire Department and Nassau County Fire Rescue were dispatched to the report of a ship fire located at 231 N Front Street. The Coast Guard received a distress call from a cargo ship that was docked at the Port of Fernandina’s north terminal pier, reporting a fire in the cargo hold of the vessel.

Upon arrival, firefighters found a six-hundred-foot cargo ship with heavy smoke coming from one of the ship’s five cargo holds. The ship’s crew was attempting to extinguish the fire with onboard fire suppression lines upon the arrival of the first fire units. It was determined that a fire had started within the number five cargo hold loaded with stacks of bundled plywood being unloaded at the port.

Firefighters could not enter the cargo hold to attempt to bring the fire under control, so water streams were applied to the compartment from above with hose lines and an aerial apparatus. Due to the unstable nature of the cargo and the unknown location of the fire, firefighters had to flow water into the ship’s cargo compartment continually. Firefighters worked to keep the fire from spreading to other areas of the ship’s compartments.

Thirty-five firefighters battled the fire until 4:18 AM when the fire was determined to be under control. Firefighters officially called the fire out at 6:17 AM. There were no reported injuries to the ship’s crew.

One firefighter was transported to Baptist Medical Center Nassau with a non-life-threatening injury. The fire’s origin is unknown and is currently under investigation by the United States Coast Guard Investigations Division.  The cause of the fire has not been determined and will take some time due to the condition of the cargo hold. 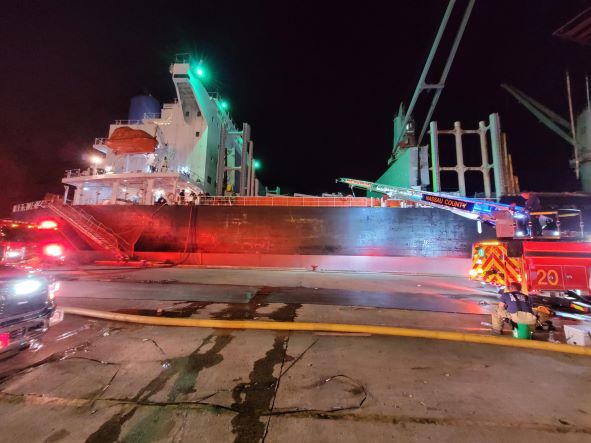 This unfortunate incident turned out ok. It could have been much worse. I commend our local firefighters!!!

Are we really prepared for a full on ship fire here at the port??

I’d like to also know who bares the cost of this? Taxpayers of FB? The ship owner? Port? I’m tired of paying taxes to support a failed government

If you are shipping goods on that vessel and you don’t have insurance for it, you may become liable for additional handling costs, transportation costs, which you would have to pay or bond the cargo out before you can receive it.

The cost is based on the prorated value of the belongings on the ship, and not paying is like abandoning a storage unit.

The company would have the right to sell that stuff off to recover its money, but it would play out in lawsuits and take years to resolve.

Moral of the story, if you are in Supply Chain you always want to insure your product. These companies with cargo on the ship just lost their cargo plus now they’re on the hook for damages to the ocean vessel and ecological cleanup.

Given the size of this fire, the proximity to all the plywood and paper being stored in the warehouses and the wood historic structures in the surrounding area, this could have been the match in the tinder box that ripped through our city.

Thank goodness for the Fire Depts working together on this. Thirty five responders and rigs and equipment for 7 hours. Pretty nice deal for the Port, which pays zero in taxes for city services, and has not paid the “Payment in Lieu of Taxes” of $50k/year for years.

Wat is the protocol to alert the public of impending danger at the port?
What if the ship blew up or ignited toxic materials? What is the warning system for the residents and even port workers? Is there an evacuation program?

We have been asking these questions for years. Will it take someone dying or getting hurt to put emergency protocol and education in place?

Perhaps what the Port should be investing in is increased safety and efficiencies on their existing campus rather than requesting more grant money to add warehouses and expand further into the surrounding residential area.

Tammi: I have discussed your concerns with Fire Chief Ty Silcox and asked him to respond to the email you sent me. When I get his responses I’ll also post it.

What happened to the water that was put into the ship’s hold to put out the fire? Was it pumped out into the river? If so was it treated in anyway? The water used to fight the fire was supplied from a private fire hydrant owned by the port but receives its water supply from the city water system. The water was left in the cargo hold and left in the care of the Port Manager, the ship’s Captain, the vessel owners and the US Coast Guard.

Were emergency services directed to respond without sirens to the incident? If so by whom and why? Emergency services were not instructed to respond without lights and sirens to this incident. Lights and sirens are used when traffic, weather and road conditions warrant. Units always use warning lights when responding to emergencies but refrain from using sirens when possible. All apparatus that responded to this scene (as seen in photos) had emergency lighting on during the incident. There has never been any deals or understandings between the fire department and any agency, company, or person to not use emergency lights or warning systems when responding. Some residents will request the fire department to not use emergency warning devices when we respond to their homes. This not accommodated if the call or response environment warrants.

How much specific training do City and County fire fighters have in managing a fire on a cargo ship? The City and County do not have shipboard firefighting training specifically, however, fire personnel have hundreds of hours of training in fire suppression.

How much specific training do City and County fire fighters have in managing a fire in a industrial complex with large amounts of toxic chemicals. The firefighters that respond to fires of all types have hundreds of hours of training. All fires have unique properties that the fire service must deal with. All fires are made up of four components: heat, oxygen, fuel, and a self-sustained chemical reaction. Every fire that your firefighters respond to are toxic in nature due to chemicals in burning materials. Many of our personnel and Chief Officers have specific training in hazardous materials response and can identify when the regional hazmat team needs to be called in for mutual aid.

What is the evacuation plan for the area surrounding the port for and industrial fire/spill/accident? The fire department’s number one priority in any response is life safety. The specific contents of an evacuation plan are protected; however, notification can be given to residents in multiple ways if a situation warrants an evacuation. Reverse 911 calls, Everbridge and IPAWS are systems that we can use to notify specific locations through geo-fencing, and law enforcement can conduct door to door notifications.

Under what circumstances would the evaction plan be put into effect? When sheltering in place is not an option for the protection of life.

What challenges were encountered in fighting the port fire? Only having one aerial device to get water up over the fire. The environmental conditions and limited personnel to rotate in and out of the fire scene also was a challenge.

What changes, if any, does the City emergency response need to make in anticipation of the reoccurence of another ship fire? Replacement of our ariel device with a reliable apparatus and adding a marine asset that could be deployed quickly if needed. The mutual aid marine asset (Jacksonville Fire & Rescue) has a 1.5 to 2-hour response to the port and the city’s marina, this can make a big difference in an event that requires cooling of a vessel’s exterior or protection of multiple vessels. Additional firefighting foam readily available on site if needed during an expanding incident. I have begun discussions with the port manager to get this in place.

An example of why the Port should not be allowed to dock ships which contain potentially hazardous material.

Bob, it was plywood for goodness sakes. What the source of the combustion was remains to be determined. A considerable safety issue that needs further discussion.

I live on Escambia St. and have for close to 7 years. The ship fire is a serious concern for a variety of reasons. The basic fire itself but more importantly that I never heard a siren from any fire, police or port warning system and I was outside at 12:30 with my dogs.

The ship itself is approximately 400 yds from my house at most and closer to other homes on 3 rd St. and we were given no warning whatsoever.

This is the same type of issue that occurred a few years ago with Westrock. I was outside lifting weights and running as I diid 4-5 nights per week. All of a sudden I could not breathe during a short run and had severe pain when tried. I ended up at Baptist E-room for 7 hours and was told I had chemical burns in my lungs – mild but painful. I had no idea how it could have happened. I called Westrock the next morning and after getting the run around ended up speaking with Ashley Quarles – The Environmental/Safety Mgr., who has since passed away, and after answering her questions about not litigating she advised me a Lime Diffuser tank had exploded, the FB Fire Dept. responded, WITHOUT SIRENS because that was their ‘deal with COFB’ and hit the tank with water which aerosolized the Lime. The wind blew it right over to our homes on Escambia, 3rd, Dade and the whole area. It is a caustic substance that caused the chemical burns into lungs.

When I asked why no alarm siren went off I never received an answer. I was told the Westrock has a ‘deal’ with COFB to not use sirens when responding so as not to panic the population.

Some ‘deal’ – I could have been seriously injured and they told me at the hospital it would have been extremely serious for anyone with asthma, who was sick and the elderly. Ashley actually told me to check my car and remove the lime particulate matter with vinegar or it would ruin the paint and that’s what was in my lungs. It was all over my car the next morning.

Does the PORT have this same ‘Deal’ ? If so it needs to be dramatically revised so the local
Populace is
Made aware of fires, chemical releases, crew jumping ship and running through the marshes and any other potentially hazardous or dangerous situation so we can protect ourselves and or evacuate if needed.

The City better do something before someone gets seriously hurt. The current warning system is totally inadequate and potentially dangerous.

Barry, put the question in writing to the City Manager asking if there is such a “deal” with any company. You heard just from one of the parties. Always good to have at least two sources to corroborate a “fact”.

That needs to change. I’m sorry you experienced that. But grateful you’re here to tell.

Great job by the Fire Department and a stark reminder of the need to know about the shipment of hazardous chemicals through the port, particularly those that can’t be extinguished with water.